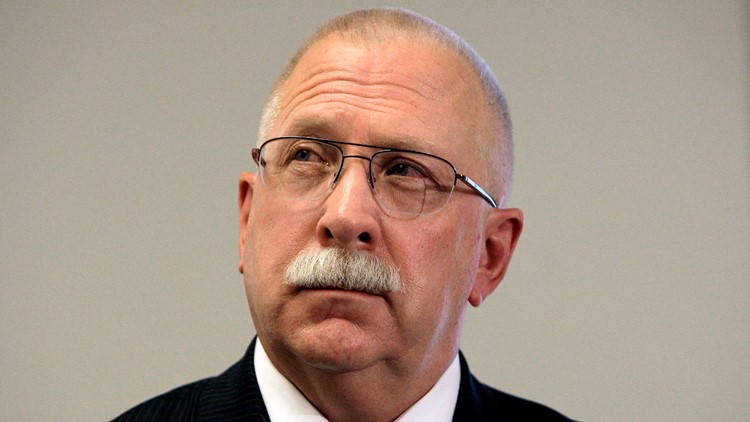 Photo by: AP
FILE - This Aug. 19, 2010, file photo shows Arizona Corrections Director Charles Ryan at a news conference in Phoenix. The embattled director of the Arizona Department of Corrections is resigning. Charles Ryan notified Gov. Doug Ducey on Friday, Aug. 9, 2019 that he plans to retire on Sept. 13 after more than 10 years at the helm of Arizona's prison system. Ryan has faced growing pressure from civil rights advocates who started a "Fire Chuck Ryan" campaign over alleged inhumane conditions in prisons. (AP Photo/Ross D. Franklin, File)

PHOENIX (AP) — Inmates have asked a federal judge to take over health care operations in all state-run prisons in Arizona and appoint an official to run medical and mental health services due to the state's repeated failure to improve the care.

Attorneys representing 34,000 inmates said in a filing Friday that the state has failed to fulfill many of the improvements to inmate care that it promised nearly five years ago when the case was settled.

The takeover request marks an escalation in the litigation in which the state has repeatedly been accused of dragging its feet. Previously, the state has been fined for failing to follow through on its promises.

In the latest request, the inmates requested a receivership be ordered to run health care operations in prisons and asked the judge to follow through on her earlier threat to impose a second contempt-of-court fine against the state for noncompliance.

The first fine, which was imposed last summer, was for $1.4 million. The second possible fine could be as much as $1.2 million.

Lawyers for the prisoners say the first fine resulted in no improvement in the state's performance.

"Instead of describing what they did to provide the promised health care, such as hire more staff, defendants fill the record with the same tired excuses that they have used for the last five years," attorneys for the prisoners wrote.

The Department of Corrections released a statement saying it's reviewing the receivership proposal and will later respond in court.

In a past filing, the agency has said officials took all reasonable steps to comply with the judge's orders, but that a switch this summer in the state's contractor for health care in prisons led to unexpected difficulties outside of the state's control.

Patrick Ptak, a spokesman for Gov. Doug Ducey, declined to comment on the proposed takeover, citing the pending litigation.

A year ago, Corrections Director Charles Ryan was found to be in civil contempt and the state was fined $1.4 million for noncompliance.

Since then, the judge overseeing the case has raised the possibility of throwing out the settlement and threatened a second round of contempt fines.

In the past, similar receiverships have been ordered for prisons in other states, including California.

In 2005, a federal judge seized control of California's prison medical system after finding that an average of one inmate a week was dying of medical neglect or malpractice. He appointed a receiver, who retains control of the medical system, although operations at individual prisons are gradually being returned to the state's responsibility.

The lawsuit that prompted the change in California and a similar suit over poor mental health treatment of inmates led a panel of judges to declare that record prison crowding was making it impossible to improve conditions to constitutional standards.

The judges put a cap on California's prison population that forced a dramatic drop in the number of people in prison as the state eased criminal penalties, kept lower-level offenders in county jails and increased opportunities for parole.

In the Arizona case, the state has followed through on some of the promised improvements.

But lawyers for the inmates said the state hasn't complied on several performance measures, such as ensuring newly prescribed medications are provided to inmates within two days and making medical providers tell inmates about the results of pathology reports and other diagnostic studies within five days of receiving such records.

The lawsuit alleged that Arizona's 10 state-run prisons didn't meet the basic requirements for providing adequate medical and mental health care. It said some prisoners complained that their cancer went undetected or that they were told to pray to be cured after begging for treatment.

The state denied allegations that it was providing inadequate care, and the lawsuit was settled without the state acknowledging any wrongdoing.

Though the state paid the $1.4 million fine that was issued last summer, the company that at the time provided health care services within the prisons later reimbursed the state for that amount.