A Navajo Code Talker and his wife of 66 years want to move back into the house they raised their children in. So a veteran's association made it happen. 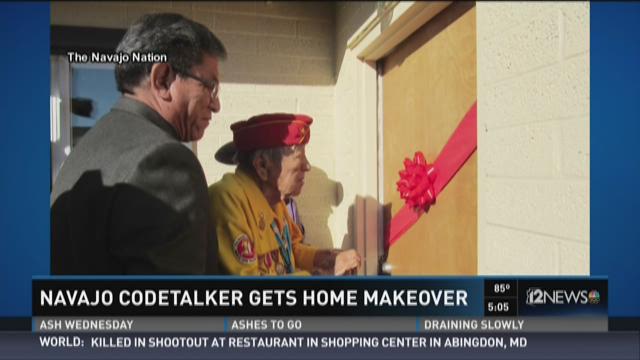 TUBA CITY, Ariz. -- Navajo Code Talker Dan Akee built his own home on the reservation shortly after World War II. He raised his children there, but over many years the home fell into disrepair and eventually he moved out.

Recently he and his wife of 66 years longed to move back in to that family home. They wanted to spend their remaining years together in the place they loved.

That's where the local veteran's association stepped in to help.

It organized dozens of volunteers this winter who worked weekends and nights to refurbish Akee's home to make his dream come true.

“It’s amazing to finally see the accomplishments of the efforts of so many volunteers,” Navajo President Russell Begaye said.

Last weekend the aging couple got their wish and were brought to see their old home that had been transformed into a beautiful new one. Family and friends helped them move in.

The Navajo-Hopi Honor Riders created a sign that's proudly displayed in front of the home. It reads “Home of a Navajo Code Talker”.

A finishing touch to a Code Talker's dream.