If a quake hit near the Arizona-California border at a rate of 7 or higher, it could do some serious damage in western Arizona. 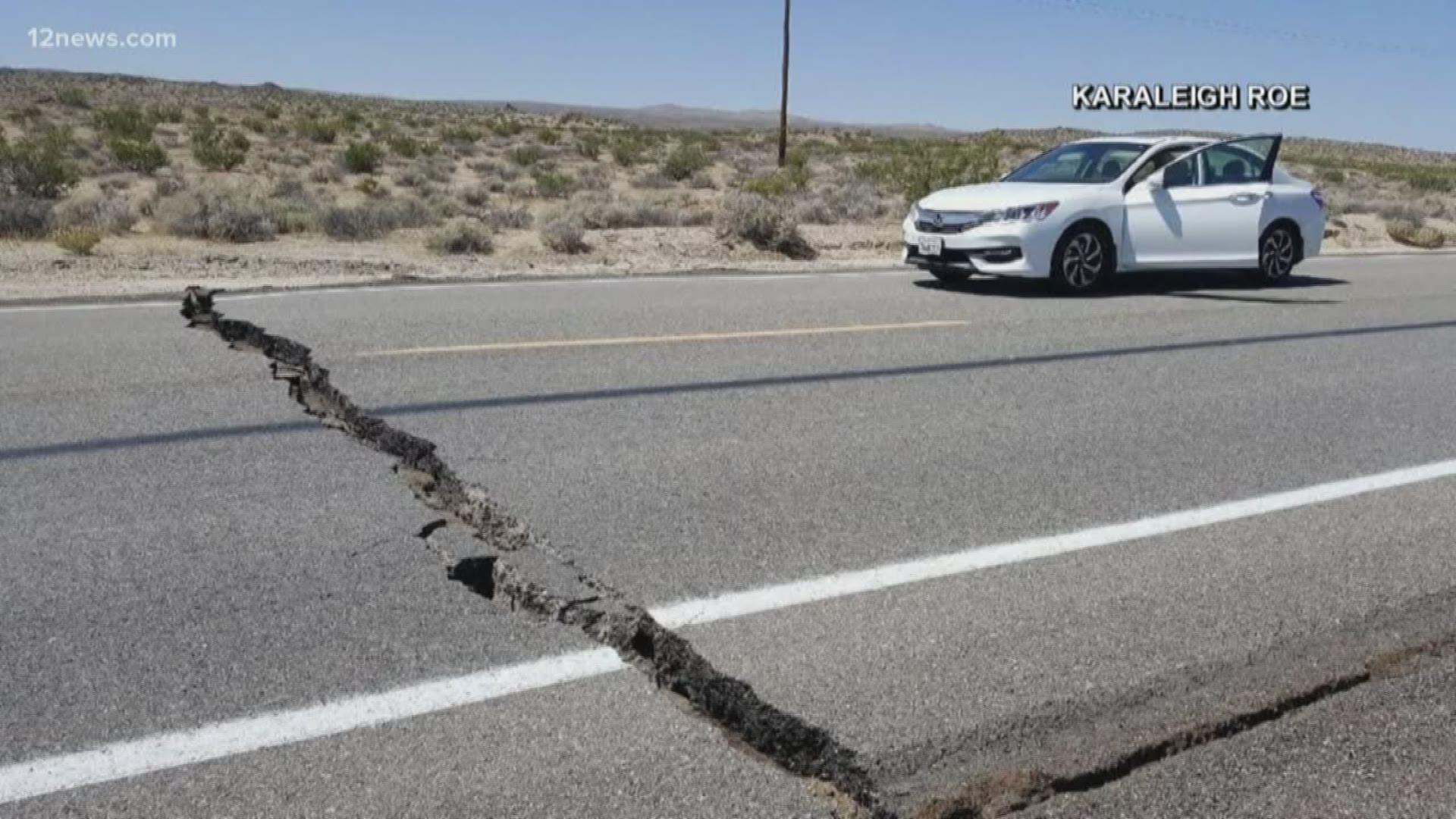 Earthquakes began rattling California Thursday, and they could persist for several months, according to scientists.

The Ridgecrest quakes were felt by thousands of people across the Valley and it has many people wondering could we experience a big one here, being that we’re so close to California and the massive San Andreas Fault.

12 News spoke with Dr. Lucy Jones, who’s one of the world’s leading experts on earthquakes, to get her take on what could potentially happen in the Valley if the San Andreas Fault was to rupture.

The images are being shared across social media, two earthquakes rocking Ridgecrest, California and the shock waves being felt all the way in Phoenix. But how is that possible?

"The high-frequency waves disappear, but the long period frequency waves continue to travel farther. So the bigger earthquakes put out a lot more energy at that long period and they can be felt over a very wide region. So, we’re not at all surprised it could be felt in the Phoenix area," said Dr. Lucy Jones.

RELATED: Californians urged to prepare for 'Big One' after weekend quakes

Dr. Lucy Jones is a world leader when it comes to earthquake research. She says the good news is the earthquake strength is dissipating in the Ridgecrest area, but more quakes will be coming.

"It is dying quickly. That being said, the people in Ridgecrest will be feeling earthquakes for many months to come, we just highly doubt and it’s unlikely they’ll be one big enough to be felt in Phoenix," said Dr. Jones.

What many people across Arizona don’t know is that we’re about 150 miles or so from the massive San Andreas Fault line and that the Interstate 10 runs right across.

If there was a magnitude 6 to 7 quake near the Arizona border close to Indio, it could cause major damage to Yuma and lots of infrastructure damage near the border.

"It is going to be felt in Phoenix and in Tucson. The fault extends on the eastern side of the Coachella Valley. You’ll feel it reasonably well. Interstate 10 as it goes through the Coachella Valley actually crossed the San Andreas Fault many times. So repairing that freeway is going to be difficult and time-consuming. There’s a potential to affect the electric grid across western North America," said Dr. Jones.

RELATED: Where could a major earthquake hit in Arizona?

Dr. Jones says it’s impossible to predict when and where the San Andreas fault will start to move, but each year the probability it will hit grows stronger.

"Two percent per year. That’s one in 20,000 in any given day. It’s about the same ballpark as being in a car accident," said Jones.

Dr. Jones says it would be wise if the state raised their standards for building codes so they can be a resource if a massive earthquake struck along the San Andreas Fault.