Tony Lester's voice lives on through his aunt

Anyone who knows Patti Jones, knows she's a tireless, passionate advocate for mental health care reform and treatment inside Arizona's prison system. She knows all too well what can happen when a severely mentally ill person is sent to prison. 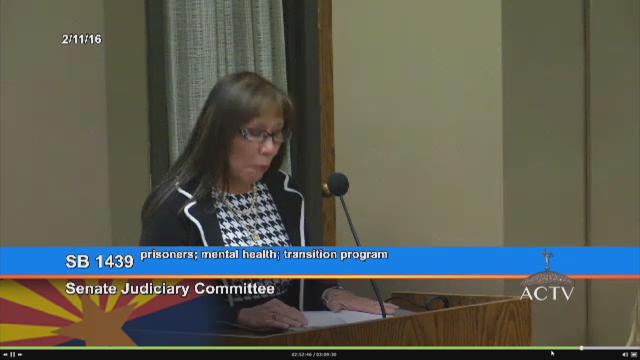 She knows all too well what can happen when a severely mentally ill person is sent to prison. Her nephew, Tony Lester would not live to tell about the treatment, or lack thereof, but a video would speak volumes and reverberate around the world.

The video recording shot by an Arizona Department of Corrections officer at the state prison in Tucson captured Lester's final moments. A dying man, who'd slit his throat, wrists and groin all because he was given the means to do so. Lester was mistakenly issued razors in a bedding packet he was given by corrections staff.

That video was shot by corrections officer Humberto Hernandez, who was doing what he was told to do to document the incident. It would reveal the corrections officers did not render any aid as the 26-year old, first time offender, diagnosed with paranoid schizophrenia bled to death.

Tony Lester had written the word "Voices" in his own blood while committing suicide inside a Tucson prison. Source: Arizona Department of Corrections

But getting a copy of that video would prove to be an uphill battle. There were attempts to cover up what happened to Lester. The Department of Corrections got a protective order on the video shielding it from public scrutiny. It would take years and a long protracted legal battle to secure a copy.

Judge Talamante also indicated he was inclined to award KPNX attorneys' fees. In the end, the DOC paid more than $26,000 to KPNX for its wrongful denials of that video. A video that would expose the truth about the corrections officers' response to Lester's suicide.

The video would lead to the February 2013 report: "Watching Tony Die."

Since Lester's death on July 12, 2010, his aunt, Patti Jones, has been on a mission. On Thursday, Jones offered testimony about her nephew's death to the Arizona Senate Judiciary Committee regarding Senate Bill 1439. The Prisoner, Mental Health Transition Bill aimed at reducing recidivism for people with serious mental illness.

The sponsor of the bill among others is Sen. Nancy Barto, Vice Chairman of the Judiciary Committee who represents Legislative District 15, which encompasses North Phoenix and Northwest Scottsdale. Senate Bill 1439, if passed would require Arizona Department of Corrections Director Charles Ryan to establish a mental health transition pilot program for offenders who are released on community supervision and who the DOC determines would benefit from mental health care.

A topic near and dear to Jones' heart. She delivered an empowered speech and plea to lawmakers to act before it's too late. As Tony's voice, Patti Jones knows the consequences of inaction and she was forthright and poignant in telling them so. So much so, Jones and other advocates who offered testimony before the committee were acknowledged by the lawmakers with a rousing applause.

Senate Bill 1439 passed through the Senate Judiciary Committee and now heads to the Senate floor. The Department of Corrections says it has not yet determined the fiscal impact on the state's General Fund associated with this legislation.