Justified or excessive force? Felon missing chunk of his leg after K-9 used in arrest

The man agreed to talk with 12 News from inside the Maricopa County Jail. Wearing an orange jump suit, handcuffs and shackles he showed us his leg and talked about his 2017 arrest saying what law enforcement did to him was "messed up."
Author: Kevin Kennedy
Published: 12:53 PM MST April 25, 2018
Updated: 2:43 PM MST April 26, 2018

Carlos Castro spends most of his day in a small Maricopa County jail cell. The convicted felon booked on charges of endangerment and a shooting.

The incident took place back in March of 2017. According to police, Castro was with his girlfriend, Ashley Benton, visiting a friend’s house in Peoria. While there, police say he got into an argument with his girlfriend’s brother. The report includes several witnesses who say Castro fired multiple shots in the direction of several people.

Peoria police responded to the scene but were unable to locate Castro or his girlfriend. A few days later the couple is accused of trying to steal items from a department store in Glendale. According to the police report, Castro assaulted the theft prevention officer before leaving the store.

A task force was put together to find and arrest Castro before anyone else got hurt. Officers from Peoria, Glendale and DPS tracked Castro to a home in Peoria on March 11, 2017. Tactical units swarmed the house and moved in to make the arrest.

“In a matter of seconds they came in with their guns raised and flash grenades being thrown,” Benson said.

Castro was able to sneak out the back and get away before the tactical team caught him. Officers quickly spread out in the neighborhood in hopes of catching Castro before he got too far.

After a brief search of neighbors' yards and homes officers spotted him up on a roof. At least eight officers moved in and surrounded Castro. Several yelling at him to “get down” or “show me your hands”.

The scene was tense, chaotic and rapidly unfolding,

“Several of them [police] are shouting commands at the same time, it can be confusing for the suspect,” Isabella Maldonado, 12 News' law enforcement expert, said.

DPS body camera video, obtained by 12 News, shows a shirtless Castro sitting on the edge of a roof about nine to 10 feet high. At times you can hear him yell, “I’m done,” as he raises his hands. Seconds later his hand appears to lower near his waistband. At that moment, a Glendale police officer deploys his Taser striking Castro.

The first deployment appears to be ineffective as Castro continues to yell back at officers and readjust himself on the roof. Five seconds later you hear Castro yell, “I’m done, I don’t want to fall,” that’s when the officer deploys his Taser again.

“This would have been an opportunity to back off and establish a perimeter and negotiate with him,” Maldonado said.

At this point the view from the body camera is obstructed, but Castro either falls or jumps from the roof. At least two officers immediately jump on him, Maldonado said the basic technique is to latch on to a suspect’s limbs to immobilize them.

It’s unclear what was taking place as the body camera does not capture the scuffle and effort of police to detain Castro. You can’t tell if Castro is resisting or making movements that would lead police to think he is reaching for a weapon.

As officers try to handcuff Castro a police K-9 can be seen within a few feet barking. The camera then shows the dog bite down on Castro’s left leg, shaking it violently.

“I felt him [the dog] going crazy it was horrible,” Castro said.

The convicted felon agreed to talk with 12 News from inside the Maricopa County Jail. Wearing an orange jump suit, handcuffs and shackles Castro showed us his leg and talked about that night.

“It was messed up what they did to me,” Castro said. “I don’t have any feeling in my leg, I walk with a limp.” 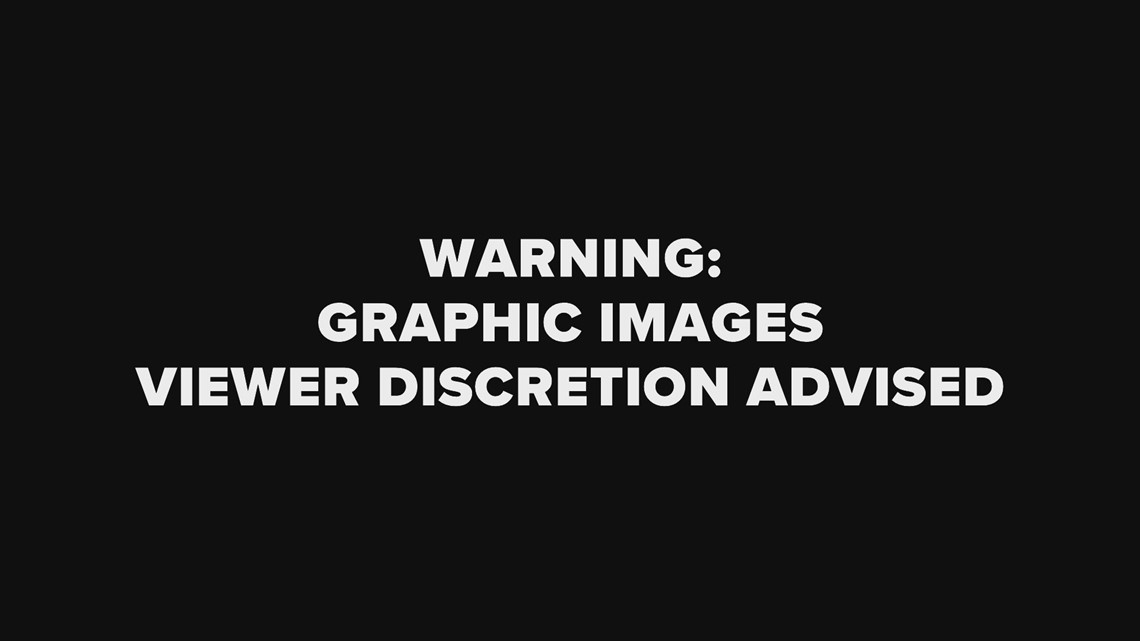 “It does seem like from what I can tell officers had sufficient containment on him,” she said.

The former Washington D.C. police captain says it’s hard to know everything that is going on and that the video only gives you a slice of what was taking place. She goes on to say unless you know every aspect of what was going on it’s possible actions that seem excessive were not at all.

DPS and Glendale police both conducted internal reviews of the incident.

DPS concluded its K-9 handler did not violate any policy or procedures and was not disciplined. Castro accepted a plea deal that included aggravated assault and reckless endangerment.

Glendale police determined their officer who deployed his Taser was out of compliance.

The department sent a statement that read:

“The discipline was for a policy violation concerning the use of a taser. Our department policy states the taser should not be deployed when the risk of secondary injury is greater than the need to make an immediate arrest. Ofc. Johnston’s discipline was counseling and remedial training.”

Castro has filed a notice of claim and a complaint against the state, Peoria, Glendale and DPS. The complaint includes a count of negligence, battery, intentional infliction of pain and excessive force.

It is unclear how much money Castro is seeking connected to the notice of claim.