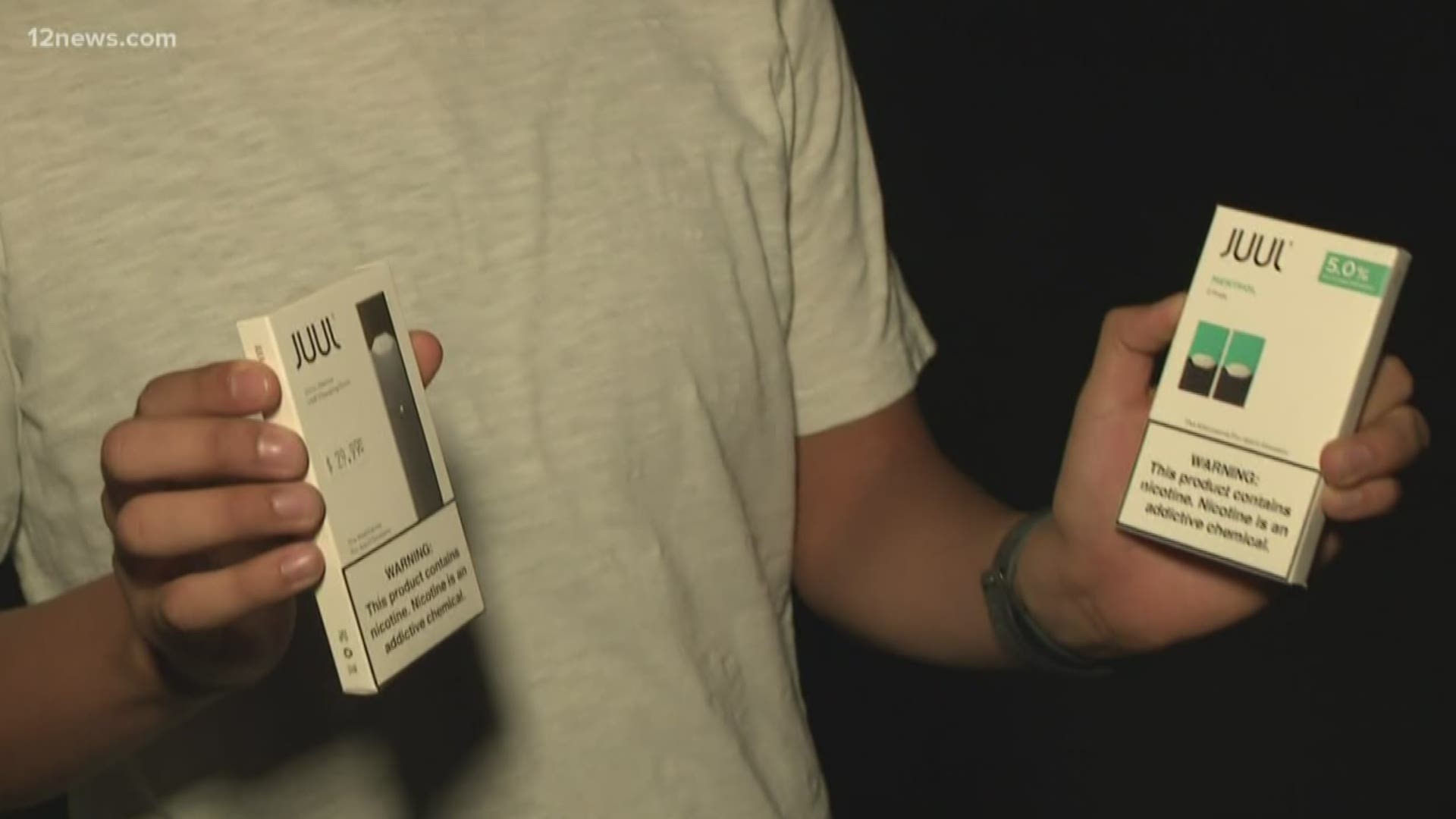 Grocery stores, convenience stores and tobacco shops that are supposed to be gatekeepers of nicotine products are instead helping to usher in a teen vaping crisis.

Investigators say the failure of stores to verify the age of buyers is contributing to a renewed crisis of teen tobacco use.

“A few years ago, we were making great progress,” said Erika Mansur, an investigator at the Arizona Attorney General’s Office. “We saw fewer and fewer kids smoking and stores getting better and better not selling to kids. And all of the sudden we’ve got these products and addiction rates through the roof, and stores are selling to kids again.”

The team of investigators at the Attorney General’s Office have limited resources for conducting undercover inspections. Therefore, investigators say if a store is found in violation it likely represents a systemic problem at the store.

“It’s once for us, it could be hundreds of kids that are going in there and getting them,” said an undercover investigator for the Arizona Attorney General’s Office.

Stores that fail inspection are subject to citations for both the clerk and store owner. Citations amount to $300 but the fine is waived if the recipient attends a diversion class.

Arizona Attorney General Mark Brnovich wants state lawmakers to follow the lead of other states and increase penalties for repeat offenders and include the possibility of jail time.

“The way the law is written right now, it doesn’t matter if you are a first-time offender, or if this is your tenth time being busted. It’s the same fine structure,” Brnovich said.

An analysis of state and federal records by 12 News also found:

- The worst offender since 2014 is Gill & Sons Valero, located at Bethany Home Rd. and I-17. The convenience store has failed nine times. 12 News was unable to contact the owner of the store.

The below map shows the locations in Arizona that were warned, fined or cited for selling tobacco products to minors from Jan. 1, 2019 to Feb. 04, 2020.

12 News followed investigators over two evenings recently to observe undercover inspections in west Phoenix and Tempe. The law states if someone appears 27 years-old or younger, store clerks must ask for ID. When the inspections that 12 News observed took place, stores were prohibited from selling to customers under 18-years-old.

A new federal policy at the beginning of the year increased the age to 21. Out of 20 stores inspected, during the two nights, 12 News observed six stores sold tobacco products to an undercover minor.

One offender was Tempe’s Up in Smoke, located at Mill Ave. and Baseline Rd. The store had five previous violations. On this day, the undercover minor was a 16-year-old girl who asked to purchase a vape cartridge. She was carrying a valid state ID that reflects her actual age.

“He asked for my ID, he looked at it. I asked ‘is there a problem sir?’ and he said ‘no there’s not a problem’,” said the girl, whose identity is not being publicized.

The clerk proceeded to recommend to her a vape cartridge with even higher nicotine content than what she requested. When 12 News confronted the clerk immediately after the sale, he declined to comment.

It’s not just smoke shops found violating the law. Inspection records show prominent gas stations and grocery chains are routinely caught. During the inspections observed by 12 News, one of the six businesses caught was Food City, located at 35th Ave. and Glendale.

The Food City clerk sold a pack of cigarettes to a 15-year-old without asking for an ID. In response to the citation, the parent company Bashas’ Family of Stores told 12 News the clerk involved had been properly trained on alcohol and tobacco sales and was relatively new.

“Immediately following the occurrence, that member was disciplined in accordance with our policies in addition to attending a retraining program,” a Bashas statement reads. “The case was ultimately dismissed by the judge after reviewing our corrective actions that were taken.”

Big name companies that racked up many violations over the past three years include Safeway and Circle K. Both companies tell 12 News they take seriously the obligation to prevent tobacco sales to minors.

Safeway had 26 failed inspections, including one Safeway store in Goodyear that committed five violations over a three-year period. That store, located at 480 N. Estrella Parkway, is the target of a 2019 civil case by the FDA that seeks a $5,705 penalty. A spokesperson for Safeway tells 12 News its approximately 10,000 employees at over 100 Arizona stores undergo rigorous training.

“In the event of a violation, we conduct an internal investigation, require employees to be retrained, and we leverage training provided by Arizona’s Retail Tobacco Training program,” said Albertsons Safeway spokeswoman Nancy Keane.

Ninety Circle K stores failed inspections over the same three-year period. A company spokesman says employees are trained to go beyond what’s required by law by requesting proper identification from anyone who looks 40 or younger. The company also hired an external auditing company last year “to shop its stores to verify that employees comply with our strict identification requirements.”

“We have seen steady improvement in our employees’ pass rate since then,” Circle K spokesman Laurence Leroux said.

For investigators at the Arizona Attorney General’s Office, the teen vaping epidemic represents a major setback in their efforts to keep tobacco out of the hands of minors.

Brnovich said teen vaping is one of the most common subjects parents discuss with him when he travels the state.

“If we don’t do something about this now and if we are not aggressive about it, we are going to have a whole generation that is going to be addicted to nicotine and tobacco products,” Brnovich said.

In Arizona, there have been 21 cases of vaping-related respiratory illness, according to the Arizona Department of Health Services. No deaths have been reported in Arizona; however, across the country 64 people have lost their lives to the illness and more than 2,700 have been hospitalized.

Center for Disease Control and Prevention