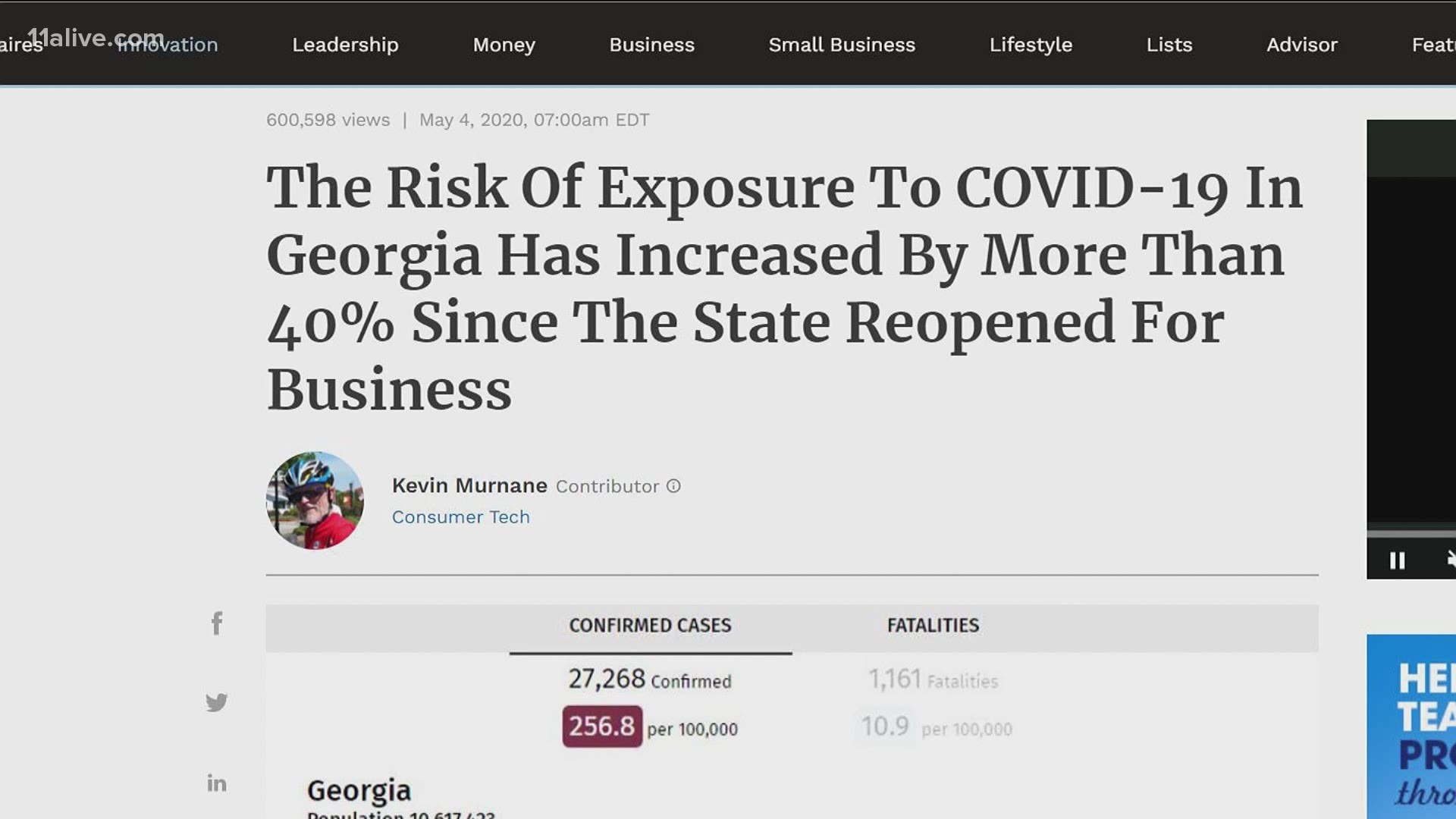 ATLANTA — A national news article about the risk of Georgians getting COVID-19 now that businesses are re-opening caught the attention of many, including Atlanta Mayor Keisha Lance-Bottoms and even the Georgia governor's office.

But a day later, Forbes has removed the article from its website after The Reveal, 11Alive's investigative team, found those who closely follow the number of cases in Georgia had serious questions about the accuracy of the article.

Titled “The Risk of Exposure to COVID-19 in Georgia Has Increased By More Than 40% Since The State Reopened For Business", the article had 610,605 views before it was deleted.

The headline was initially met with shock and confusion on social media.

Atlanta Mayor Keisha Lance-Bottoms shared a link to the article along with a screen capture of the headline in a tweet that said “For those who crowded at Greenbriar awaiting the new Jordans, gathered at Piedmont Pk, shot fireworks at the Mall West End & even those now shopping at Lennox Square Mall, know that the only thing that’s changed about Covid-19 is your chance of catching.”

RELATED: To those not social distancing, Atlanta's mayor has this message

“That's not what it's measuring,” Professor of Economics, Finance, & Quantitative Analysis J.C. Bradbury explained to 11Alive. Bradbury has been following the number COVID-19 cases in Georgia very closely, frequently questioning the data and calling out inconsistencies.

“There was absolutely zero evidence to support [the headline] and the numbers that were provided, it didn't show it,” Bradbury said.

Del Rio did retweet Mayor Bottoms’ tweet on Monday but says he was supporting the mayor’s message, not the article.

In the article, the self-described consumer tech writer uses the number of COVID-19 cases per 100,000 people in Georgia and the daily new confirmed cases to calculate Georgian's risk of exposure to the virus. The experts say this math doesn't exactly show what the writer thinks it does.

“Cumulative infection may not be the best measure,” Dr. Del Rio explained. “You actually want to measure active cases, because really, active cases are the ones that are transmitting. And that's the ones you worry about.”

Bradbury expanded on that saying, “the math is completely incorrect, in general. […] Certainly, the more number of people who have the disease, certainly increases your chances of transmission. But to then go from that to say, our risk was increasing, as that number was higher a week later, is completely wrong, because that number [cumulatively] has to go up, it can't go down.”

Soon after 11Alive reached out to Forbes and the writer for answers on the calculations, the article disappeared. It was replaced with an editor’s note that says, “this page is no longer active. We regret any inconvenience.”

The writer did send two emails to 11Alive, explaining, in part that “calling the metric I used a ‘rate’ was an error on my part.” He goes on to say “incident rate is not the best measure…. a better measure would be confirmed cases that are contagious (which would possibly eliminate those who have been cured). It's unclear how long people are contagious after they have contracted the virus,” He wrote.

► Read his full explanation at the bottom of this article

“I think it points to the danger of when we look at data to be careful as to what we are retweeting,” Bradbury said. “I think that the general message behind the article is that Georgia opening up increases people in Georgia to more exposure. That's obvious. I think that that's very clear. And that's a correct statement. But the data doesn't show that.”

Dr. Del Rio says what the article did do was raise an important discussion about the fact that the epidemic has not disappeared simply because states are re-opening for business.

A spokesperson with the business magazine sent 11Alive a statement saying, “Forbes requires its contributors to adhere to strict editorial guidelines. This story did not follow those guidelines and was removed.”

11Alive also reached out to the Georgia Department of Public Health to offer some perspective on the claims made in the article. A spokeswoman said the article had been deleted by the time she clicked on the link. Mayor Bottoms’ office has not yet responded to a request for further comment. Her original tweet linking to the article has not been deleted.

The governor’s office said “no comment” now that Forbes has deleted the article.

Forbes now lists the writer as a “former contributor.” He sent 11Alive the below explanation when we reached out for comment about the article.

The financial toll of Covid-19: Beating the virus comes at a cost

Companies adapt workplaces to keep employees safe as they return