'She actually wished that he would pull the trigger': Mesa cop investigated for stalking, abusing female officers

Officer Scott Callender is back at work while the Mesa police department investigates an alleged pattern of violence and abuse against women. 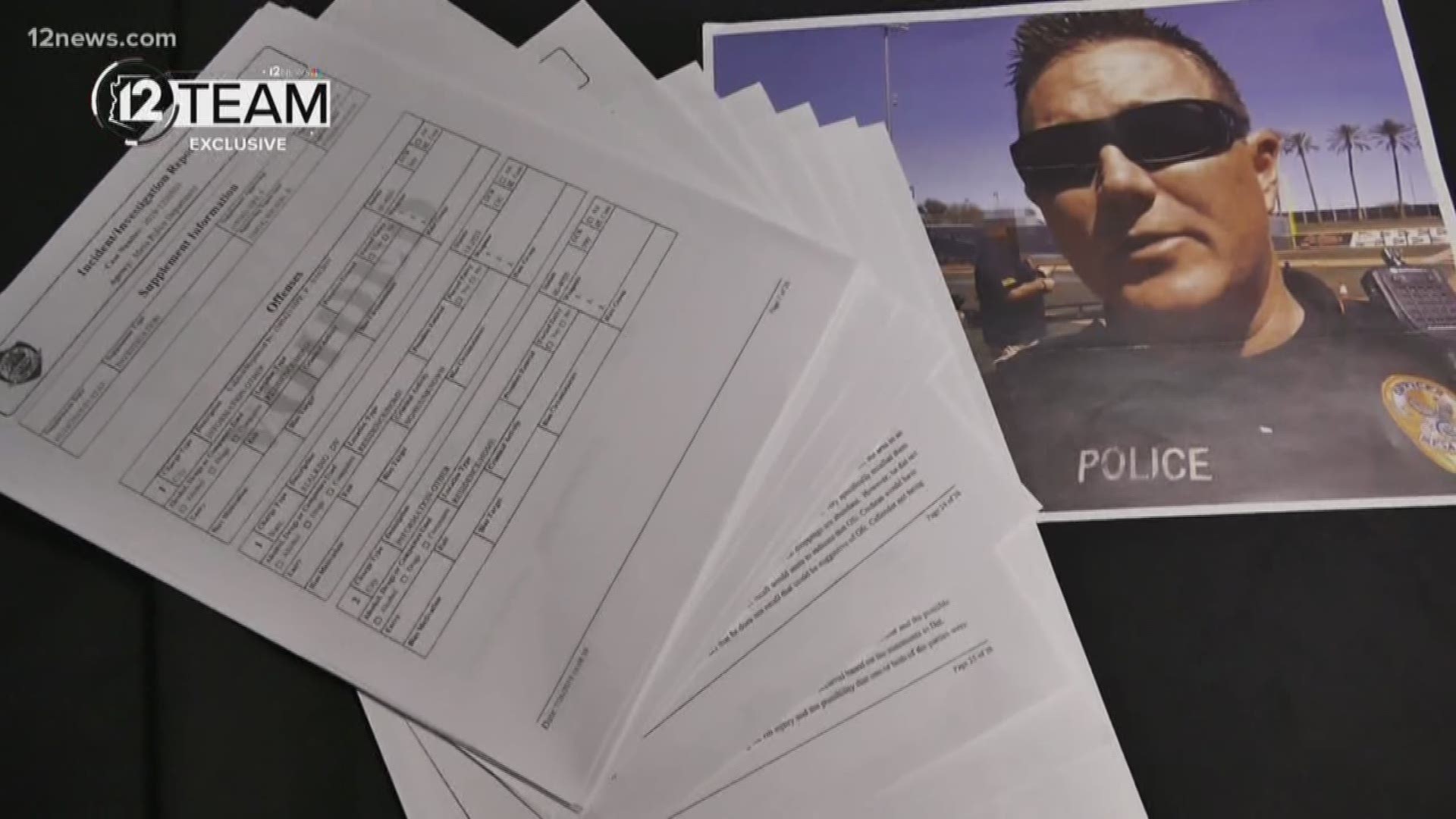 PHOENIX — A 24-year veteran of the Mesa Police Department is under internal investigation after three current and former police officers accused him of stalking and assault.

The allegations against Mesa K9 Officer Scott Callender date back to the very early days of his career with the department but are all coming to light now -- after a current girlfriend, a police officer in Gilbert told coworkers she had been assaulted in the past and was afraid for her safety.

The Mesa Police Department opened a criminal investigation on May 2 against the K9 officer to investigate allegations that Callender broke the officer’s ribs in 2017 and continued tracking her personal and work phones.

During the investigation, Mesa police Detective Paul Sipe interviewed at least three women who had previous relationships with Callender, all of whom were officers and all of whom detailed incidents of violence against them, including an alleged incident about 12 years ago where Callender pointed his gun at the officer’s chest.

“In that instant she was in such despair over the relationship that she actually wished that he would pull the trigger,” Detective Sipe wrote in his summary report.

The 34-page report concludes that no criminal charges will be filed against Callender. The report states that the allegations from his prior relationships are past the statute of limitations and that the current girlfriend declined to cooperate in the investigation.

The criminal investigation also concluded that “contemporaneous reporting… could have resulted on numerous occasions in the arrest of Ofc. Callender for multiple misdemeanor and/or felony domestic violence-related charges,” and that, in relation to the ongoing stalking and broken ribs allegation “there is ample reason to believe these incidents occurred.”

Officer Scott Callender is working in his full capacity as a police officer today, while an internal investigation is ongoing.

“Certainly we initiated the investigation when it was brought to our attention,” Mesa police Commander Ed Wessing said. “However, after 6 weeks of the criminal investigation we came to the conclusion, the department, we could not move forward with probable cause for criminal charges.”

"The decision was made by the chief and the executive staff to return him to his normal duty status," said Commander Ed Wessing with the Mesa Police Department.

“What would he say to get out of that one”

K9 Officer Scott Callender started working for the Mesa police department in 1994 and has since received multiple commendations and honors, according to personnel records.

After starting with the department, he quickly began a relationship with a fellow officer, according to the investigative report, provided to the 12 News I-Team by Mesa police in response to a public records request.

That officer, whose name was redacted to protect her privacy, left the Mesa police department in 2001, for a medical retirement.

Their relationship ended when the female officer told Callender that she wanted to leave him and that he “put a pistol to his head and threatened to kill himself if she left him,” the report states.

“She insisted she was leaving and Ofc. Callender became enraged and grabbed her by her shirt and tore the shirt as he pulled her up. He then punched Ofc. (redacted) in the mouth and the side of the face with his fist,” the report states.

She told the detective she reported that incident to Mesa Police internal affairs at the time, but that she “felt that her complaint had not been dealt with properly and that he should have been disciplined or fired for assaulting her in 1996.”

The Mesa police department said they do not have any records of a disciplinary process related to the allegation. The department's policy in 2014 was to purge files according to state statute, a spokesperson told 12 News.

However, Callender's personnel file includes a notice of suspension on June 23, 1997, for “failure to report all facts pertaining to an investigation and…disrespect of a fellow officer.” There are no additional details of the suspension.

The criminal investigative report further details allegations from a current detective, whose name has also been redacted to protect her privacy. Their relationship lasted from approximately 2005-2007, and she told the investigator that the two would fight repeatedly and Ofc. Callender would threaten to kill himself.

One incident detailed in the report alleged that Callender straddled her on a bed so she couldn’t move, and “had a pistol in his hand and he put it to his own head and said 'I’m going to blow my f****** head off.'"

The same officer told the investigator of another incident where Callender allegedly pointed his pistol at her chest.

The report states that she was in “such despair…she actually wished that he would pull the trigger.”

It goes on to say that she imagined herself dead and wondered “how or what would he say to get out of that one.”

The report states that the detective reported an instance when Callender was threatening to kill himself. Other Mesa officers investigated, including Dan Butler, who was a sergeant at the time and is now an assistant chief with the department.

Asst. Chief Butler was also interviewed during the criminal investigation and said of this incident, “there had been a domestic dispute and she was intending to leave the relationship.”

“(Butler) did not specifically recall the details, but that there was a threat of suicide by Ofc. Callender.”

Butler then told the detective according to the investigative reports that he instructed another commander to report the incident and that the commander was “dealing with the situation.”

"His word against hers"

In a relationship with a third Mesa police officer in 2010 and 2011, Callender allegedly continued threatening suicide and at one point threw her to the ground, causing her to bite her lip.

According to the report Callender “told her to go ahead and report it” and asked her "who she thought the police department would believe."

She told the investigators "she felt that everything in the relationship was his word against hers, and she felt the police department would believe him over her, especially based on his statement to her."

The investigative reports conclude that all three of these women reported portions of their encounters in the past and that each time “the department’s response was perceived by them to be either ineffective or not helpful.”

“This led all of these officers to understandably fear further reporting of incidents during and after their relationships with Ofc. Callender. All of these factors lead me to believe in the accuracy and validity of the statements given,” Sipe wrote.

“I think it’s important for people to remember that law enforcement officers have a lot of power,” said Tasha Menaker of the Arizona Coalition to End Sexual and Domestic Violence. “If you’re a survivor and you are being victimized by someone in law enforcement, that’s an additional layer of fear and that’s an additional barrier to coming forward.”

The sworn officers involved in this case, including Callender and the alleged victims, have all been admonished against speaking to anyone about the case and could face termination if they answered questions from 12 News.

12 News has reached out to Callender’s attorney but did not receive comment related to the case.

In a phone interview with Angela Callender, Scott’s ex-wife who is not an officer, she said Scott would act out of jealousy, but said she did not experience violence.

“I was married to him. It was my husband,” Angela said. “There’s always issues that occur in a relationship. But it, I was young. Some of it, I don’t know if that’s the normal or not.”

The two were divorced in 2007. Angela said she was interviewed by Mesa police during this criminal investigation of her ex-husband but said she had not seen the report and did not know what other women had said.

At least one of those Mesa officers who alleges abuse said she is still scared and leery of Officer Callender, according to the report.

Given that fact, 12 News asked the department why Officer Callender is back at work.  A department spokesperson tells 12 News the decision was approved by the chief himself and the women involved work different shifts than Callender.

A spokesperson for the city of Mesa, Kevin Christopher sent 12 News a statement that reads in full:

“The City of Mesa, as a matter of policy, does not comment on personnel matters or those with an open investigation. The City and the Mesa Police Department are committed to providing a workplace that is free from harassment, intimidation or bullying of any type. This conduct, in any form, is not, and will not be tolerated. All employees are required to take a mandatory training on discrimination and harassment. When information relative to such action is brought to light, these matters are taken seriously, investigated thoroughly, and appropriate action is taken by the City consistent with its zero-tolerance policy. In all instances, the highest priority is assuring a safe and secure workplace for all employees.”

Officer Scott Callender was not interviewed during the criminal investigation, and his attorneys have not replied to 12 News’ request for comment.

For tips on this or any other story, contact the 12 News I-Team at iteam@12news.com