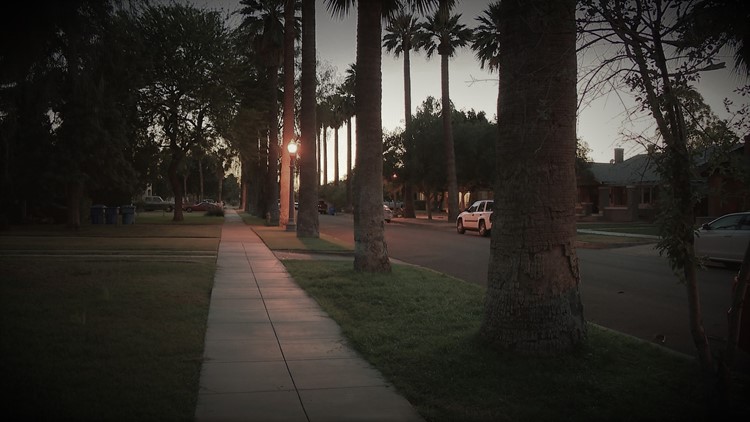 'Reign of Terror' on Willetta Street

Police arrived and arrested a suspect –but wouldn’t locate Joshua for at least 10 minutes. By then, it was too late.

'There's an intruder in my house right now'

“There’s an intruder in my house right now,” she whispered frantically to the 911 call taker. “He’s yelling at my husband.”

911 dispatched officers to the central Phoenix neighborhood. Officers arrived within 30 seconds of dispatch, and immediately located a suspect on the lawn, covered in blood.

But the officers made no contact with the victims.

For more than 10 minutes officers did not enter the home, as Joshua Fitzpatrick died from multiple stab wounds and his wife remained hiding under the bed, waiting for clearance from a 911 call taker.

The 12 News I-Team analyzed dozens of court filings, police reports, video and audio recordings from the night the victim's family now calls a ‘reign of terror.’

In a notice of claim, Fitzpatrick's family accuses Curtis Lamont Bagley, a severely mentally ill homeless man, of murdering Joshua. They also accuse the Phoenix police and the Maricopa County special health care district of negligence, stating police should have acted sooner to find Joshua and the county should have done more to protect the neighborhood from Bagley.

“No inquiries into policy violations were made,” Phoenix police spokesperson, Sgt. Vincent Lewis told 12 News in an email.

“As with any complex tactical scene, there were likely tactical decisions made on scene which would be difficult to discuss in this venue, as well as premature since this case has not yet gone to trial.

“A thorough understanding of the case and proper adjudication would add much needed context and assist with more informed questions,” the email continued.

Phoenix police would not agree to an interview related to this case, but in the body camera, officers can be heard communicating with Bagley, and indicated they ‘knew’ they would see him again.

“I knew he’d (expletive) pop up again,” a responding officer can be heard saying on body camera.

'A danger that could have been prevented'

Phoenix police had multiple contacts with Bagley in the days prior to the arrest. Just nine hours before Bagley was arrested outside the Willetta St. home, police asked Bagley to avoid an area near a school, according to court records. Bagley has also been charged with arson for allegedly lighting a house on fire in the same neighborhood just an hour before he was apprehended.

“My neighbors are screaming and someone is breaking their windows,” one man told a 911 call taker at approximately 1:10 a.m. on March 31. “Yeah, he just lit my neighbor’s house on fire.”

Bagley was charged with first degree murder for the death of Joshua Fitzpatrick and charged with arson of an occupied structure for the events on that night. Bagley has pleaded not guilty to these counts, and in a civil case, attorneys have argued that Bagley does not admit to any crimes that night but is severely mentally ill.

“This is a danger that could have been prevented,” said Holly Gieszl, an attorney representing Curtis Bagley in the civil case.

But these charges are not the first for the 39-year-old Bagley, who has been in and out of the criminal justice system in at least three states dating back to 1989, court records show.

He was convicted of multiple felonies in Colorado from 1989 through 2002, and was convicted in at least two cases in North Carolina. Bagley had only been released from the Arizona Department of Corrections two weeks before his arrest on Willetta Street.

During those 14 days, court records show Bagley had multiple interactions with police and mental health services, though he continued ending up on the streets.

“Curtis (Bagley) begged for a place to stay,” his attorneys wrote in court records. "UPC/ConnectionsAZ nonetheless ‘streeted’ Curtis and sent him away from the clinic to live on the streets with only a bus pass, but no follow-up appointment, no medication, no housing and no food.”

12 News contacted multiple mental health care providers, including the Arizona Health Care Cost Containment System, who said they were not able to comment without a written release of protected health information.

Bagley’s attorneys say there were many opportunities for the mental health system to work with police to prevent Bagley from being on Willetta St. that night.

“Curtis is not an isolated event. This happens every day,” said Josh Mozell, one of Bagley’s attorneys. “Every time something like this happens, they’re rolling the dice.”

It was a gamble that ended tragically the night Katrina Smith stayed under the bed, waiting for police to tell her it was safe to come out.

In a 14-minute recording, Katrina was heard asking the call taker at least three times whether she should come out from under the bed before she was told to go talk to the officers more than 10 minutes after they arrived.

Outside, the officer’s body camera shows they discussed contacting the victims, but continued to stay outside the home.

“Have you contacted the homeowner yet?” one officer is heard asking of another, approximately four minutes after their arrival.

“No, not yet,” another responds.

Inside the house, Katrina is still on the phone with a 911 call taker, still hiding. The call taker informed her that police had a suspect in custody.

“So my husband’s OK?” Katrina asked.

“There’s an officer there, it says they have somebody detained. So I’m trying to find out if they want you to come out, OK?” the call taker responded.

Officers recognized that Bagley himself was covered in blood, and couldn’t identify where the blood was coming from.

“I’m not hurting you buddy, I just don’t want to get your blood all over me,” the officer is heard saying to Bagley on body camera.

The responding officers had information that a struggle had occurred inside the house, but in their written reports, there is no indication why, after identifying blood on the suspect, they did not enter to check on the homeowners.

“She’s saying the husband is in a fight with the intruder,” a dispatcher tells responding officers, according to police radio recordings obtained by the 12 News I-Team. “Thinks the husband wrestled him to the ground. And that’s all we have on this so far.”

Joshua Fitzpatrick died from multiple stab wounds, according to a medical examiner’s report. A knife found outside the house matched several knives from the couple’s kitchen.

But even as officers stayed outside the home as the minutes passed by, Katrina stayed on the phone as she left the bedroom and can be heard in the 911 recording screaming as she finds her husband dying on the floor.

Now, Fitzpatrick's family has served a notice of claim against the police and county health departments, in hopes no other family has to live a night like this again.

For tips on this story or any others, email iteam@12news.com.