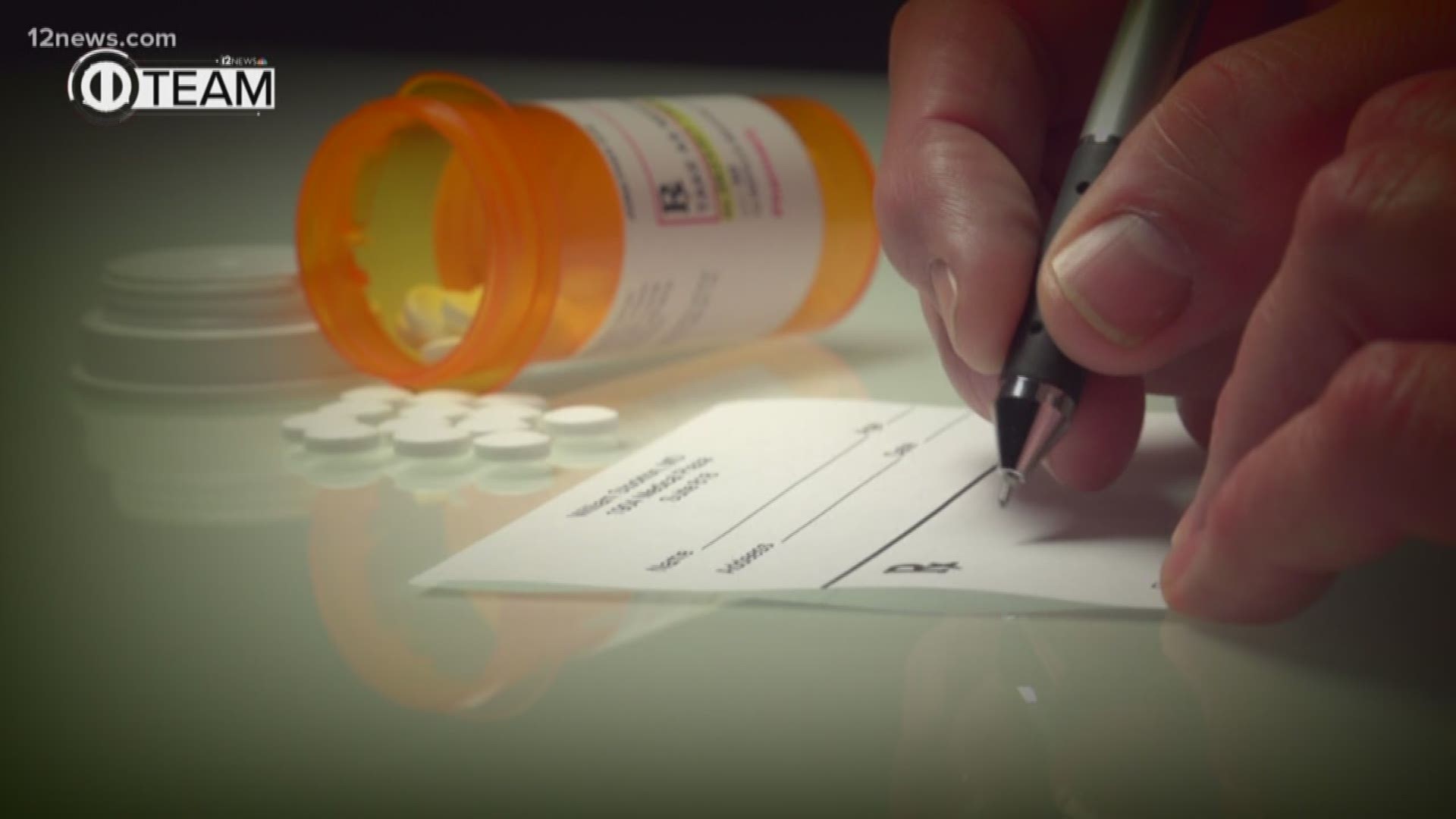 SCOTTSDALE, Ariz. — “I felt betrayed," said a doctor who wants to remain anonymous.

For a doctor, it's the ultimate betrayal.

“You want the trust in that person taking care of your sick loved one," said the doctor.

His nurse is accused of stealing his prescription pad and using it to write fraudulent prescriptions for Tramadol. Tramadol is an opioid and according to data from the DEA, it is abused by more than a million Americans.

“I had no idea what Tramadol was because we don’t use it in my practice," the doctor said.

This doctor likely would have never found out, but in August of 2016, he typed his name into Arizona's new prescription drug monitoring database.

“Which is when I found 102 different prescriptions written under three names for a former nurse that worked with me," the doctor said.

One hundred two prescriptions and more than 15,000 Tramadol pills. Each prescription allowed for six refills. That is higher than the maximum of five allowed by the DEA.

“Never once did a pharmacy call me verifying why was I writing a prescription for something out of my scope of practice," said the doctor.

Right away, the doctor contacted hospital officials and the Scottsdale Police Department.

“My major concern was that she had worked at all three of the big major hospital systems in the Valley in intensive care settings for children and adults," the doctor said.

As Scottsdale PD launched its investigation, the Arizona State Board of Nursing's investigation was already underway. According to documents, this nurse had two prior complaints filed against her. One was for administering controlled medications to her patients more often than other nurses. Another was for removing higher volumes of fentanyl.

“How do you let someone practice like this taking care of sick vulnerable patients in hospitals?" the doctor said.

According to the nursing documents, she admitted she was addicted to Tramadol. Rather than suspending her license, she was allowed to keep working while enrolled in a rehabilitation program called CANDO.

But the hospital she was working at was never notified. They only found out after she tested positive for fentanyl.

“Why isn’t the nursing board communicating with other hospitals in the Valley to let them know this is going on when something happens?” said the doctor.

12 News asked the nursing board that same question. The system is not set up for the board to alert hospitals or employers. It is up to the nurse to notify employers themselves. This nurse never did.

She worked for two months before board officials found out. She was then removed from practice.

In a statement, the executive director for the nursing board said, “While it is unfortunately that, in this example, the nurse violated her CANDO agreement by working without notifying the Board or her employer, it is important to note that this an exception to most nurse's practice, and that to our knowledge, no patients were harmed. Many nurses have come to the Board and shared their success stories with Board staff and the Board, explaining that the Board's rehabilitation programs literally saved their lives, and that they are now in good recovery with their illness, and helping patients.”

You can read the Arizona State Board of Nursing's full statement here.

In the meantime, Scottsdale PD continued to build their criminal case. According to search warrant documents, investigators were concerned by the sheer number of pills the nurse fraudulently prescribed, saying she might be selling them.

“When I spoke to the DEA, they told me other than oxy it was the second most diverted drug on the street in Arizona with a street value anywhere from a dollar to $15 a tablet," said the doctor.

After searching the nurse's home and recovering several vials for fentanyl and morphine, the nurse was arrested. In 2017, police recommended she be charged with a number of felonies, including forgery, identity theft, and obtaining prescription drugs illegally.

”Up until this time nothing has happened with it," said the doctor.

That idea is hard to fathom for this doctor.

“You trust that that bedside nurse taking care of your sick loved one is competent, compassionate and is doing the right thing," said the doctor.

12 News is not identifying the nurse because she has not been charged. If she is charged then convicted, her nursing license will be suspended because felons cannot hold a license. If she serves any kind of sentence, she will be able to reapply for her license three years after that sentence is finished.