Officers seeking workers' compensation to cover PTSD sometimes undergo an independent exam -- but many question whether the exam is truly independent. 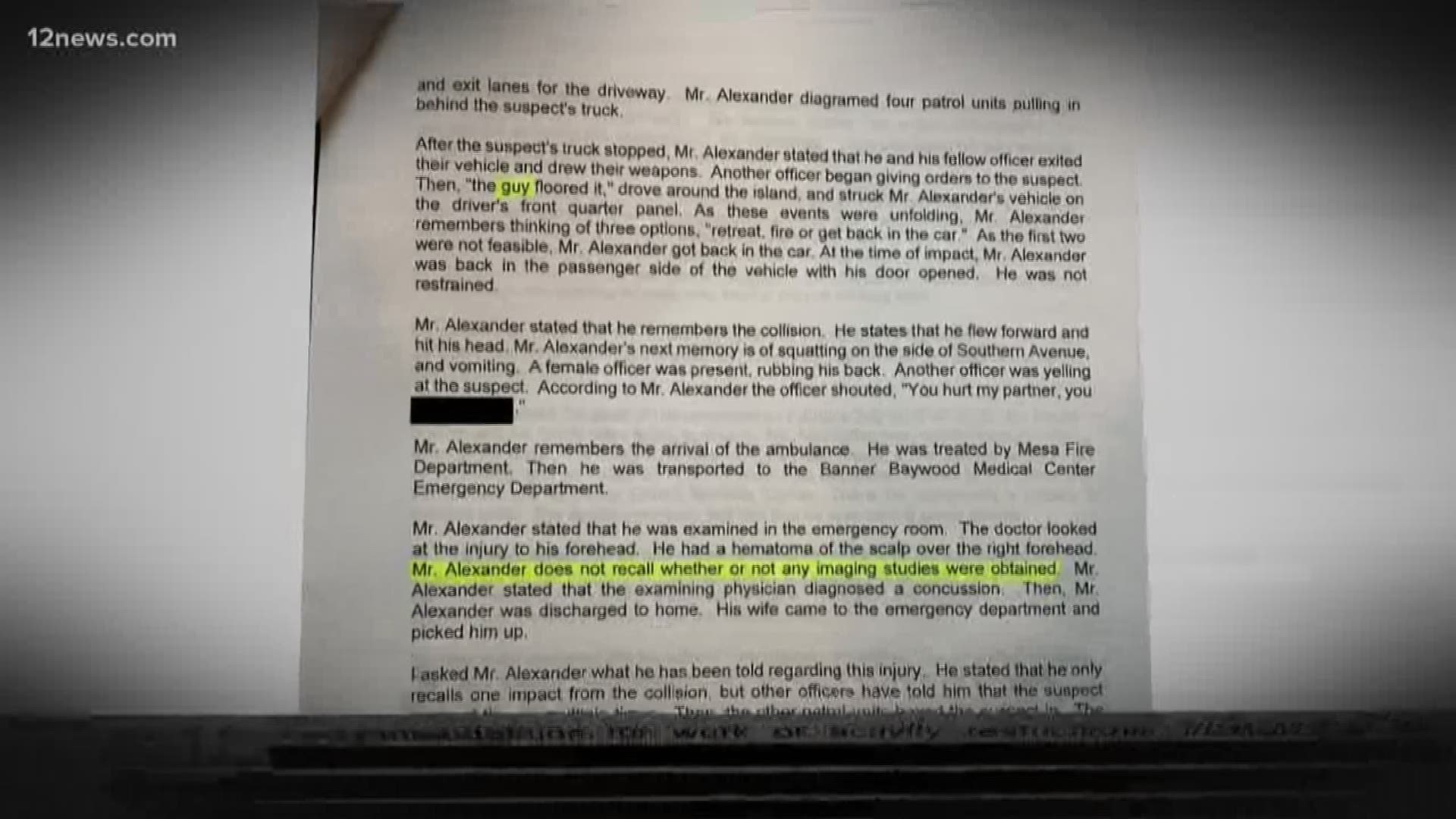 In 2019, at least 228 police officers died by suicide, according to Blue H.E.L.P., a non-profit geared at suicide prevention in law enforcement.

That’s the highest number ever reported.

It means ensuring police officers get adequate mental health care is more important than ever.

After fighting for our country, Alexander took on a new career: Fighting crime with the Mesa Police Department.

“It was exciting,” Alexander said.

But in 2014, the excitement turned to terror. A suspect in a stolen vehicle crashed into Alexander and tried to run him over.

“She had a grip on the steering wheel with the intent to run me over,” Alexander said. “It took me three years to even be able to work through that story.”

That led to yet another fight, one with his own mental health.

“Between primary care visits, medications, I was doing weekly visits with a psychologist," he said. "It adds up quick.”

Alexander applied for workers’ compensation to help pay for his treatment. But he quickly learned his internal battle would not compare to the battle with his own city.

“It is the most difficult challenge I’ve ever been through in my entire life,” Alexander said.

The City of Mesa denied Alexander’s claim. He appealed the decision and is now representing himself before the Arizona Industrial Commission.

Despite his previous diagnoses, he worried his appeal would boil down to one thing: An independent medical exam.

“It’s out of control,” Alexander said.

Alexander’s exam was completed by Dr. James Youngjohn. According to records reviewed by 12 News, Youngjohn concluded that after the 2014 incident, Alexander did not need any “active or supportive mental health treatment.”

Youngjohn was commissioned by the City of Mesa to perform the independent exam, which makes the examination different than seeing a psychologist for treatment.

In Youngjohn’s summary, he wrote, in part: “Prior to the evaluation, Mr. Alexander signed a form acknowledging his understanding that I am an independent doctor, that this examination was intended for evaluation purposes only, the traditional doctor/patient relationship did not apply to this examination, and that I would not provide him with a copy of the report.”

Youngjohn has worked as an independent medical examiner before, including for other officers and in death penalty cases.

The 12 News I-Team examined eight cases involving Youngjohn that came before the Arizona Court of Appeals and one lawsuit filed against Youngjohn.

12 News was not able to review all of Youngjohn’s cases due to confidentiality rules in the industrial commission and board of psychologist examiners. Youngjohn refused to comment on his cases, stating only that he is “objective and evidence based.”

Youngjohn is not the only psychologist conducting independent medical exams, and many officers have said their own experiences undergoing similar exams are one of the greatest challenges they face when seeking benefits for PTSD.

The 12 News I-Team examined appeals court records, data from the City of Phoenix and interviewed multiple police officers to better understand the challenges they face.

In Phoenix, 29 officers applied for benefits to cover PTSD between 2013 and 2018. According to Phoenix data, 14 of those officers were approved for benefits, 12 were denied. Three cases were still pending.

The industrial commission would not provide similar data for the state. 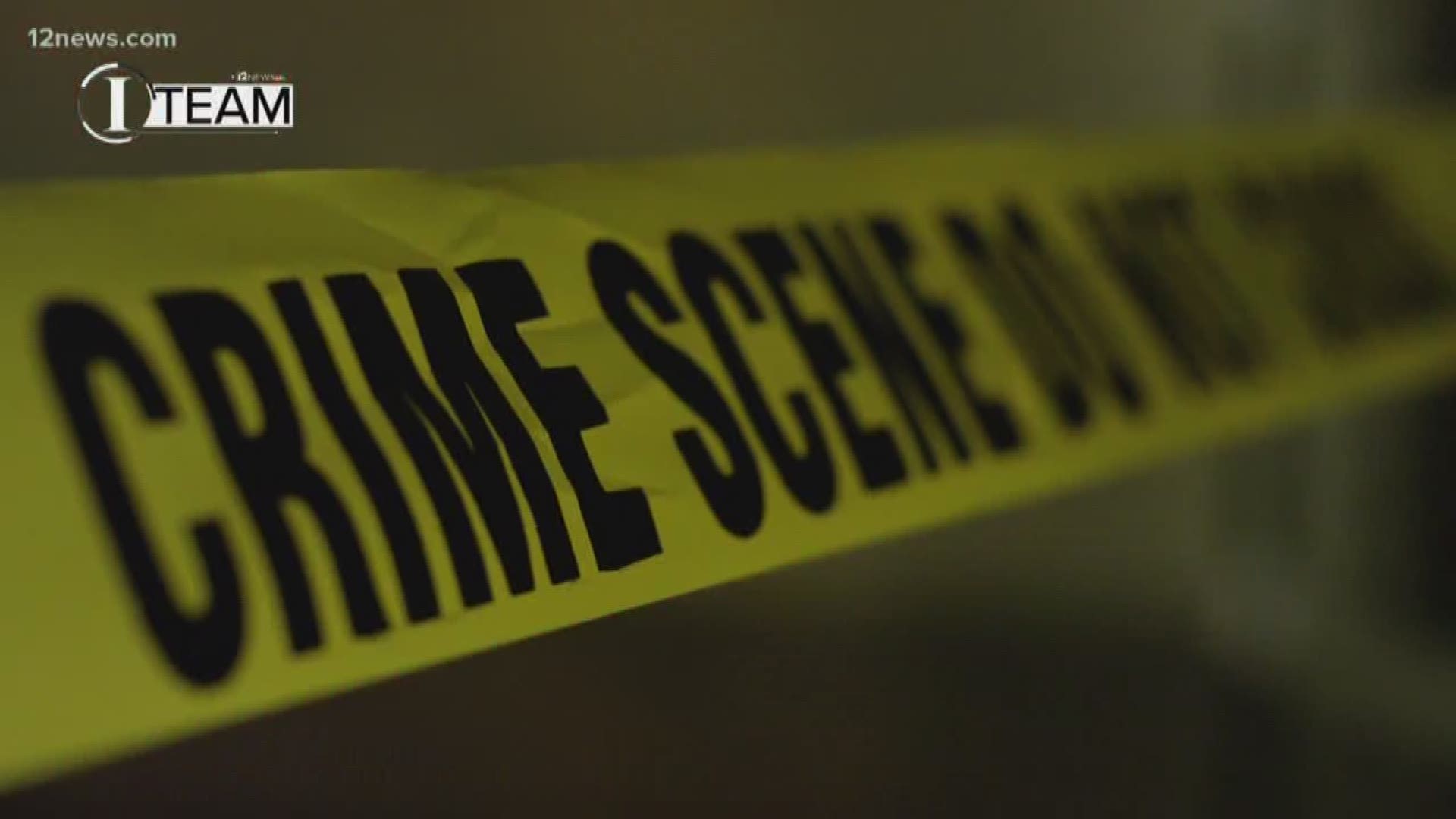 “The people that are hiring (independent examiners) are aware of the fact that they are finding people who support their views,” attorney Larry Cohen said.

Cohen has worked on cases like Alexander's for decades as an attorney specializing in emotional damage cases. He said the independent medical exam isn’t always independent.

“What we’d like to have happen is a truly independent view,” Cohen said. “I mean that would be ideal. But the system has become so adversarial, so entrenched, so engrained on both sides, the independence is gone.”

Officers are also allowed to have their own experts if they can afford one. But some, including Alexander, don’t have a lawyer and are unable to afford an expert witness.

“The system only works when each side is relatively equally positioned to present their view. When you deviate from that then the side with more money, more resources, greater opportunity, is going to do better,” Cohen said.

Who is responsible for making sure the independent system works fairly?

According to its website, the industrial commission is responsible for administering and enforcing state laws relating to the protection of life, health, safety and welfare of Arizona’s employees. They denied 12 News’ request for an on-camera interview so we went to their meeting.

“Do you as the industrial commission have a responsibility to ensure that these independent medical exams are in fact independent?” 12 News reporter Bianca Buono asked.

“In terms of the independent medical examinations and how those are conducted, and how the physician members are selected, this is not something that is routinely reviewed at this level,” chairman Dale Schultz said.

In an email, the spokesman for the commission Trevor Laky added, “As with any other court system, parties put forth their evidence and our impartial judges weigh that evidence.”

“It is the duty of the opposing parties to point out – and try to prove – if they believe the other side has presented biased or impartial information or evidence,” Laky said in an email.

“The ICA does not regulate who may perform IMEs and does not participate in the process of selecting IMEs,” the email stated.

The Arizona Board of Psychologist Examiners also denied 12 News’ request for an on-camera interview so we went to their public meeting.

“At this point, it appears that no one is regulating this. So as the board in charge of psychologists, wouldn’t that be your guys’ responsibility?” Buono asked.

“We appreciate the comments. It’s something we would like to speak about, discuss at a later meeting and put it on the agenda,” chair Tamara Shreeve said.

In an email, Heidi Herbst Paakkonen, the board executive director said, “the Board's statutes are silent with respect to independent medical examinations.”

“If the Board receives a complaint against a psychologist concerning such examinations, it will evaluate the complaint allegations, facts, and circumstances to ascertain whether the psychologist committed an act of unprofessional conduct as defined by A.R.S. 32-2061(16),” the email continued.

RELATED: Family of Flagstaff police officer who died by suicide speaks out for the first time

The board of psychologist examiners has investigated complaints made against psychologists in the past. In one such case, at least three police officers complained that the examiner was biased against them, and the board placed that doctor on probation.

12 News also tried to reach Dr. James Youngjohn via telephone and email for comment. When we contacted him in person at his Scottsdale office, Dr. Youngjohn said, “I can’t talk about any individual cases.”

“Can you speak to the independent medical exams in general that you do?” Buono asked.

“They’re objective. They’re evidence based,” Youngjohn said. “So I am just not going to speak with you.”

Despite multiple experts and officers raising concerns about the exams, Alexander feels he’s still left to fight his case for himself.

It’s a fight he is refusing to lose.

“I see that something is wrong and I want to make it right,” Alexander said.

Throughout 12 News’ reporting of this story, Alexander’s uphill battle got steeper.

Following 12 News’ encounter with Youngjohn, the City of Mesa’s attorney, Todd Lundmark, wrote a letter to the industrial commission accusing Alexander and 12 News of witness tampering.

12 News reached out to the City of Mesa for comment following that letter. A spokesperson declined our request.