MCSO said it arrested three people accused of sending meth and Suboxone through the mail disguised in legal paperwork. 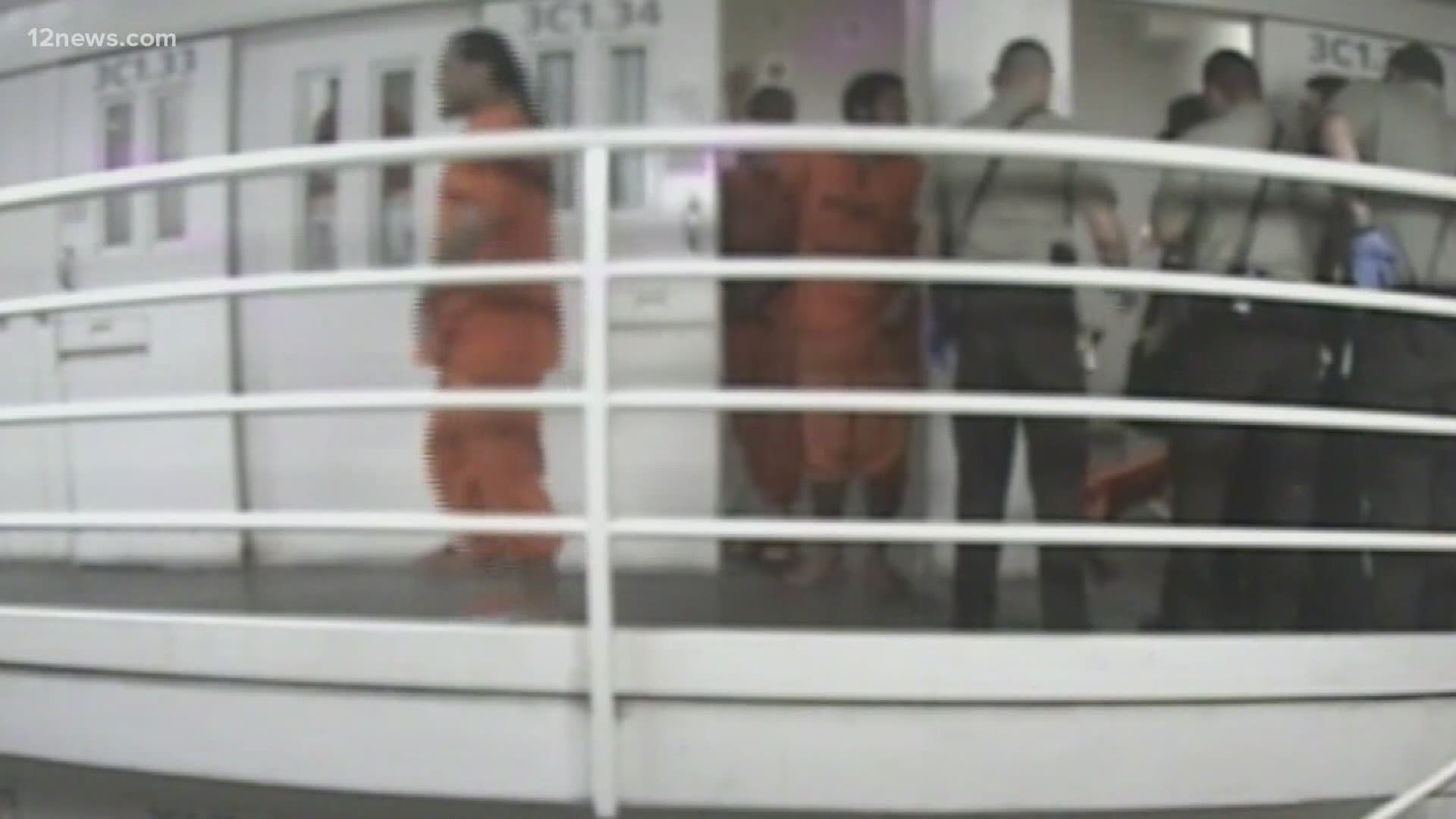 PHOENIX — Surveillance video from the Maricopa County Fourth Avenue Jail shows an inmate’s sudden death while on lockdown, including three tense minutes where inmates wait for jail officials to unlock the cell where the victim lay unconscious.

Nicolaus Hernandez, 32, was later declared dead at the hospital.

Hernandez, a father of three from Casa Grande, was in the county’s high-security jail awaiting trial on domestic violence charges related to aggravated assault, armed robbery and kidnapping.

Hernandez’s family questions why it appeared jail officials didn’t notice Hernandez in distress during a mandated security walk, and why it took several minutes for Hernandez to receive medical attention.

“It’s just hard because I wasn’t able to see him or hold him. I just got a call that he was in the morgue,” said Martina Hernandez, Nicolaus’ mother.

Jail surveillance video on the day Hernandez died showed nothing out of the ordinary. Hernandez could be seen socializing with inmates, walking in and out of three different cells and talking on the phone.

According to the MCSO investigative report by MCSO Detective J.S. Dunst, Hernandez had several phone conversations with his girlfriend that evening and was upset. Hernandez had slurred speech and showed signs of intoxication, according to Dunst, who reviewed recordings of the calls.  The following timeline details what happened next:

- At 9:15 p.m., Nicolaus was reprimanded for loitering on the jail’s upper floor. He’s placed on lockdown, entering his cell, the door closing behind him.

- Between 9:16 and 9:21, Hernandez is seen standing at the cell window. An inmate walking by appears to communicate with him, motioning for him to go to sleep.

- At 9:21, Hernandez sidesteps out of view of the window.

According to the video, it’s not clear how deliberately officers looked inside Hernandez’s cell. In other security walks, officers can be seen stopping and looking more directly into a cell window, before moving onto the next cell.

“They didn’t even bother to look into his cell. They just walked right by and he was already down on the ground,” Martina Hernandez, Nicolaus’ mother said.

- Between 9:22 and 9:23, A dark image is seen moving on the lower portion of the cell window. An enhanced version of the video suggests it might be Hernandez’s hand pressed up against the cell window. The image drops out of view completely.

- At 9:23, An inmate walks by the cell and peers through the window. Hernandez is lying on the ground and his face is turning blue, according to the inmate. The inmate runs downstairs and activates an emergency intercom, according to the investigation.

- Between 9:23 and 9:27, Several inmates are knocking on the door and appearing frantic while they wait for the cell door to unlock.

- At 9:27, the cell door opens. Three inmates walk into the cell first, appearing to tend to Hernandez. Officers arrive 20 seconds later with an Automated External Defibrillator (AED). Officers administered chest compressions and breaths, according to the investigation. Video does not show medical treatment as the doorway is blocked by several officers.

-At 9:29, Employees from Maricopa County Correctional Health Services arrive and administer an oxygen tank to Hernandez. According to the investigation, Hernandez did not show signs of a pulse.

-At 9:39, City of Phoenix firefighters arrive and work on Hernandez with more chest compressions before carrying him away on a backboard and transporting him to the hospital.

Ethanol and fentanyl in his system

MCSO’s investigation concluded, “Upon complete and thorough investigation…there was no criminal malfeasance perpetrated upon Nicolaus…his death was a tragic result of his ingestion of ethanol and fentanyl…”

Interviews with inmates suggested someone claimed they knew Nicolaus took fentanyl. But where he got it and from who is not clear.

“Who gave him pills? Where did he get pills from? We don’t know,” Martina Hernandez said. She added she was aware Nicolaus took painkillers one other time in his life, but she did not believe he would have purposely taken fentanyl while in jail.

One inmate told investigators he was aware of Hernandez taking the fentanyl but he would not say where he got the drug.

“If I did know I wouldn’t be able to tell you guys anyway,” the inmate told the detective.

“Hooch is considered in the eyes of the CA (Corrections Association) an administrative infraction, therefore, it is not pursued as a criminal matter,” Enriquez said in an email to 12 News.

Though the investigation did not identify where Hernandez obtained fentanyl, investigators are conducting “several ongoing investigations” related to the drug, Enriquez said.

While awaiting trial, Hernandez had pleaded not guilty and was anxious to have his day in court, his parents said. He had been in jail for five months.

As a teenager, Hernandez was diagnosed with schizophrenia and spent many years on prescription medication, his mother said. At the time of the alleged crimes, Hernandez was not believed to be taking medication.

“He had a soft heart and was very giving,” said Martina Hernandez.

An attorney for Nicolaus’ family says they are reviewing their legal options.

• Is Arizona ready to reopen?