Patrick Frazee is on trial for the murder of his fiancee, Woodland Park mom Kelsey Berreth. His mistress, Krystal Lee, testified against him. 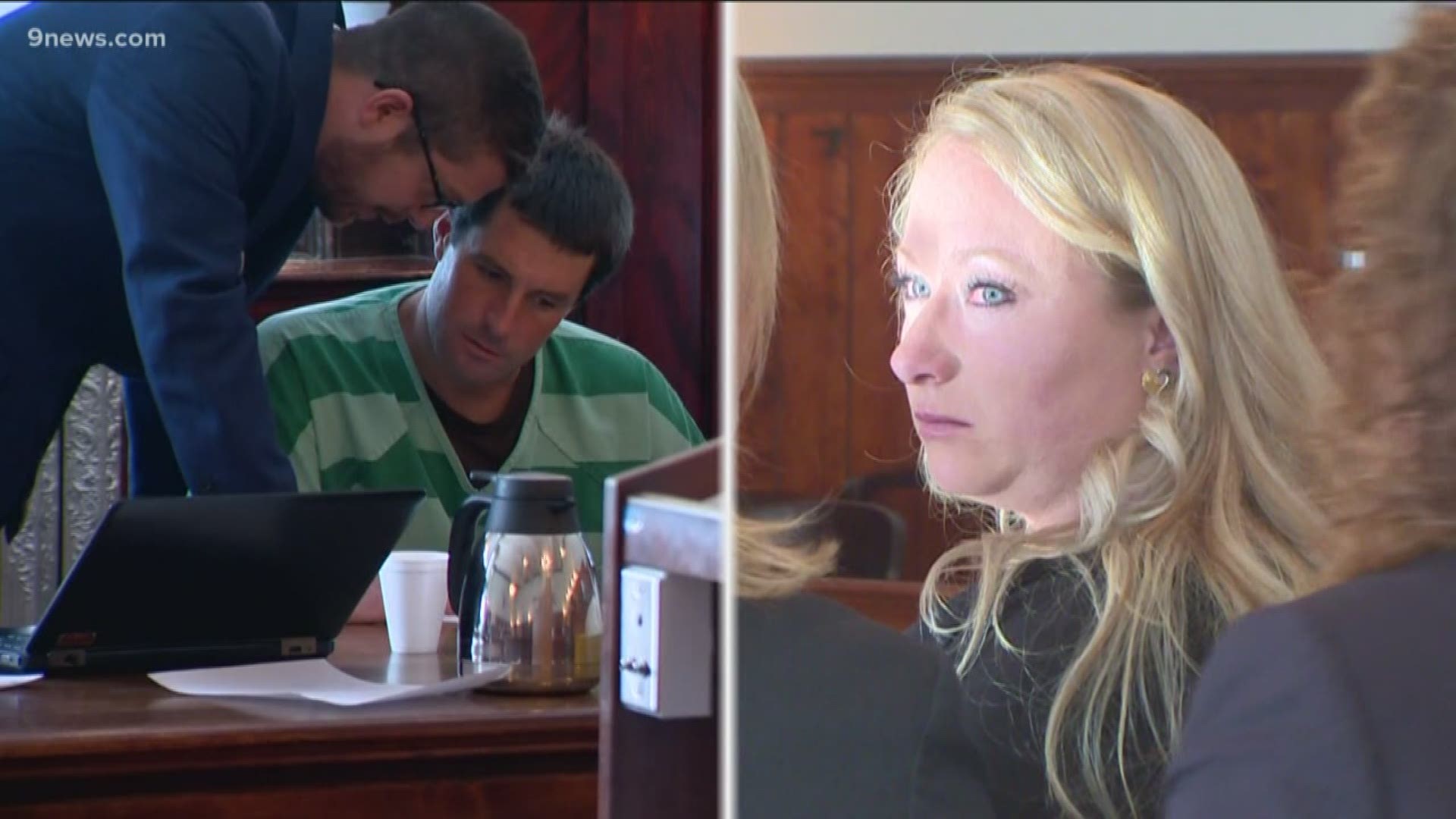 Patrick Frazee is charged with first-degree murder, solicitation to commit first-degree murder, and tampering with a deceased human body. Much of the evidence against him relies on the information provided to police by Krystal Lee, a nurse from Idaho was on the witness stand for the better part of two days during Frazee’s murder trial.

Lee, who 9NEWS has previously referred to as Krystal Lee Kenney, claims that she had dated Frazee on and off since 2006, and that in 2018, he had asked her to kill Berreth on three occasions. Lee said she didn’t go through with it, but that on Nov. 22, 2018 — the last Berreth was seen alive — Frazee did. That’s when Lee said she drove to Colorado from Idaho and helped clean up the crime scene inside Berreth’s Woodland Park apartment, and watched Frazee burn her body on his property.

Lee has pleaded guilty to tampering with evidence for destroying Berreth’s cellphone. As part of a plea agreement with the Fourth Judicial District Attorney’s Office, Lee had to cooperate with investigators and testify against Frazee.

During a nearly two-hour-long cross-examination, Public Defender Adam Steigerwald questioned Lee about the plea deal, which he said could allow her to skip prison entirely.

Lee answered “no” to all of these questions. The day before, she testified that she did in fact come to Colorado after Frazee told her she had a “mess to clean up,” and that she sent messages to Frazee from Berreth’s phone in what she said was an effort to deter law enforcement. Lee said after driving back to Idaho — a 750-mile trip — she burned Berreth’s purse and cellphone.

And even in September 2018, the first time Frazee had asked her to kill Berreth, Lee admitted that she never called law enforcement. In this case, Lee said Frazee told her to go to Berreth’s condo with a Starbucks coffee

“You weren’t charged with driving from Idaho to Colorado and buying a cup of coffee after Mr. Frazee told you to poison the coffee?” Steigerwald said, adding this could carry a decades-long sentence.

Lee admitted she wasn’t, but with one caveat.

“I didn’t put anything in the coffee,” Lee said.

During her testimony, Lee said she had gone to Berreth’s condo with the coffee to see what she was like as a person. Lee admitted to making up a fake name and giving her a burner phone number during the interaction. Later, Lee said she texted Berreth with this number and asked her to coffee.

During cross-examination about the coffee incident, Steigerwald asked Lee something he would ask her multiple times.

Lee admitted she did not. During redirect examination with Prosecutor Jennifer Viehman, she offered an explanation for why she never called police.

“I didn’t think anybody would believe me, and it would be his word against mine,” Lee said. “I had already been there. I didn’t know if he had video of me, I didn’t know what to do.”

The second time Lee said Frazee told her to murder Berreth was Oct. 15, 2018. She said he gave her a metal pipe and told her to go to Berreth’s apartment. Once again, Lee said she didn’t go through with it, and said she went to a gas station parking lot near Frazee’s home.

Lee agreed. She also agreed that after her nap, she went to Frazee’s home and helped him with housework and taking care of his and Berreth’s daughter.

She also admitted to coming to Colorado a week later with a baseball bat. During her testimony, she said Frazee had told her she needed to “swing away.”

“You were not coming for any kind of softball tournament?” Steigerwald asked.

Lee said she had not.

“You drove 750 miles with a baseball bat?” Steigerwald asked. “There are no baseball bats in Teller County?”

Finally, Steigerwald asked Lee if the purpose of bringing the baseball bat was to kill Kelsey Berreth.

“It was at Patrick’s request,” Lee said.

During her testimony, Lee said she thought that conversation was normal — and maybe an indication that Frazee had given up his plan to kill his one-time fiancee and the mother of his child.

“You have a 10-minute conversation with Patrick Frazee and think ‘back to old times?’” Steigerwald asked.

The next day — Nov. 22 — she said Frazee called her and told her she had a “mess to clean up.” After getting a shift covered at the hospital and loaded her car with cleaning supplies, Lee said she drove to Colorado. During her testimony, Lee said before she embarked on the 12-hour drive, she didn’t believe Frazee had truly committed the murder.

“Maybe this is just another hoop to jump through for Patrick, to show your loyalty?” Steigerwald asked. “This is why you didn’t call police, you didn’t call [her ex-husband], you don’t tell your friends and family.”

Lee admitted this was true.

After leaving Frazee’s ranch in Florissant and watching him burn a tote that contained Berreth’s body, Lee said she returned to Colorado. She said she first heard from the FBI while she was in Las Vegas with her family on Dec. 14. Lee claimed she had left blood behind for law enforcement while she was cleaning Berreth’s condo in hopes law enforcement would find it. She also claimed that she intentionally let Berreth’s phone ping in Grand Junction, in hopes it would provide a clue.

Lee admitted she didn’t say any of this on the phone with the FBI.

“But you claim you left clues hoping they’d figure out the truth, that’s what you’re telling us?” Steigerwald asked.

“By the time you tell everybody … by the time you do that … you’ve got this letter and plea deal from the district attorney,” Steigerwald said.

Lee said that was true.

During redirect examination with Viehman, Lee conceded she was afraid of Frazee, and explained why she didn’t tell her family, friends or police about what had happened.

Viehman also mentioned another part of the plea deal.

“When you entered into the agreement, the No. 1 thing in that agreement was to tell the truth … to tell the truth to law enforcement, to provide a full and complete statement of what happened to Kelsey Berreth,” Viehman said. “Did you do that?”

The rest of the testimony

Before cross-examination, Lee showed photos of the ranch where she said Frazee stored Berreth’s body in a black tote box after the murder. She also claimed that after burning her body, Frazee said he had two ranch hands help him load up the ashes.

Lee said he was either going to take them to the dump or to the river.

Those two ranch hands testified after Lee. One of them, Kyle Richie, said he helped Frazee move on a rusted-out horse trough on his property the weekend of Thanksgiving, clean up ashes, and then cover a burned area with dirt.

Prosecutors showed a photo that depicted a part of the ground at the Frazee ranch that appeared to have burn marks.

During cross-examination, Richie conceded that Frazee burned trash on the property all the time, and he didn’t find anything odd about this particular instance.

Lee testified that Sheila Frazee — Patrick Frazee’s mother — had been on the property’s patio during the fire. The two ranch hands said the patio was visible from where they had moved the trough.

Thursday marked day five of Frazee's trial, which began on Friday and is expected to last for three weeks. 9NEWS is in the Teller County Courthouse and will provide updates on 9NEWS and 9NEWS.com at breaks. Live reporting is not permitted due to a standing decorum order, and updates can only be provided outside of the courtroom.