An ethics complaint filed against the high-profile prosecutor in the Jodi Arias case alleges he engaged in misconduct that may have compromised her trial, 12 News has learned. 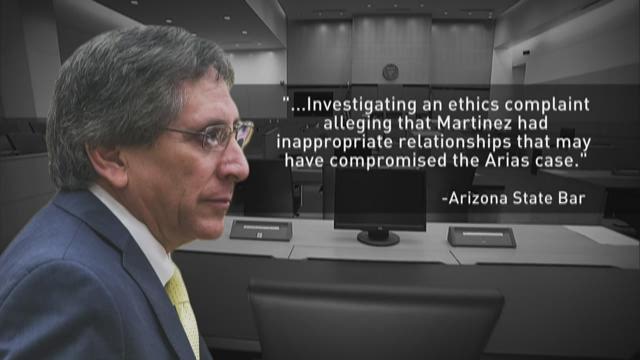 Tonight at 10, a 12 News exclusive -- an ethics complaint filed against the high-profile prosecutor in the Jodi Arias case -- alleging misconduct during her trial.

An ethics complaint filed against the high-profile prosecutor in the Jodi Arias case alleges he engaged in misconduct that may have compromised her trial, 12 News has learned.

The complaint was filed with the State Bar of Arizona on behalf of Arias herself, now serving a life sentence for the brutal murder of her ex-boyfriend.

At the center of the accusation of misconduct against Deputy Maricopa County Attorney Juan Martinez is an alleged relationship with a woman who was blogging and providing TV commentary on the Arias case, according to a police report obtained by 12 News.

The woman, Jen Wood, was one of the two self-named "Trial Divas," who dished about the Arias case on TV and online.

A State Bar of Arizona spokesman confirmed to 12 News it is "investigating an ethics complaint alleging that Martinez had inappropriate relationships that may have compromised the Arias case."

Tammy Rose, a free-lance reporter who covered the Arias trial, filed a sworn statement with the ethics complaint.

Rose said she and Wood became friends while they were covering the trial's death-penalty phase in 2015.

They would car pool to the Maricopa County Courthouse and trade text messages through the day.

"She told me this shocking secret that I was – so shocked when she told me – that she said she was having an affair with Juan Martinez," Rose said in an interview from her Wisconsin home.

After the ethics complaint was filed, Rose told a sheriff's officer at her Wisconsin home that she had been harassed via text message and phone calls, according to a report filed by the Sheboygan County, Wis., Sheriff's Department.

Rose told the officer about the allegation that Wood had an affair with Martinez, according to the report. But Rose said she didn't know who was responsible for the text messages and calls.

Martinez is a deputy Maricopa County attorney now involved in another high-profile case - the trial of the accused serial street shooter.

"Mr. Martinez prosecuted Jodi Arias in compliance with lawyers' rules of professional conduct. The Arias allegations consist of rumor and innuendo spread by a convicted murderer trying to seek revenge against the public servant who put her behind bars for the rest of her natural life. They do not warrant any attention at all."

Martinez is currently appealing an Arizona Supreme Court discipline committee's finding that he engaged in unprofessional conduct as a prosecutor in several other cases.

Both Wood and a second woman denied participating in any of the alleged misconduct by Martinez, according to the Bar letter. 12 News is not identifying the other woman because details of the allegation involving her could not be independently confirmed.

Wood did not respond to numerous requests for comment by 12 News.

The Bar complaint against Martinez was filed on Arias' behalf by attorney Karen Clark, a former ethics counsel at the State Bar.

A letter to Tammy Rose from the State Bar says the ethics complaint "involves communication between Mr. Martinez and a Ms. Wood."

But if Martinez shared non-public trial information with a blogger and commentator like Wood, ethics experts say, that could be a problem.

"Attorneys in those kind of proceedings have to be especially careful to mind their ethical obligations," said Keith Swisher, professor of legal ethics at the University of Arizona.

"They can't (share information) themselves and, importantly, they can't do it through a third party, including people with whom they're associated romantically or otherwise."

Concerns about Wood's contacts with Martinez during the Arias trial led to the breakup of the Trial Divas, according to Wood's former business partner, Sharee Ruiz.

The State Bar is continuing to investigate the Arias ethics complaint.