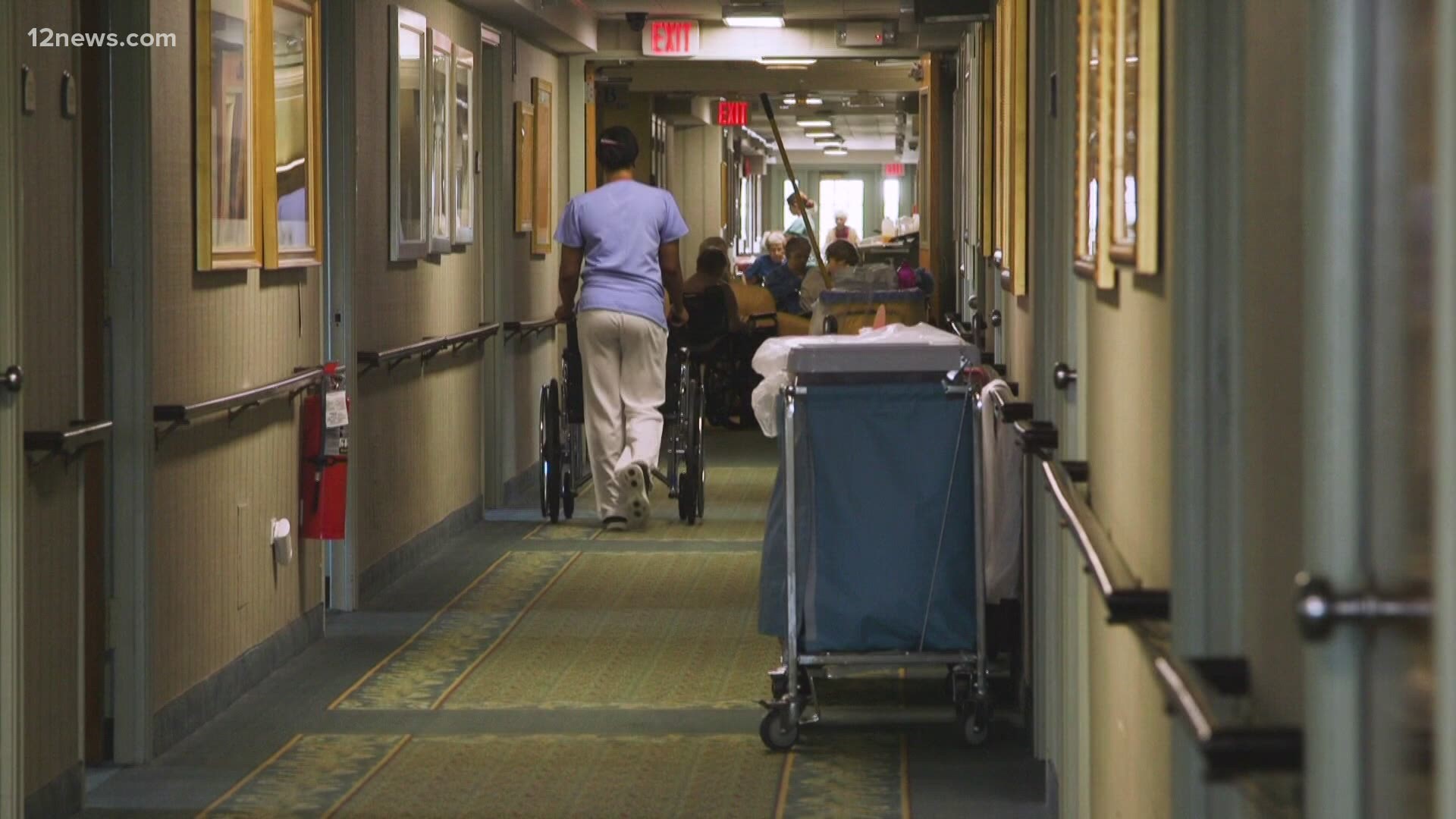 PHOENIX — Dozens of Arizona nursing facilities that were cited by the state during the pandemic for COVID-19 violations went on to receive bonus money from the federal government that far exceeded the penalties.

The "quality incentive" bonus payments were part of the Provider Relief Fund and were given out to facilities across the country September through December. The money was set aside by Congress as part of the CARES Act and was given to facilities as a reward for having low COVID-19 infection rates and mortality rates.

But Brian Lee, executive director of Families For Better Care, said when distributing the money, Health and Human Services assessed nursing facilities on a month-by-month basis and failed to look back at prior outbreaks or citations.

“If you have this pot of bonus payments that’s just being handed over to the facilities, that negates that enforcement process," Lee said.

One example is Granite Creek, a skilled nursing facility in Prescott that had one of the most egregious coronavirus outbreaks and violations in the state.

Current and former employees of the facility blew the whistle to the 12 News I-Team last year.

“I’ve been crying every other day because residents that I have taken care of for over five years are now dead," one employee said.

“Once that one person that very first person came up positive, it just went like a wildfire," another employee said.

State and federal investigators moved in on the facility and found a number of problems including a lack of personal protective equipment and that the facility allowed COVID-positive employees to come to work and treat both sick and healthy residents.

An investigation by the Arizona Republic revealed Larry Michael Rasmussen, the administrator running Granite Creek, was a convicted felon.

The case at Granite Creek was so disturbing it prompted Governor Doug Ducey to strip the Board of Examiners of Nursing Care Institution Administrators and Assisted Living Facility Managers of all licensing and regulatory responsibilities.

According to Arizona's Department of Health Services, the state fined Granite Creek $500.

A spokesperson for ADHS released the following statement to 12 News regarding the citation:

"ADHS is following Arizona state law, which sets a limit on civil money penalties at $500 per violation per day. However, ADHS penalties can and do lead to further enhanced enforcement by the U.S. Centers for Medicare and Medicaid Services, which contracts with ADHS to inspect long-term care facilities and has much greater ability under federal law to impose monetary penalties."

“A $500 fine is pennies on the dollar for the nursing home. It’s almost negligible and really it’s laughable," Lee said.

Following Granite Creek's outbreak, the $500 fine was offset in a big way. The facility was given federal bonus payments in September, October, November and December totaling $187,969.

Granite Creek is not alone

The I-Team analyzed those payments and found that of the facilities that were fined, only one had a citation that cost more than the bonus.

“I think Arizona needs to do a course correction on enforcement because penalties are just not strong enough," Lee said.

“We were standing there saying keep COVID out and yet we weren’t given the tools to keep it out. We were left behind," Voepel said.

Voepel said there was confusion around the quality incentive bonus payments. He said some facilities that avoided large coronavirus outbreaks received significantly less money or none at all compared to other facilities that experienced a higher number of cases and deaths.

"What’s the rhyme or reason for it? If you’re gonna do something like this, let’s make it really work," Voepel said.

Lee believes the pandemic exposed a number of problems within nursing facilities, though, and thinks the first step to solving them is transparency and informing the public of the money facilities received.

“This whole pandemic has been one giant stimulus check for nursing homes," Lee said. "Consumers don’t know about this. That’s the disconnect.”

12 News reached out to Granite Creek for comment for this story but did not hear back.