"The problem he has in this case and that DCS has in this case is that all of the information needed to make a good decision about placing the child was available and they just didn't act on it," said Robert Pastor, the attorney representing the foster child who was molested. 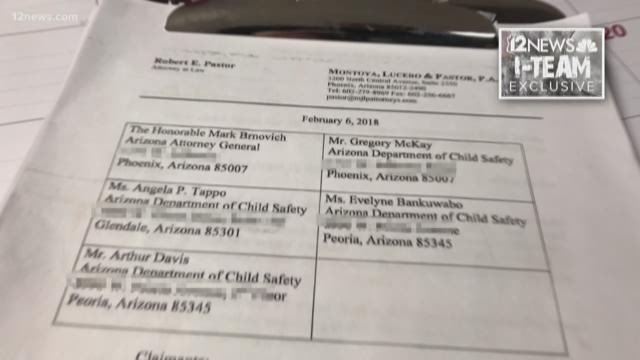 PHOENIX - The state is finally responding to a 12 News I-Team investigation revealing allegations that the Department of Child Safety placed a foster child in a home with a registered sex offender.

"The first thing I want people to know is I take this very seriously," said Governor Doug Ducey. His spokesperson ignored a 12 News request for comment, but we caught up with him at a public event.

12 News obtained a damning notice of claim alleging DCS failed to protect a six-year-old foster child. The document says the young girl was placed in a home where registered sex offender Jose Egurrola was living. Egurrola then brutally molested her. He was sentenced to prison.

Foster child placed in a home with a sex offender, document says

"Any child that enters a home in foster care, the people inside that home have background checks," Ducey said.

The governor's comments come after an exchange between 12 News and a DCS employee named in the notice of claim. She told 12 News DCS does not check the sex offender database before placing a child in foster care.

"Nothing slipped through the cracks here, OK? Every child that is put into a home, the people inside that home have a background check," Ducey said.

The DCS spokesman ignored or denied 12 News' multiple requests for an interview with Director Greg McKay. McKay appeared on KTAR with Mac and Gaydos, where he was asked about the 12 News I-Team report. He said he couldn't comment on pending litigation so instead he used a hypothetical scenario.

"If you allow somebody to spend one night in your house, couch surfing perhaps, and you don't call and report that to DCS that somebody is staying in the home tonight, we have no idea who is there," McKay said during an interview with Mac and Gaydos on KTAR.

However, attorney Robert Pastor, representing the foster child who was molested, says that is not what happened in this case.

"We know that DCS or the state of Arizona knew. This man registered with the sex offender registration system. He also has his Arizona motor vehicle driver's license that was clearly on file. It doesn't take a rocket scientist to find out where he's at," Pastor said.

Pastor provided 12 News with the documents that he says prove the state should have known Egurrola was living in the foster home.

"The problem he has in this case and that DCS has in this case is that all of the information needed to make a good decision about placing the child was available and they just didn't act on it," said Pastor.

Governor Ducey and Director McKay have yet to explain how exactly this happened. Ducey told 12 News he is limited in what he can say because this case is under investigation.