Breonna Taylor case: LMPD confirms it is preparing for a decision from Attorney General's Office

Although no timetable has been released in Breonna Taylor decision, LMPD's interim chief has declared a 'state of emergency' for the police department. 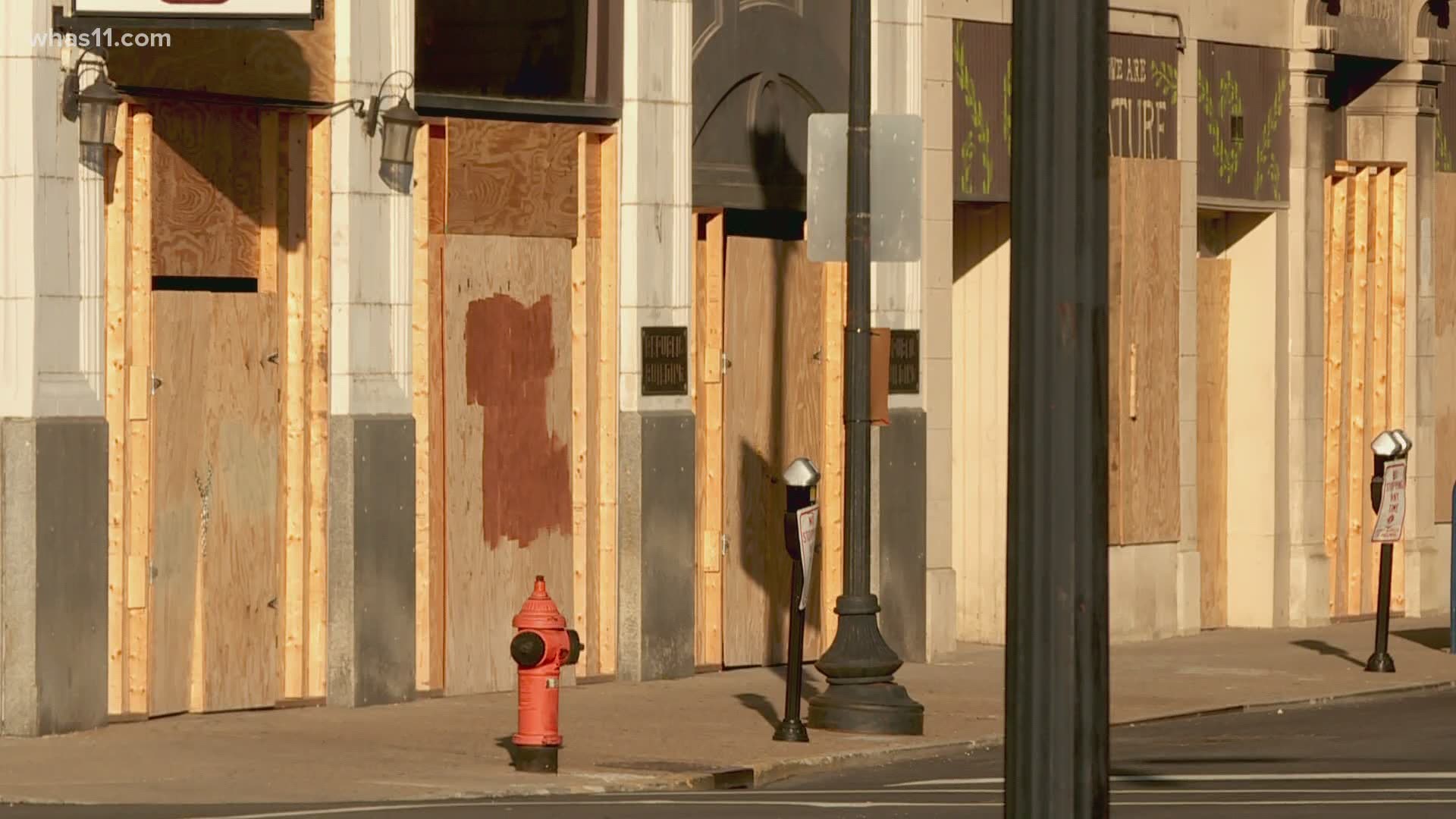 Schroeder released a statement saying all off-day and vacation requests were canceled until further notice. The statement also noted that no timetable for Cameron's decision had been given.

"As we prepare for Attorney General Daniel Cameron’s announcement in the Breonna Taylor case, LMPD is canceling all off-day and vacation requests until further notice. The public may also see barriers being staged around downtown, which is another part of our preparations. It is important to note that the AG has said there is no timetable for the announcement."

There were several other businesses seen boarding up in downtown Louisville but it's not yet known if that is in anticipation of a decision being announced in Taylor's case.

Attorney General Daniel Cameron's office didn't want to release a comment Monday, referring to Cameron's tweet from September 9. The office said it does not have a timetable to release regarding an announcement.

"Everybody is on pins and needles. It's very stressful. We're all exhausted, Sadiqua Reynolds, CEO of the Louisville Urban League said.

"We believe it seems to be an overreaction but maybe they have information we don't have," Reynolds also said in regards to LMPD's preparations underway downtown.

The president of the Downtown Business Association, Rebecca Matheny, sent an email to downtown business owners Monday night with guidelines to follow. She encouraged the removal of any exterior objects outside of buildings, parking plans off streets, and employees to begin working remotely if possible.

"The people boarding up and having that kind of reaction is really a very, very realistic response to insurance claim concerns," she said. "Making certain that LMPD has the support that they need, that there are not folks in the way and they can really focus."

"No one wants to presume there's going to be violence. We all like to hope and believe in our fellow citizens that they're going to be peaceful," Matheny added.

Public Works also put "no parking anytime" signs on nearly every meter downtown Monday, as Jefferson Square protesters also made their own preparations.

"We're wearing wristbands and we're holding people accountable," Travis Nagdy said, who says he's protested over 100 days at the square. "We're all just worried about everybody being safe. We just need people to be safe or all of this was for nothing."

The federal courthouse downtown is already closed this week as a decision in the case looms.

"I don't think anybody knows and I think everyone is preparing for the worst and I think emotionally we should try to prepare for that, but I'm optimistic about justice."

Breonna Taylor was shot and killed on March 13 after officers executed a no-knock warrant at her apartment as part of a drug investigation, LMPD said. Officers Myles Cosgrove, Jonathan Mattingly and former officer Brett Hankison opened fire after Taylor's boyfriend Kenneth Walker admits he fired a shot, thinking it was a break-in.

Taylor was struck multiple times by gunfire and died on the scene.

Protesters around the country have been calling for charges, arrests and firing of the two other officers in the case.

Brett Hankison was fired in June. His termination letter states he "blindly fired 10 round into Taylor's apartment." Cosgrove and Mattingly were reassigned. Joshua Jaynes, who applied for the warrant, has also been reassigned.

The PSU is investigating whether Sgt. Jonathan Mattingly, Det. Myles Cosgrove or Det. Joshua Jaynes broke any LMPD policies. Mattingly and Cosgrove fired their guns the night Taylor was killed and Jaynes is the detective who requested the no-knock warrant for her apartment.

Any disciplinary action could range from written reprimand to termination.

Here's a copy of the LMPD's 'state of emergency':

During his media briefing Monday, Governor Beshear said he received interest about a general request that had to do with the Kentucky National Guard, but he has not deployed them.

If they are deployed, Beshear said the guardsmen would answer to a National Guard Commander. He also mentioned that it's much like Kentucky Police officers who answer to their commander and not local police commander.

RELATED: Here are the police reforms agreed on in settlement with Breonna Taylor's family