Joe Pacello was fired in March after a former police officer accused him of sexual assault. Now, he's appealing his termination and sharing his side of the story. 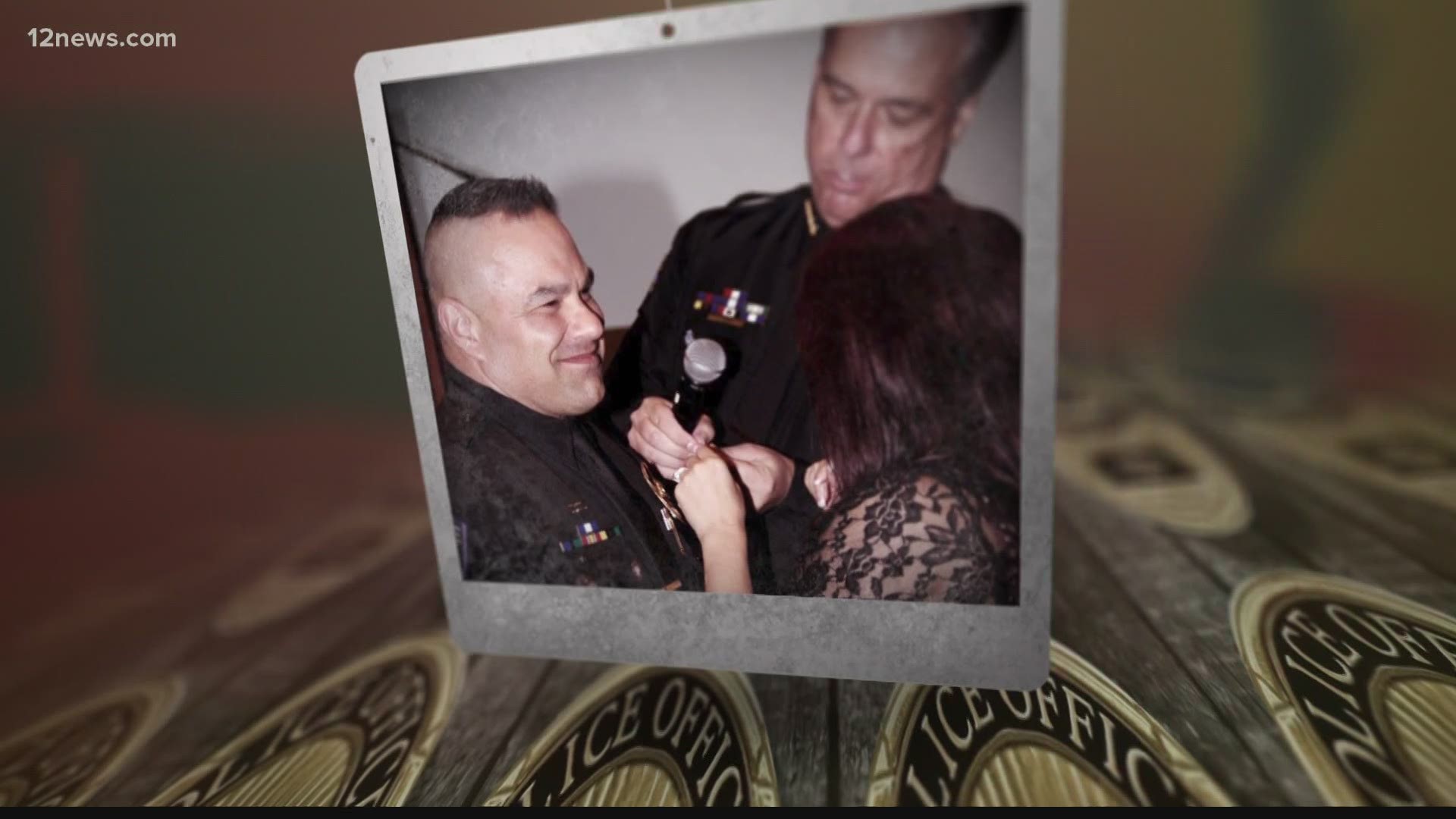 GOODYEAR, Ariz — The former Goodyear Police SWAT commander and lieutenant in charge of the Professional Standards Unit who was fired in March after sexual assault allegations is fighting for his job back.

Joe Pacello was fired for “conduct unbecoming” and “infamous conduct” following an internal affairs investigation conducted by the Arizona Department of Public Safety that found evidence he handcuffed and blindfolded a female officer, Jamie Cole, in his home in 2017.

Pacello told investigators he filled his bathtub with ice water and Cole submerged her head in the water repeatedly while handcuffed. Pacello said that he was preparing her for the Goodyear PD SWAT test.

Pacello was married, but the two had been involved in a secret sexual relationship since 2015 before Cole became a Goodyear police officer. Pacello said that following the ice water exercise they engaged in sex acts.

Cole, however, told investigators that during the 2017 incident, Pacello had sexually assaulted her and threatened her life.

During Pacello’s appeal hearing on May 17, attorneys representing the City of Goodyear said the 2017 incident was one of two allegations against Pacello that lead to his termination.

Pacello said that his termination is not justified and he argued his case during a two-day hearing. On one side of the small room sat the current chief and deputy chief for the Goodyear Police Department ready to defend their decision to end Pacello's career. On the other side sat several current and former Goodyear police officers showing support for Pacello as he made his case.

“I want my job back. I’ve dedicated my entire life to Goodyear Police," Pacello said during testimony.

In 2015, Pacello, who was married, began a secret relationship with Jamie Cole. Shortly after their relationship began, Cole became a police officer with Goodyear PD.

In Pacello's appeal hearing, city attorneys specifically detailed the two incidents that they say led to his termination.

In an interview with the 12 News I-Team, Jamie Cole said she wanted the secret relationship between her and Pacello to end by the end of 2016.

Months later, in early 2017, she went on a date with someone else. During the hearing, Pacello said he found out about the date and that not long after, he invited Cole to his house.

Cole said she believed she was going there to talk, but when she arrived, she said Pacello handcuffed and blindfolded her and threatened her. She said he took her to his bathroom where he had filled his bathtub with ice water. Cole said he forced her to submerge her face.

“I literally thought that I was gonna die," Cole described in an interview with 12 News. “And he started putting my head under the water when I was still handcuffed and I thought, okay I am really going to drown."

Following the incident, Cole continued her secret relationship with Pacello for two years.

During his appeal hearing, Pacello disputed parts of Cole's story. Pacello said he had been training Cole in the gym for the SWAT team for six months prior to the incident because she wanted to be the first female to make Goodyear PD's team.

“In order to be able to perform what was necessary to make it through the prerequisite to SWAT testing and the selection day, which I guess we have been calling ‘Hell Day’ here today, she needed to get significantly stronger," Pacello said.

As the 12 News I-Team first reported, 'Hell Day' is the final secret initiation day recruits must undergo in order to join the department's part-time SWAT team.

“I was a SWAT Operator on the SWAT team. Participated in numerous testing processes. Obviously, not me physically, but me giving parts of the test," Pacello said.

The I-Team has learned that over the years, SWAT recruits have been blindfolded and handcuffed along with a variety of extreme testing including being exposed to gas without a mask. Recruits have also been told to stand in a kiddie pool filled with ice water then told to put Legos together.

On that day in 2017 at Pacello's house, he said he created his own training specifically for Cole to prepare her for the SWAT test.

“Yes I’m training this person for SWAT, and, but this is not what we do in SWAT," Pacello explained. "This is what Joe Pacello, not Lt. Pacello, but Joe Pacello, came up with in his mind to create a training scenario to work on somebody’s stress and anxiety."

Pacello said he did blindfold and handcuff Cole then take her to his bathtub filled with ice water. He testified he then told her to repeatedly submerge her face in the water for ten seconds at a time.

"And because she had the handcuffs on, I was there to kind of help guide her just to make sure she didn’t lose her balance as a safety precaution," Pacello said during his appeal hearing.

At one point, Pacello said Cole fell in.

“Her body was off balance. And I recognized that. And simultaneously to me recognizing that she kind of went, for lack of a better term, a** over tea kettle so she was about to fall in at which point I then grabbed her and pulled her up and you know her shirt had gotten wet," Pacello said.

Pacello said Cole was unable to submerge her face for the entire ten seconds but came close. He said after the training was over, she consented to sexual acts.

Cole reported the incident to Chandler police detectives in August of 2020, after speaking to Goodyear Police Chief Santiago Rodriguez about her relationship with Pacello.  Pacello was then placed on administrative leave.

The Chandler Police Department was brought in to conduct a criminal investigation into the sexual assault allegations. They did not recommend charges.

The Department of Public Safety conducted an internal affairs investigation and submitted a report to Goodyear.

For the department, Pacello's version of events alone was enough reason to fire him.

“Consented or not consented, there is still an issue with it," Rodriguez said during the appeal hearing.

“So what I am asking you is let’s say and it did come to light that she said yeah I consented to this, would this be an issue?" asked Pacello's attorney Kathryn Baillie.

"Look into the actions the lieutenant had done?" Rodriguez asked.

"With the training," Baillie said.

"And you call it training, obviously it’s not training that we would condone in the police department," Rodriguez said.

The 2019 incident: Neighbors witness an altercation

According to attorneys representing the City of Goodyear, a second incident also led to Pacello's termination.

Attorneys detailed an incident in the summer of 2019 when Pacello showed up to Cole's home and tried to get inside locked doors while yelling outside, after Cole had ended the sexual relationship, according to testimony.

The incident was witnessed by neighbors. The I-Team obtained audio recordings of conversations between a neighbor and a detective from Chandler Police.

“She told me she was scared of him," said the neighbor referring to Cole and Pacello in interviews with Chandler police. “Quite a few times she brought her children over to my house because she was scared for their safety.”

By 2019, Pacello and Cole's secret relationship was on the rocks and the two were breaking up. It was around this time that a neighbor witnessed Pacello go over to Cole's nearby house.

“Actually yelling and screaming at her and trying to push the door open and he would constantly come over and harass her," the neighbor said.

“I didn’t call the police because she is the police and I didn’t want to cause her any issues.”

During his appeal hearing, while making a case to get his job back, Pacello said that neighbor misunderstood.

“I went to open the security screen door but it was locked and the interior door I noticed was closed so at that point I rapped on the door several times and double-checked the door," Pacello said.

“Did you scream and yell outside her residence at that time?” Baillie asked.

Pacello said he then went through Cole's garage and walked inside through an unlocked door. It's something he said he did frequently.

“That’s when I raised my voice and said hey what the f*** I’m standing outside you knew I was coming I’m looking like an idiot out there," Pacello explained. "Something to that effect.”

Pacello said he has a loud voice and often uses curse words so that night was nothing out of the ordinary.

Goodyear's police chief and deputy chief, however, said the incident was problematic.

“All I want is to continue working in this profession, to finish my time.”

Pacello's attorney argued Cole reported the incidents in August of 2020 because she is a "scorned woman" and was upset Pacello did not leave his wife for her.

“And now she’s left the agency and she throws a bombshell and leaves," Baillie said.

Goodyear city attorneys, though, argued it wasn't Cole who was jealous. They said it was Pacello who wanted her back. Attorney Steve Coleman read from an email Pacello sent Cole in June of 2020, just two months before she came forward and more than a year after their relationship had ended.

“It's not easy knowing someone else has the woman I love," Coleman read. “And most of all love with all my heart despite you having moved on.”

Pacello and his attorney believe termination is too harsh for the 16-year police veteran and believe he deserves to get his job back.

“There is no way I got due process here," Pacello said fighting back tears. “I have sacrificed my personal life to be the best officer and leader in this agency.”

“All I want is to continue working in this profession, to finish my time.”

The appeal hearing officer reviewed the testimony and has made a recommendation to the Goodyear city manager. The city manager now has thirty days to ultimately decide whether to uphold Pacello's termination or allow him to go back to work for the police department.