'I was covered in soot' | They live in Charlotte now, but 20 years ago, they were in New York. Here are their 9/11 stories

Sept. 11, 2001, is a day most people will never forget. But for these Charlotte-area residents who were in New York that fateful day, life has forever been changed. 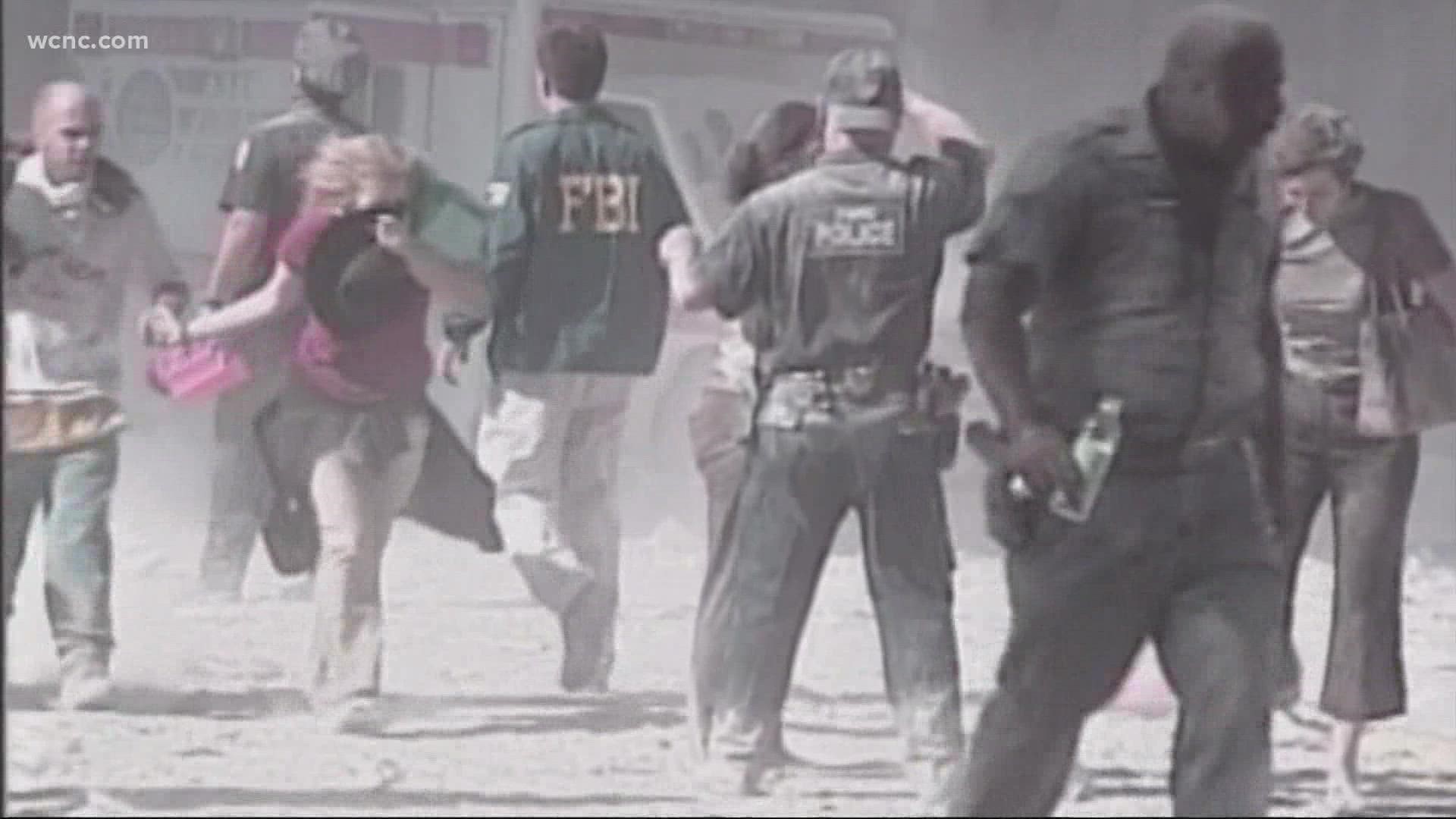 Sept. 11, 2001, is a date most Americans will never forget. WCNC Charlotte spoke with some Charlotte-area residents who were in New York on the day of the attacks. Below are their stories from that day, in their own words.

Back in 1999, before the events of 9/11, Dennis Leon was working a temp job at the World Trade Center. Fast forward two years, Leon had just gotten a job on 60 Wall Street -- less than a mile from the Twin Towers.

Leon said he was at work when he got a call from his mom at around 8:40 a.m. She was watching the Today Show and told him a plane had hit the World Trade Center.

Leon said he wasn't sure what was going on until about 15 minutes later when he saw some papers flying.

"So, we knew something was wrong," Leon remembered. "Some people went out to see what was going on."

Around 9:04 a.m., Leon said some of his coworkers saw the second plane hit the south tower. 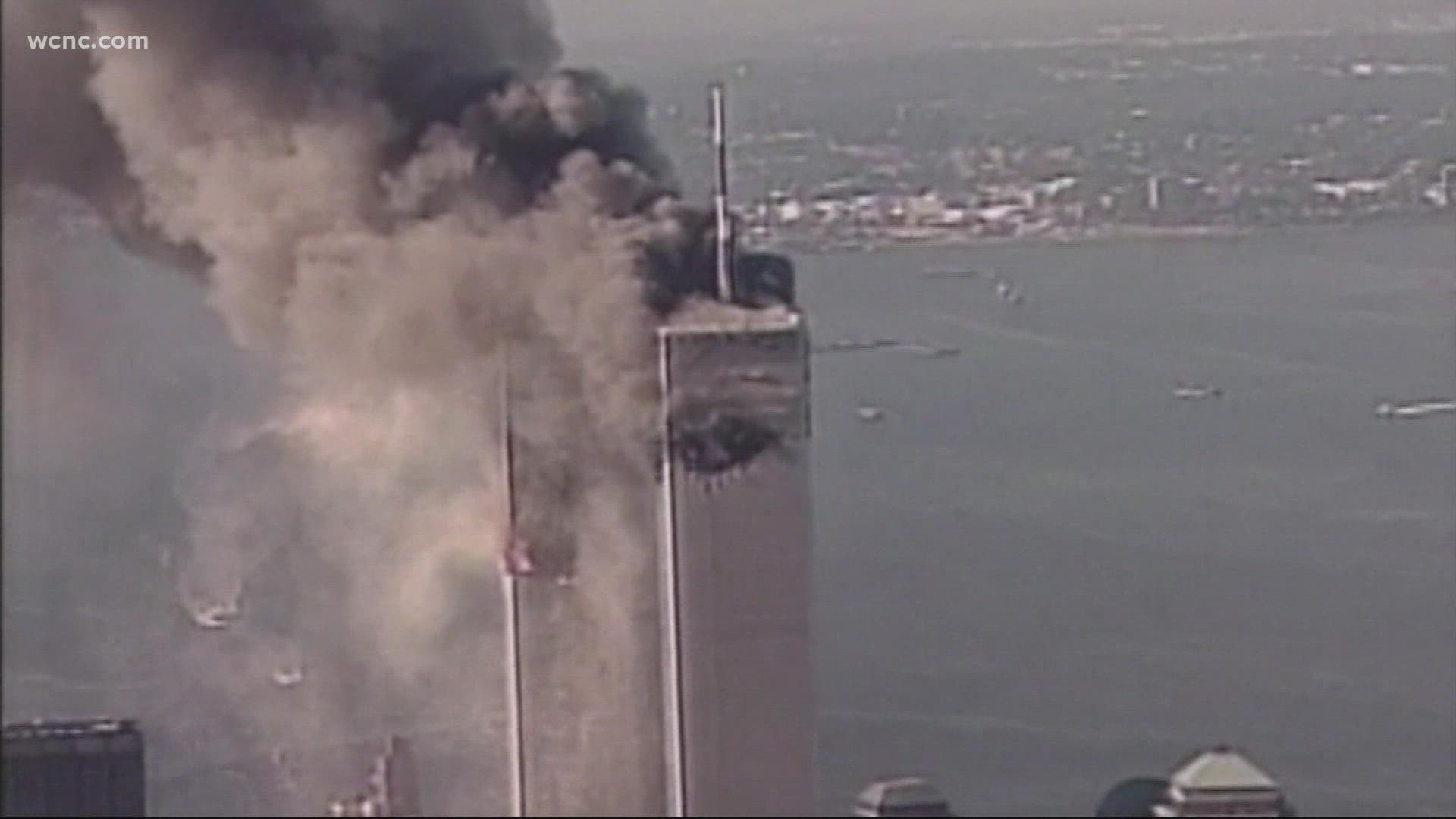 "And I definitely heard the noise," Leon said. "It was very rattling and shaking."

Leon said a lot of his coworkers decided to leave the office and run. At that moment, Leon thought the best thing to do was stay.

"It just looked like another planet," Leon said. "It was just dusty and dirty."

Around 9:40 a.m. when the first tower fell, Leon said he just saw this huge plume of dust. He was closer to the second [south] tower and knew he had to get out of his building.

"People were getting worried, like 'What's going to happen next?'" Leon recalled.

Leon and his coworkers evacuated their building and walked out into the chaos.

"We decided to just go straight home," Leon said. "The subways and almost all of the metro system was done."

So Leon walked. He walked 10 miles home, covered in soot.

Theodore Flor lives in Charlotte, North Carolina, now, but 20 years ago, he lived in New York. Flor, at the time of the attack, worked at the World Trade Center.

By some miracle, he had been sent to California on a work trip on the day of Sept. 11, 2001. That trip may have saved his life.

Flor said some of his friends and office workers told him to turn on the TV - something had gone wrong in their building.

"We saw the building next to ours on fire," Flor recalled. "And they were trying to figure out what happened."

Flor said when he was first watching the news, his building had not yet been hit. Flor was scrambling to get ahold of his friends in New York. 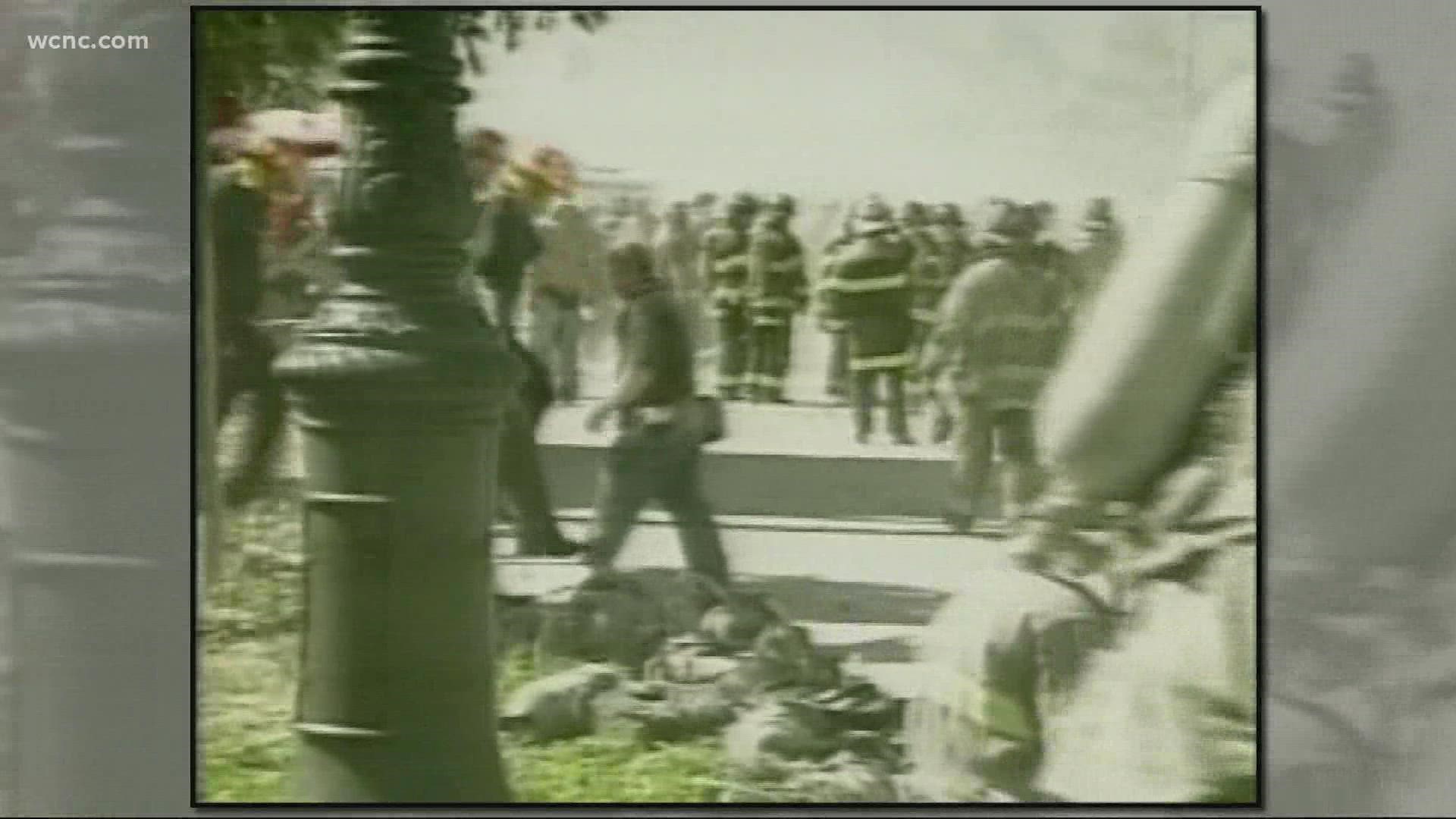 "It was one of those events where you couldn't get ahold of anybody in New York because the power lines had been overwhelmed," Flor said.

Flor said even now, 20 years later, he feels a little bit of guilt that he wasn't in New York to help.

"But, I was also kind of glad that I was away," Flor said. "Because if I wasn't, I might not be here today."

Flor said, fortunately, his business manager had ordered all of his employees out onto the streets, ignoring the instructions to not evacuate. Flor said there were just four people left in his building when the second plane hit.

"They were able to get out before the building collapsed," Flor said.

Flor said if he would have been working in the World Trade Center that day, he would have likely been the fifth person still there.

Flor, reflecting on 20 years since the tragic attacks, said he still gets sad thinking about all of the people who lost their lives that day.

"We lost a lot of people," Flor said. "And we continue to lose those brave firemen who have gotten cancer since then."

RELATED: 20 years later: The impacts of the 9/11 attacks are still felt today

About two months after the attacks, Flor said he flew back to New York and they took him into the base of his building.

"It was insane," Flor recalled. "The dirt, destruction and the smell, you'll never forget that smell."

Before he left for his work trip to California, Flor bought a teddy bear at the World Trade Center - Snergly Bear.

"He is a World Trade Center survivor," Flor said. "He's been traveling to 14 countries so far."

Flor said he later asked his current wife, Ruthann, to marry him at the memorial to his tower in New York City to try to transform it into a happier place.

Kadijah Goosby was just a fourth grader living in New York on Sept. 11, 2001.

Goosby said her school, located in Brooklyn, had a picture-perfect view of the Manhattan skyline. She could see the Twin Towers and the Empire State Building.

"That was always in my [sight] growing up," Goosby said.

Goosby said she remembers that day 20 years ago like it was just yesterday. She was in music class with her fourth-grade class when her teacher walked in with a newspaper and a radio.

Goosby said her teacher turned on the radio and told them there was a bombing in Manhattan.

"As soon as he turned on the radio, we could hear people in the background just screaming," Goosby recalled.

Goosby said her class sat in silence listening to the radio when another teacher walked in and told them a second plane had just hit the second tower.

"We were still pretty young, but we thought it was a terrorist attack," Goosby said. 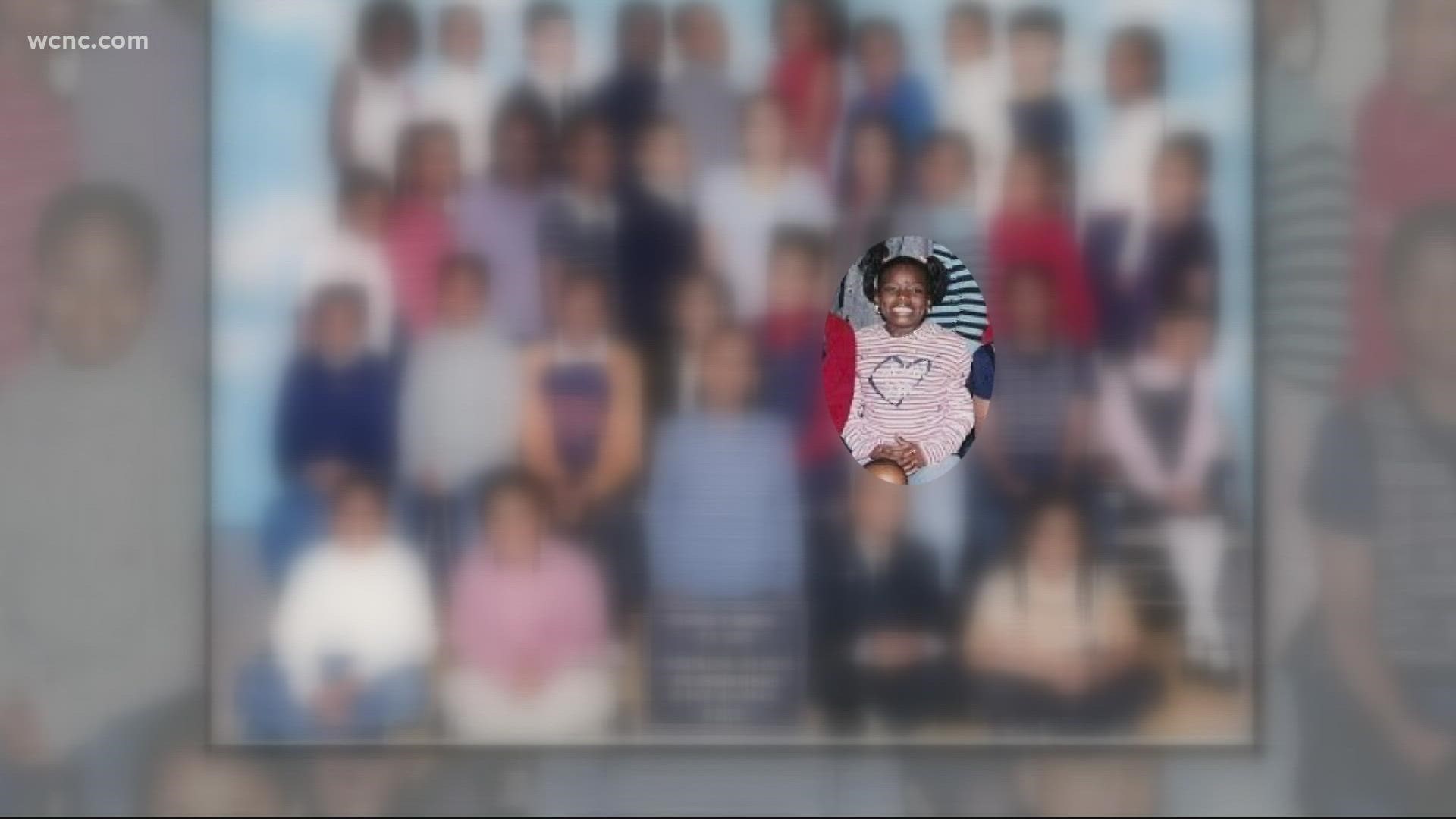 Moments later, an announcement was made over the intercom telling all students to report to the auditorium so their parents could pick them up. Goosby just recalled a rush of parents running around and phones ringing off the hook.

Goosby said when she got home she could see Manhattan in the distance and she could just smell the smoke.

"It was so scary," Goosby said. "We knew so many people who worked in Manhattan. We saw people coming hours later from the train just covered in soot and dirt and residue."

Approaching the 20th anniversary of 9/11, Goosby said it never gets any easier for her.

"I lost cousins that day in the attacks," she said. "I don't like the whole celebration we do every year. It just makes me sad."