On the 20th anniversary, Mr. Sergio Holguin and his department are teaching students who weren't born on 9/11 about the impact of the attacks. 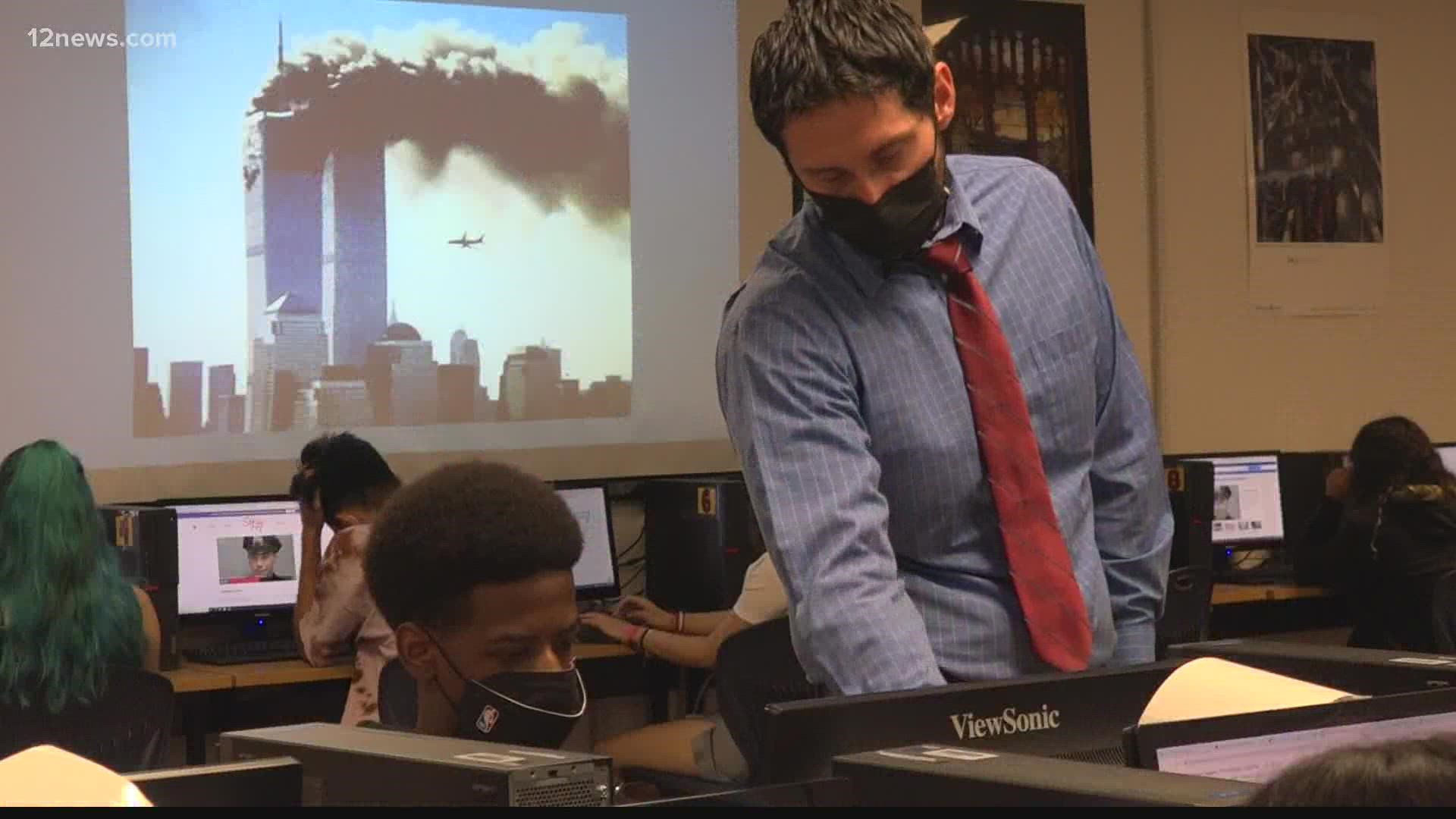 Inside Mountain Pointe High School’s library, students file into a computer lab on the far wall of the building.

“Hello, hello! Come on in,” Sergio Holguin, the Social Studies Department Lead at Mountain Pointe said as students walk in the door, exchanging light pleasantries back.

The class Holguin welcomes is a room full of junior Advanced Placement U.S. History students. They were born around 2004-2005.

“I was exactly their age when this happened,” Holguin said.

He’s referring to Sept. 11, 2001. Holguin was 16-years-old, a junior at a Las Cruces, New Mexico high school. Holguin said he was getting ready for school when he heard Katie Couric’s voice on the TV in the background sound different.

“I tuned in just in time before the second plane hit,” Holguin said.

RELATED: My first day as a TV reporter was on 9/11. Now I’m covering its 20th anniversary

Like so many Americans Holguin remembers the day vividly.

“Our teachers tried to teach, but it was such a weird day they just turned on the news and we just watched the news all day,” Holguin said. “So, pretty wild.”

Twenty years later, Holguin is the one teaching about 9/11.

Holguin and his colleagues shared stories from that day, photos of the wreckage, interviews with first responders and how the aftermath affected them.

Even though the students they taught weren’t alive in 2001, they say they’ve experienced it too.

“My family members, some of them have gone to join the military because of the specific cause,” Gaby Polacadena, a Mountain Pointe junior, said. “Like my uncle immediately enrolled into the military, not too long after this.”
They, too, recognize the need to learn, to remember and respect.

“I think it’s always the same significance if not more,” Buddy Samsel, a junior at Mountain Pointe said. “It’s a very valuable piece of history that we need to keep learning about.”

“We are living in a major historical event, the pandemic, for the past two years has totally changed us at the national, the family level and the community level as well,” Holguin said. “It’s important that they can see they’re a part of history now, just like I was, 20 years ago on 9/11.”

RELATED: 'In order to save my soul, I had to remove myself': New Yorker seeks healing in Arizona