Only 35 people in the world have been diagnosed with PPP2R5D. 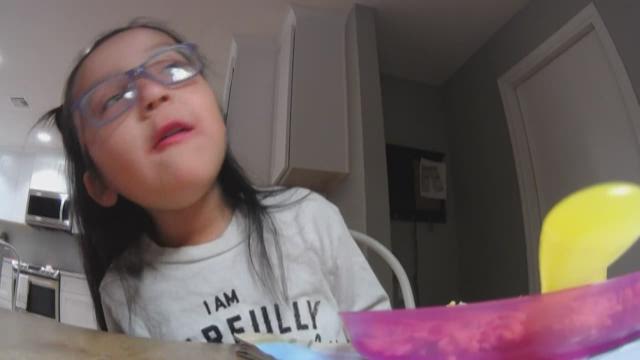 There is no such thing as a typical morning at the De Orta house. On this day, 3-year-old Darian runs around like he owns the castle.

His big sister Avianna has found a small chair to sit and read her book while their mom makes breakfast.

Before the eggs are scrambled and the milk is poured, Nancy spends about 30 minutes bathing Avianna and then dressing her. The 6-year-old is not able to put her clothes on by herself.

“We have to brush her teeth for her as well,” said De Orta.

In some ways, that part of the morning is normal and has been like that since Avianna was born.

“It is tough, but we celebrate her victories,” said De Orta.

This medical journey has been paved with frustration and questions. Doctors spent almost four years trying to figure out why Avianna had issues with her speech, learning and severe scoliosis.

As a kind of last-ditch effort to understand what was going on, Avianna had her genome mapped, a process that looks at a person’s molecular markers to better understand potential diseases and disorders.

The results were eye-opening and frightening.

Avianna was diagnosed with a rare genetic disorder referred to as PPP2R5D. To date, only 35 people in the world have been diagnosed.

The neurological disorder has now been linked to autism, Alzheimer’s and even cancer. Avianna is heading back to Washington DC this week to take part in a first-of-its-kind research study and conference focused on PPP2R5D.

Researchers from all around the world and 25 of the 35 people diagnosed are expected to take part in the three-day conference. Doctors hope it’s the start of what will hopefully lead to clinical trials.

The hope is to someday treat or even reverse the mutation.

The study, while focused on those with PPP2R5D, could also lead to breakthroughs for people with Alzheimer’s, autism and cancer.

“I always joke with the other moms that our kids are going to change the world,” said De Orta.

The diagnosis is a piece to a puzzle De Orta calls big, but more pieces may be coming with this conference and study. De Orta is optimistic that someday her daughter may be able to do the things most of us take for granted.