Amy Watson was diagnosed with COVID-19 more than two months ago and is still dealing with symptoms. 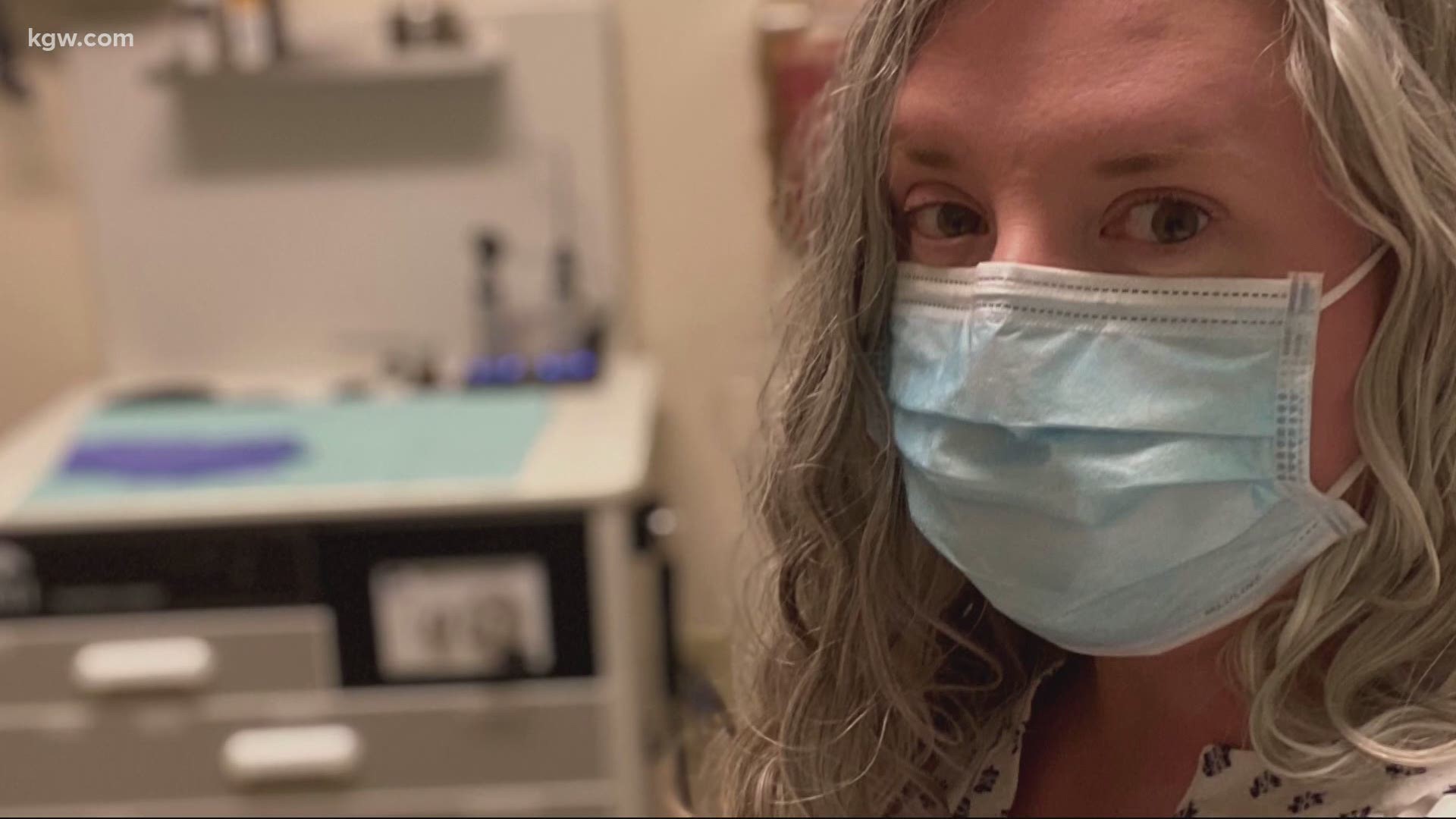 PORTLAND, Oregon — A Portland woman was diagnosed with COVID-19 more than two months ago and is still dealing with symptoms.

She's far from alone. The virus is causing long-term health issues and medical experts are trying to figure out why.

Amy Watson started a support group on social media to help others like her, and KGW's Morgan Romero talked with her Sunday about her journey.

Watson says she first got sick on March 15, meaning she’s been ill for more than 100 days. For every one of those days, she says she’s had a fever. Her case is considered mild to moderate because she’s been recovering at home and didn’t require hospitalization.

The 47-year-old Portland preschool teacher tested positive for coronavirus in April, a month after she first got sick. Since then, as recently as mid-June, she's tested negative three times.

Over time her symptoms have progressed and changed entirely, never fully going away.

“I have been pretty much plateaued with my symptoms for about a month or so now. Really, all doctors can do now at this point is to treat my symptoms. And the fever doesn’t budge with any kind of medication,” Watson said. "I am taking medication for nerve pain, which is helping somewhat but it’s definitely still there. It’s the strangest - it feels like a sunburn but under the surface of my skin.”

COVID-19, caused by the novel coronavirus, has been affecting multiple different systems in Watson’s body, including her vascular and neurological functions. Her story is much like others we’ve seen around the world in recent weeks.

“It does not discriminate. No one is safe and you just have to really take precautions and be so careful. There's no treatment, there's no fixing this,” Watson added.

Her doctor in Oregon diagnosed her with post-viral fatigue syndrome but can't offer any real solutions or treatment, she says.

“Doctors are doing the best they can with the knowledge they have but they really need to find ways to collaborate and share information in real-time because it is a novel virus. We have to learn as we're going here," Watson said.

"My hope is that the big wigs: the WHO, CDC, NHS in the United Kingdom, will acknowledge these symptoms and start talking about ways to treat patients with long-haul COVID recoveries."

She turned to others online for support and ultimately created a couple of Facebook groups for thousands of people around the world in it for the long-haul in their recovery from COVID-19.

Group members share data and information from recent studies and reports, and direct people to specialists in each others’ areas.

“It has helped me morale-wise beyond words to be able to help other people,” Watson said, “We’ve had so many people come into our group and they’re like, ‘I thought I was the only one, I’ve been so alone. Even my own family doesn’t really believe me, my doctor won’t listen to me, I thought I was crazy'.”

Watson and her fellow Facebook page administrators are now working with doctors and researchers from Mount Sinai Health System in New York City, as they monitor patients whose symptoms stick around. Other major medical centers around the country are trying to figure out what's going on and how they can help, too.

Dr. Mitchell Miglis, a neurologist at Stanford University, told NBC News that it's too soon to know whether the condition will eventually resolve or if it will become a chronic disease.

“We just want the medical community to acknowledge that these symptoms are really happening to us,” Watson told KGW. “We have to have some patience with physicians but we do want them to listen to us and take our symptoms seriously because it’s really scary. I mean, this illness is literally incredibly isolating.”

Watson tries to eat well, sleep and exercise a bit as she holds out hope and waits to feel better.

RELATED: ‘It’s absolutely nothing like the flu’: Oregon City woman on day 53 of coronavirus battle

RELATED: Health officials expect COVID-19 cases to continue to surge in Oregon over next month