The poll could be a breakthrough in medical research, as one expert claims this is the first time in history a vaccine could have also acted as a therapeutic. 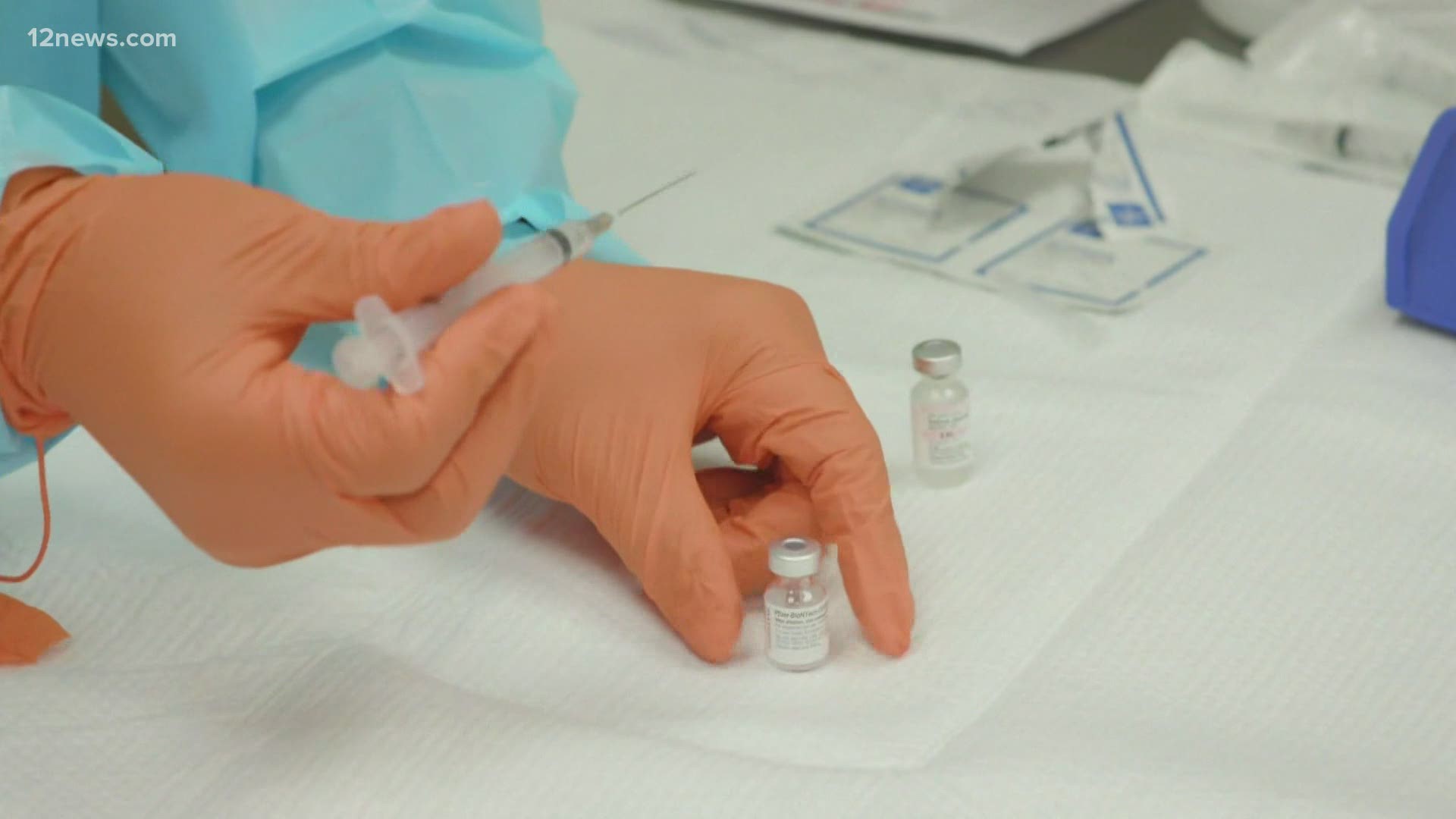 ARIZONA, USA — There was a feeling of relief after Arizona resident Kevyn Calvo got his first shot of the Pfizer COVID-19 vaccine. His father died last year due to coronavirus complications and this was Calvo's way of honoring his death.

But Calvo felt another unexpected relief in the days after getting vaccinated: The "long-haul" COVID-19 symptoms he had been dealing with since last April, when he was first infected with the virus, were gone.

"I'm now able to walk, I'm able to breathe, I'm able to do things I never thought I'd be able to do again," Calvo said. "I used to have 60% oxygen capacity, no stamina, had inflammation everywhere...but after the shots, I feel better."

"Long-hauler" is the term given to people who feel COVID-19 symptoms for weeks or months after first getting the virus, according to Harvard Medical School. Some long-haulers may even feel better for weeks and then relapse with old or new symptoms.

Calvo isn't the only one who reported experiencing long-haul symptoms drastically improving after getting vaccinated: 42% of the more than 900 long-haulers polled by the grassroots organization Survivor Corps said they had the same experience as Calvo.

The poll did not specify which vaccination those who said they felt better received, nor did it say how long it took after the vaccination for their symptoms to begin improving.

Survivor Corps asked its members how they felt after the Covid-19 vaccine. Out of 931, 42% posted they felt better. Get your vaccine today. It could help YOU feel better, too! @dianaberrent @NatalieJLambert @DrMJoyner @drlucymcbride @uche_blackstock pic.twitter.com/GRiM7m3Xp5

Unexpected relief for some COVID-19 long-haulers

More than 163,000 COVID-19 survivors from across the nation, including Calvo, have found a new community on the Survivor Corps Facebook group.

The group originally started as a place where survivors could share their stories and connect with the medical, scientific and academic research communities.

But since some members in the community have started to get vaccinated, a new focus was placed on tracking evolving long-haul symptoms, such as conducting the poll mentioned above.

"When the vaccine was rolled out, we were ready and tracking every possible thing that could go wrong," page creator and Survivor Corps founder Diana Berrent said.

"The one thing that we were absolutely unprepared for was people actually getting better."

Laura Gross, a 72-year-old from New Jersey, is one of the Survivor Corps members who said their symptoms improved after getting the Moderna vaccine. Unlike Calvo, Gross' long-haul symptoms affected her neurologically and gastrointestinally.

On the third day after getting the vaccine, Gross said she felt like a new person.

"It was like somebody flipped a switch and I was back," Gross said, recounting her days after getting vaccinated. "It makes me a little teary to even talk about it like this."

The far-reaching implications of a vaccine working as a therapeutic

Berrent has seen a number of people in the Facebook group posting that they experienced everything from mild symptom relief to complete resolution of symptoms after receiving a COVID-19 vaccination.

When she began to see these reports, Berrent and Dr. Akiko Iwasaki, an immunology expert at Yale University, began tracking survivors and their experiences.

"If the vaccine is working as an anti-viral, if it is working to stop the virus's replication, there may be evidence that COVID-19 is lurking in people's bodies or maybe the vaccine is acting as a booster to the immune system," Berrent said.

Dr. Daniel Griffin, an expert in infectious diseases in New York, was also surprised to see the effects of a COVID-19 vaccine on his patients.

Conversations Griffin said he had with some of his long-haul patients led to him creating an ongoing study looking into this phenomenon.

"We have funding to follow 10,000 people who had COVID-19 for five years," Griffin said, referring to what his study will be able to do.

"We have hundreds of people already enrolled and being followed with periodic surveys, questionnaires and blood work to get good numbers on what the actual percent of people who report that they're better in the vaccine group versus who doesn't get vaccinated."

Griffin also claimed that this is the first time in medical history when a vaccine may have also acted as a therapeutic.

The main function of a vaccine has historically been to fight off a virus or disease without making people sick. Vaccines usually only protect people from getting the disease in question and passing it onto others.

The difference that is being seen in the COVID-19 vaccines is not only are they stopping people from getting sick and passing the virus on, they are also reportedly making people who have previously had the virus feel better.

"This is a new frontier," Griffin said.

"The idea that a vaccine can be therapeutic for a disease, the fact that you can get in there after the fact with a vaccine and make a difference, is really exciting and is going to open up a whole new area of research."

But Berrent and Griffin advise that there are some caveats to that population.

Those who have significant lung and heart damage due to COVID-19 most likely won't feel any better after getting a vaccine due to the physical damage caused by the virus.

"Lung and tissue scaring is not going to be cured by a vaccine," Griffin said.

"A lot of the long COVID recovery centers, where people with some of the most severe manifestations go for care, are not seeing the same benefit that we're seeing in patients who seem to be acting more like a chronically ill individual."

Additionally, Berrent said many long-haul individuals who had a bad reaction to the first of a two-dose COVID-19 vaccine refused to get the second out of fear of worsening symptoms.

"Many of those did not go on to take the second dose of the vaccine because of the CDC guidance saying that 'If you've already had a natural infection, you only need one dose,'" Berrent said.

"I would go ahead, based on this information, and get both doses."

Fear of getting any of the doses of the vaccine was widespread among long-haul COVID-19 survivors at the beginning of the year, as many didn't know how it would affect long-haulers.

That fear was present in Calvo as well, but it ended up being alleviated by the stories of improvement from members of Survivor Corps.

After getting his doses, Calvo has decided to become an advocate for getting vaccinated and share his stories in hopes it will alleviate the fear for others.

"I was scared," Calvo said. "But there were members from different states saying that they got the vaccine and felt better. I got better too and all my symptoms disappeared."

Gross acknowledged the reports of some people not feeling the same relief after getting a COVID-19 vaccine. But she said she still recommends that people get a vaccine as she can't imagine anything worse than what she went through.

"If you're a long-hauler, give it a shot," Gross said.

"I gave it a chance, and I'm so grateful that I was one of the lucky ones that the vaccine made a really big difference for. Give it a shot, because nothing could be much worse than long-haul."

Haven't got your COVID-19 vaccine appointment yet? Sign up on the Arizona Department of Health Service's website here or by contacting your local pharmacy.

Find the latest updates on the COVID-19 vaccines for Arizona and the United States on our 12 News YouTube Playlist here.