President Trump suggests he might be firing Dr. Fauci after election

During a rally in Florida, Trump expressed frustration that the surging cases of the virus remains prominent in the news, sparking chants of 'Fire Fauci.' 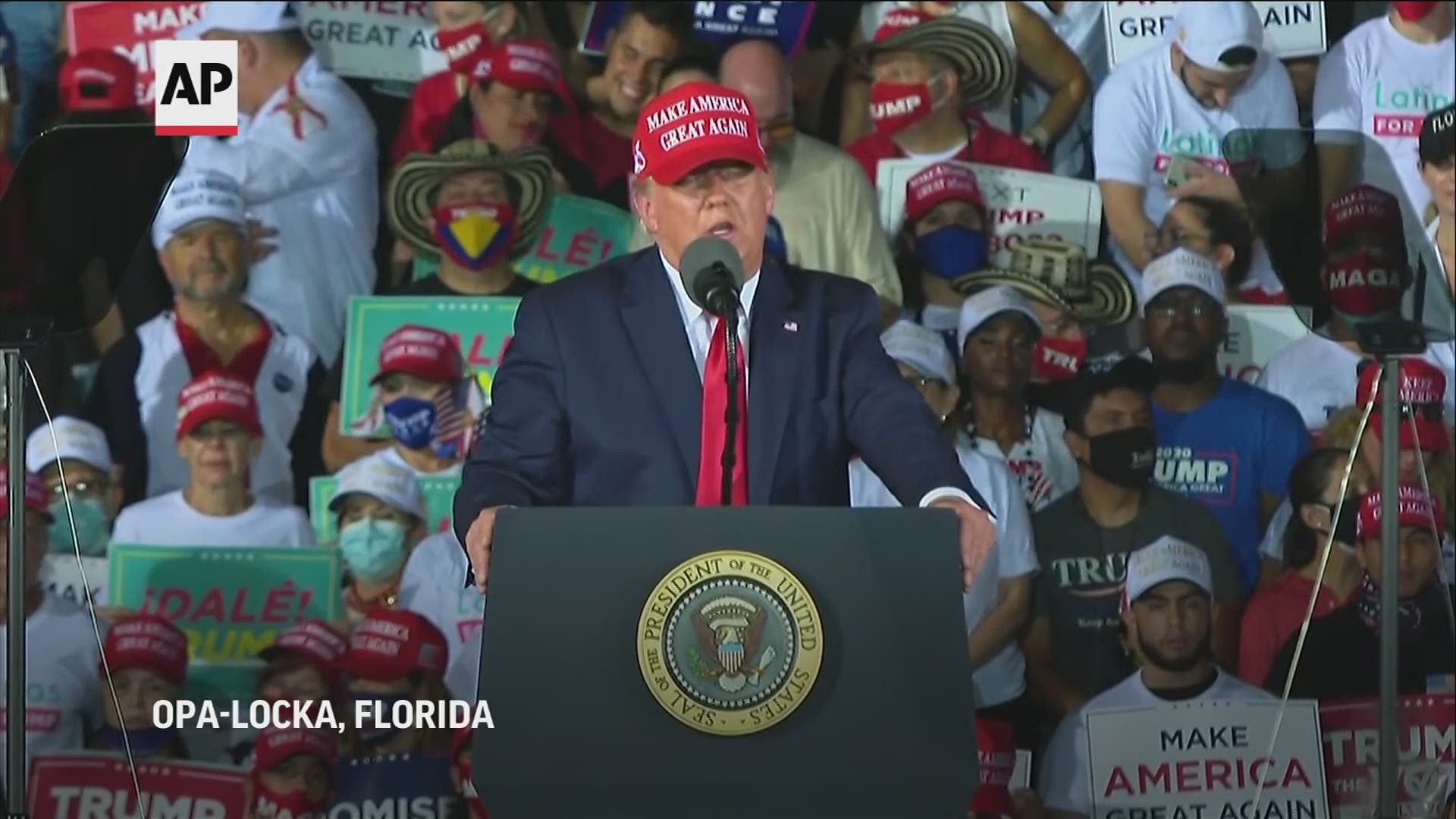 OPA-LOCKA, Fla. — President Donald Trump is suggesting that he will fire Dr. Anthony Fauci after Tuesday’s election, as his rift with the nation’s top infectious disease expert widens while the nation sees its most alarming outbreak of the coronavirus since the spring.

Speaking at a campaign rally in Opa-locka, Florida, Trump expressed frustration that the surging cases of the virus that has killed more than 231,000 people in the United States this year remains prominent in the news, sparking chants of “Fire Fauci” from his supporters.

“Don’t tell anybody but let me wait until a little bit after the election,” Trump replied to thousands of supporters early Monday, adding he appreciated their “advice.”

As he prepared to fly to a campaign stop in Ohio hours later, Democratic presidential nominee Joe Biden tweeted, “We need a president who actually listens to experts like Dr. Fauci.”

We need a president who actually listens to experts like Dr. Fauci.

Biden has sought to keep the presidential campaign focused on what he says was a disastrous federal response to the pandemic. Trump is countering by using the race’s final hours to accuse his opponent of wanting to force the country back into a lockdown to slow the spread of the virus.

RELATED: Fauci: US to deal with 'a whole lot of hurt' with surging coronavirus cases

RELATED: COVID-19 vaccine likely to come next year, not before, Fauci says

It’s the most direct Trump has been in suggesting he was serious about trying to remove Fauci from his position. He has previously expressed that he was concerned about the political blowback of removing the popular and respected doctor before the election.

The latest flare-up follows Fauci making his sharpest criticism yet of the White House’s response to the coronavirus and Trump’s public assertion that the nation is “rounding the turn."

Fauci has grown outspoken that Trump has ignored his advice for containing the virus, saying he hasn’t spoken with Trump in more than a month. He has raised alarm that the nation was heading for a challenging winter if more isn’t done soon to slow the spread of the disease.

In an interview with The Washington Post this weekend, Fauci cautioned that the U.S. will have to deal with “a whole lot of hurt” in the weeks ahead due to surging coronavirus cases.

Fauci said the U.S. “could not possibly be positioned more poorly” to stem rising cases as more people gather indoors during the colder fall and winter months. He says the U.S. will need to make an “abrupt change” in public health precautions.

Fauci added that he believed Democratic presidential candidate Joe Biden “is taking it seriously from a public health perspective,” while Trump is “looking at it from a different perspective.” Fauci, who’s on the White House coronavirus task force, said that perspective emphasizes “the economy and reopening the country.”

In response, White House spokesman Judd Deere said Trump always puts people’s well-being first and Deere charges that Fauci has decided “to play politics” right before Tuesday’s election. Deere said Fauci “has a duty to express concerns or push for a change in strategy” but instead is “choosing to criticize the president in the media and make his political leanings known.”

Trump had already stepped up his attacks on Biden in recent days for pledging to heed the advice of scientists in responding to the pandemic. As Trump charges that Biden's measures to slow the pandemic could keep Americans home and hurt the economy, the former vice president has countered that the only way out of the health crisis is to heed the warnings of Fauci and other medical professionals. Biden has also been careful not to endorse another national lockdown.

Trump has recently relied on the advice of Stanford doctor Scott Atlas, who has no prior background in infectious diseases or public health, as his lead science adviser on the pandemic. Atlas has been a public skeptic about mask wearing and other measures widely accepted by the scientific community to slow the spread of the virus.

Other members of the White House coronavirus task force have grown increasingly vocal about what they see as a dangerous fall spike in the virus.

Trump's aggressive approach to Fauci carries some risks with the election looming.

A Kaiser Family Foundation poll in September showed 68% of Americans have a great deal or a fair amount of trust in Fauci to provide reliable information on the coronavirus. That compares with 52% of Americans who trusted Biden to do that and just 40% for Trump.

RELATED: President Trump goes after Fauci, tries to buck up his campaign team