A photo of North Paulding High School shared by a student has garnered reaction around the U.S. Now, the same school announced COVID infections. 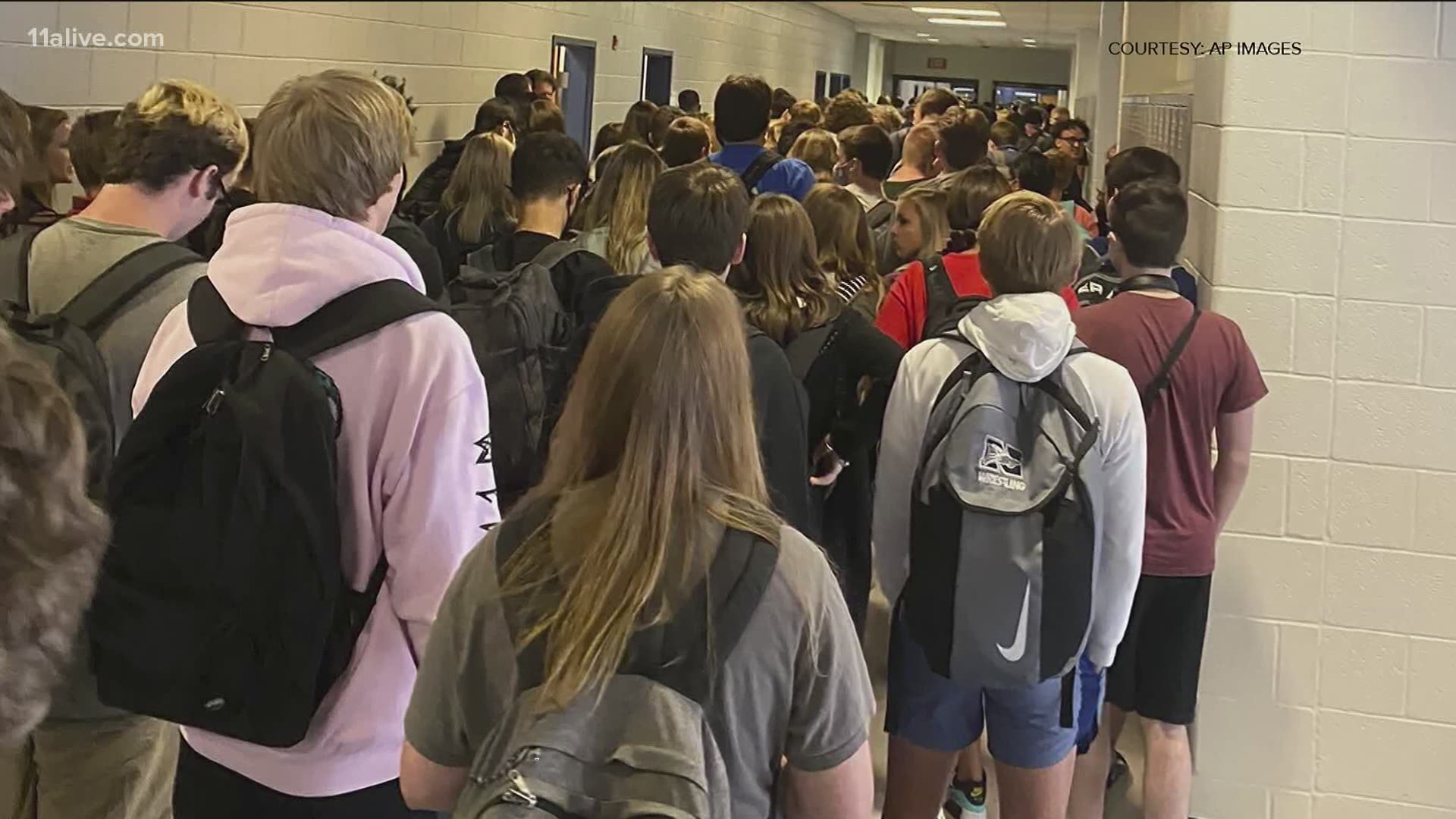 PAULDING COUNTY, Ga. — North Paulding High School was in the news less than a week earlier when a photo of a hallway crowded with students was shared across social media.

Now, the same school has announced to parents that they have confirmed nine cases at the school. A letter obtained by 11Alive sent to parents by principal Gabe Carmona details what parents learned on Saturday.

"We have anticipated that COVID-19 would impact us as it has nearly every community, and the district has worked in partnership with the Department of Public Health (DPH) to proactively implement safety precautions and response plans," the letter said. "I am writing to inform you that we have had additional cases of students and staff who are reporting to us that they have tested positive for COVID-19."

In total, the letter states that the school tallies six students and three staff members who "were in school for at least some time" in the last week who have reported testing positive.

The principal's letter states that the school has followed state health recommendations for reporting and added that "custodial staff continues to thoroughly clean and disinfect the school building daily" with a focus on the affected areas.

"It is my intention to regularly notify the NPHS community of these cases in the interest of transparency and so that we, as a community, can be aware of any trends that arise and respond accordingly," Carmona wrote.

The letter also includes a number of proactive measures parents can take to to "keep classrooms safe and healthy."

These include screening children and taking their temperature twice a day. Parents should also check for COVID-19 symptoms such as fever, chills, headache, sore throat, cough, fatigue, loss of taste, loss of smell, shortness of breath, congestion, muscle aches, nausea, or vomiting.

Those who test positive or urged to get tested as soon as possible, notify the school's front office, and stay home.

As of the first day back, Paulding County Schools reported that 70 percent of its 31,000 returned for in-person classes. However, one parent who officials suggest didn't make the deadline for signing up for at-home learning cried foul over the fact that her daughter and other children in her family would be put on a waiting list. In the meantime, they would be required to attend class in-person.

North Paulding High School also sent a previous letter to parents telling them that members of the school's football team had tested positive and that their children may have been exposed as well.

As for the student who took the now-viral photo, Hannah Watters was originally suspended for allegedly breaking school policies when taking the photo. However, following an outpouring of support, Watters said the suspension was dropped.

The state school superintendent also issued a clarification to policies that named no school but said, in part:

"To be very clear, discipline decisions are constitutionally the purview of local boards of education. With that said, I want to encourage our districts and schools to operate with transparency, and to ensure that students and staff are not penalized for expressing their concerns."