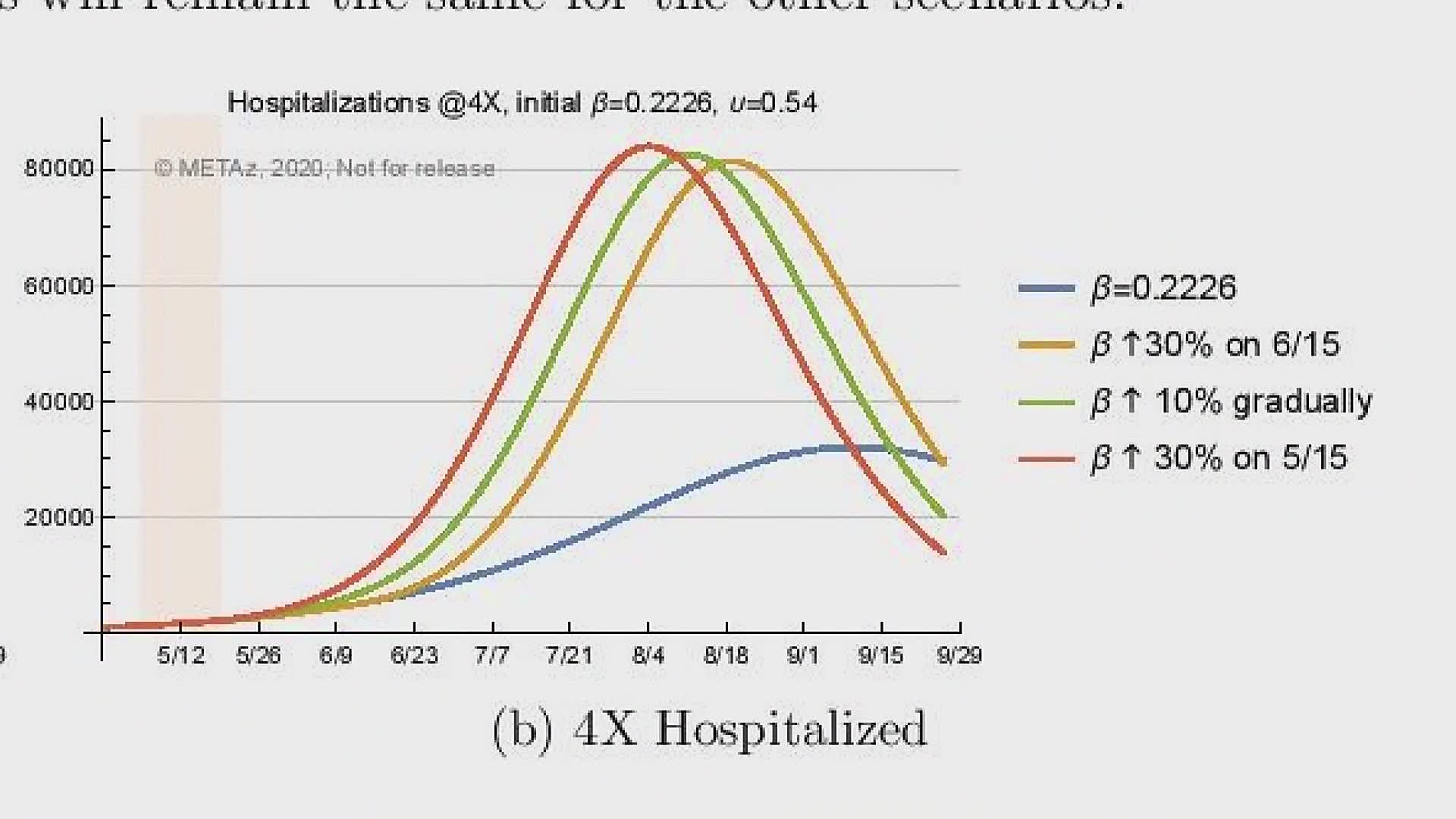 New coronavirus research by an Arizona State University working group projects that infections and hospitalizations could skyrocket over the next three months, barring a pullback by Gov. Doug Ducey.

The key question for the working group: How will Arizonans behave now that the governor’s stay-at-home order has been lifted?

Their research showed even small changes in behavior – seeing more people, going to more places, disregarding precautions like wearing a mask – could dramatically boost the spread of the coronavirus.

“Some people are still behaving ‘fast’ and some people still are behaving ‘slow,’” Tim Lant, a mathematical epidemiologist and a member of the working group, said Monday.

RELATED: ASU report warns that COVID-19 related deaths could rise by thousands if social distancing is lifted too soon

The new research is the first from the ASU group since a public controversy in early May, after Arizona’s Department of Health Services dismissed a team of ASU and University of Arizona experts who had provided pandemic modeling specific to the state.

After critical reports by national and local media, DHS reinstated the team within 48 hours. But it’s unclear whether DHS is relying on the team’s work.

Since late April, DHS Director Dr. Cara Christ has declared her preference for models created by the Federal Emergency Management Agency, as well as other federal agencies and external sources. She hasn’t publicly revealed what those models say, claiming she needs permission from the federal agencies.

The ASU team has posted its new modeling on a web site that invites peer reviews of scientific research.

There were other new developments:

“That means the disease is starting to accelerate,” LaBaer said. “Arizona’s kind of trending up again.”

“In a perfect world with a lot of testing, there would be few new cases...The ‘test blitz’ is uncovering evidence of the spread of the disease.”

- The University of Arizona’s Dr. Joe Gerald, who was a member of the university team that partnered with DHS, posted his own analysis, echoing themes in the ASU research:

Lant describes his group’s model as a tool to help make decisions about managing the spread of the coronavirus.

It’s not a prediction, he says, but a projection that can change, based on whatever measures a community takes.

Here’s just one of the startling projections in the ASU report:

- If Arizona’s pre-May 15 stay-at-home order had remained in place, hospitalizations would be projected to top out at 30,000 in September.

- But under three different reopening scenarios, with escalating community contact, the number of Arizonans in hospital beds is projected to top 80,000 from late June to late August.

“We’re still showing a positive increase in testing and we’re not seeing a significant slowdown in hospitalizations,” Lant said. “That’s what going to contribute to the hospitalizations.”

He added: “There are specific trajectories that could become alarming that would require us to take actions to limit distancing again.”

(One note on the ASU data: It can’t be compared to current DHS data, because it reflects an assumed case spread that’s four times the rate on the state dashboard. “There are a lot of unseen individuals who are infected who are not being seen right now,” LaBaer said.)

The upward trend could be flattened.

Gov. Ducey has talked about monitoring the data during the phased-in reopening, in case adjustments are needed.

“I don’t want to speculate too much what the options are to do that,” Lant said. “You have to come up with something that reduces transmission if we have too much of it.”

The trend might not be clear for another four weeks. Every key indicator – cases, hospitalizations, deaths – lags the one before by two to four weeks.

“It’s an argument for watching closely,” LaBaer said, “and acting quickly if you see a bad trend.”

“If we act early enough we can still limit spread. If we wait too long, then the impact is much worse.” 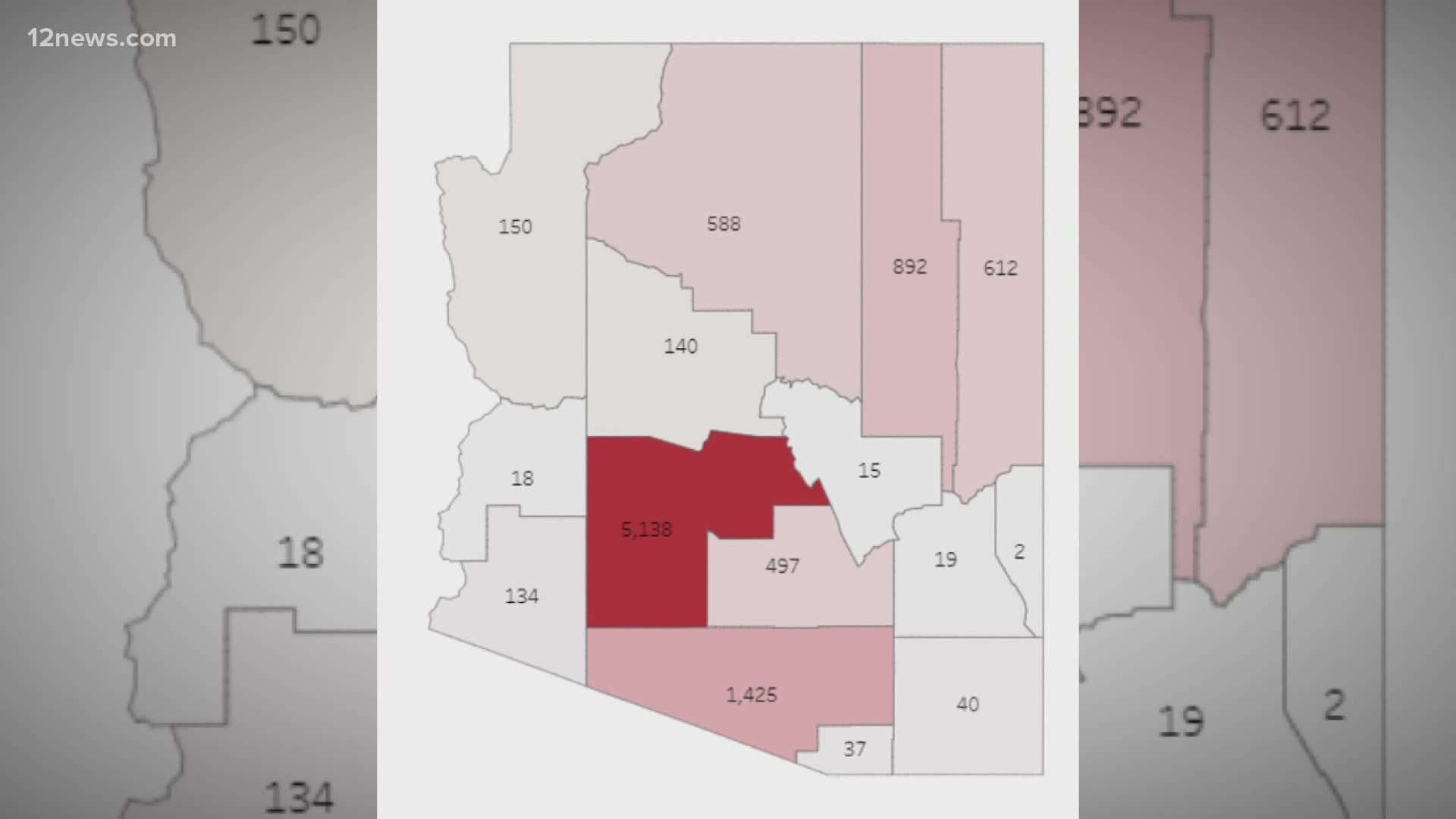