The governor said 19 of the 22 hospital regions in Texas will be allowed to reopen at 75% capacity.

AUSTIN, Texas — Editor's note: The video above was published when KVUE reported on how Texas school nurses are handling the pandemic.

Those businesses and buildings can reopen in the 19 hospital regions where COVID-19 hospitalizations are less than 15% of all hospitalizations, the governor said at a Sept. 17 press briefing regarding the state's response to the coronavirus pandemic.

The 19 regions allowed to reopen at 75% capacity include the following areas:

Three regions will not be allowed to reopen at 75%. All Texas hospital regions and their COVID-19 percentages can be found in the graph below: 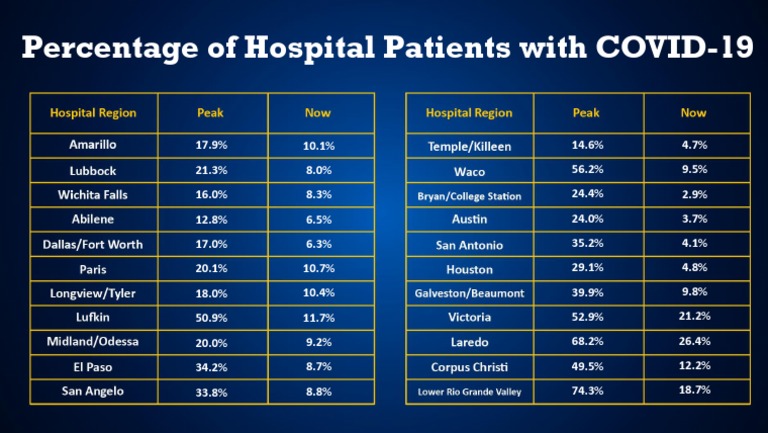 TSA Hospitalizations From Peak Table
This graph shows the percentage of hospital patients with COVID-19 for all 22 Texas hospital regions.

Bars are not included in the list of businesses that can reopen. Texas bars will continue to stay closed as they are "nationally recognized as coronavirus spreading locations," the governor said. However, Gov. Abbott added he is focused on finding ways to get them to reopen.

"We are focused on finding ways to get them open. Some bars and associations have offered some helpful ideas, and we will continue to work with them on that process," Gov. Abbott said.

The openings will begin as early as Monday, Sept. 21.

The governor has also revised nursing home visitation requirements across the state of Texas.

The announcement comes as the list of business closures in Austin and Texas continues to grow since March.

In addition, Gov. Abbott announced hospitals in those regions can return to ordinary elective surgical procedures. All nursing home facilities and assisted living centers are allowed to reopen for visitation. Those facilities will have to follow certain health protocols, the governor added. They additional visitations can begin on Sept. 24.

The governor also announced Texas will see a massive increase in testing.

"Austin’s positivity rate and cases are increasing among students over age 10. Infections among our susceptible populations are still too high. I’m concerned and wish the governor had waited until these numbers were lower. We need to act cautiously with these expanded openings. That means being even more diligent about masking and social distancing. We’ll watch for changes in cases and positivity rates. Let’s keep protecting our ability to open schools and remain vigilant."