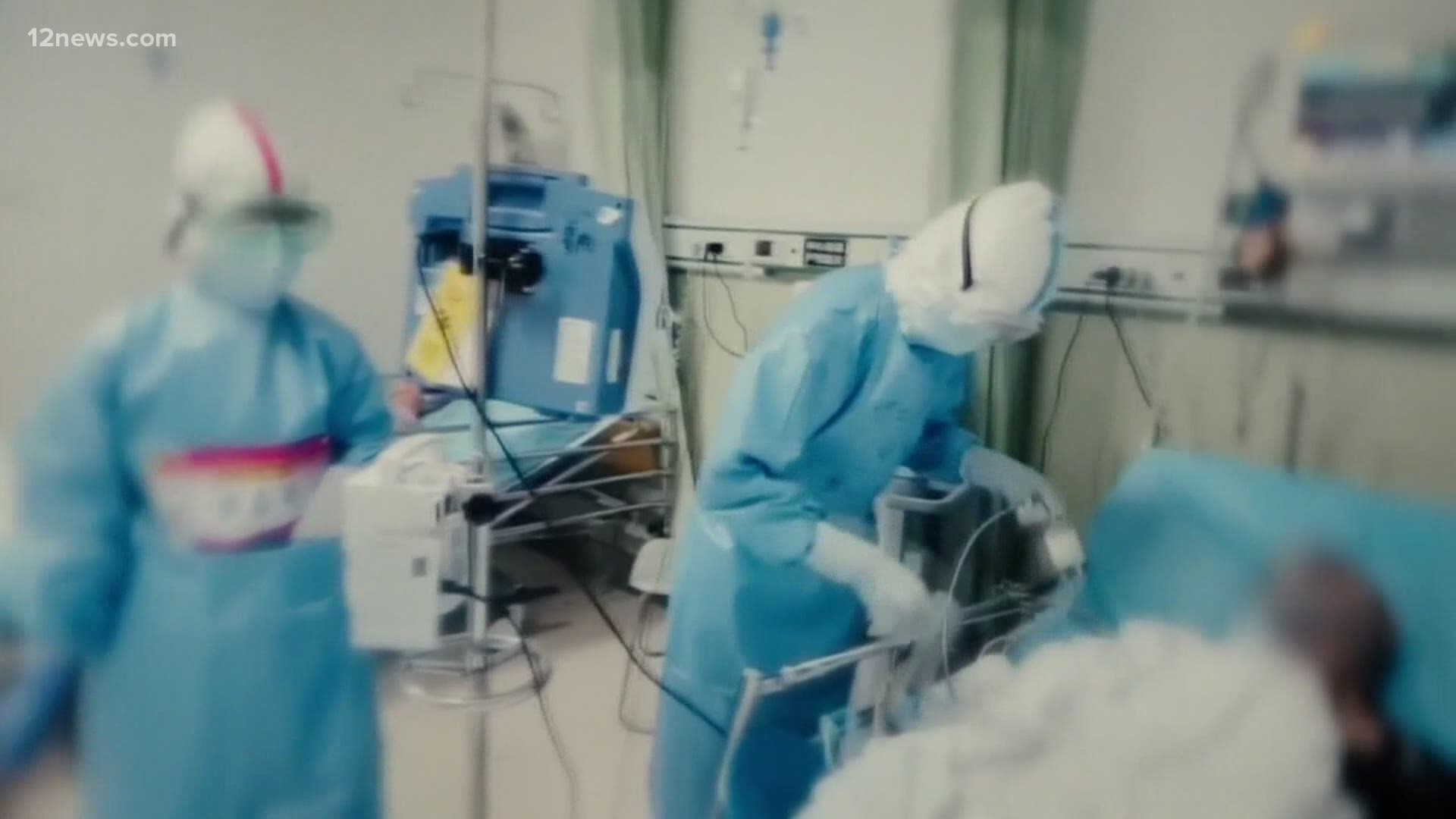 Arizona’s coronavirus surge over the last several weeks is raising new concerns about state hospitals’ ability to care for a rising number of patients.

The state's flashing indicators are getting national attention.

New York Gov. Andrew Cuomo pointed at Arizona Monday as a state that reopened early and is now paying a price.

-Out of Beds By July? A University of Arizona public health expert says the state could run out of hospital beds in a matter of weeks.

“If we continue for the next several weeks like we have the past few, it’s very possible that we’ll run out of capacity in our hospitals and ICUs sometime in early July,” said Joe Gerald, program director for public health policy and management at the University of Arizona’s Zuckerman College of Public Health.

Since Gov. Doug Ducey’s stay-at-home order expired May 15, positive coronavirus cases have soared 110% - more than doubling to 27,678, as of Monday.

Ducey said last week he didn’t see a trend in the rising number of cases. He said cases were climbing because the state was doing more testing.

“The pace of the (COVID-19) spread is accelerating,” said Gerald, who has collaborated in the past on COVID modeling with Arizona State University researchers.

“Arizona reacted early, so we never had a rapid growth in cases. That’s the good news … (but) since mid- to late April, Arizonans have kind of developed quarantine fatigue and have been out and about more.”

Eight of every 10 hospital beds statewide are in use, according to the state Department of Health Services.

The surge in positive cases and hospitalizations confirms projections by an Arizona State University research team almost four weeks ago.

A top aide to Health Services Director Dr. Cara Christ told 12 News the three-page letter was a response to “anecdotal reports” of capacity concerns at hospitals.

The key message: Hospitals might have to curtail or stop elective surgeries if they can’t meet the state’s capacity requirements.

Elective surgeries are a lucrative business for hospitals. They’ve boomed since Gov. Doug Ducey lifted his ban on the procedures on May 1.

The governor kept in place criteria hospitals had to meet to perform the surgeries.

“If you’re not meeting criteria, it’s time to review what’s going on with beds to determine if you’re in compliance … You might have to suspend some or all (elective surgeries) to meet bed availability.”

- Banner warning on beds: Christ’s letter came a day after a warning Friday from Banner Health, Arizona’s largest hospital network, that its intensive-care unit beds were near 100 percent capacity and it was out of specialized equipment for the sickest COVID patients.

“I am concerned that it might happen and we need to do some things to stop that from occurring,” said Dr. Marjorie Bessel, Banner Health’s chief clinical officer.

Banner cares for about half of all COVID patients in Arizona hospitals.

“It should be a red flag - a warning signal we take seriously,” Gerald said. “Given the scope of care they provide, it makes me very nervous.”

A Banner spokeswoman said the company had activated its emergency plan three months ago.

Christ said in an interview Monday that DHS was “surprised” by Banner’s warning it was running out of beds.

“We were surprised because that’s not what our state data was showing,” she said. “Our data shows we’ve got bed availability in ICUs. We’ll be working with Banner on that.”

Banner’s Bessel said the hospital network might have to cut back on surgeries to leave open more beds for COVID patients.

"That has a significant impact for people who are out there that need surgeries for things that are non-COVID related," she told reporters.

"I’m imploring everybody to take action now so we don’t have to have that happen. We want to avoid anybody having to have their necessary surgery be delayed because we’ve exceeded hospital capacity."

- No ICU backup at St. Luke’s: The old St. Luke’s Medical Center east of downtown was being rehabbed by the state at a cost of $4.1 million as a backup for ICU patients.

That’s not the plan anymore.

Christ said potential hospital partners that would run the building said they’d prefer to keep ICU patients at their facilities.

So now St. Luke’s is being viewed as a potential “step-down” facility, offering skilled-nursing care to coronavirus patients after they’re released from the hospital.

The state is reworking its request for proposals from potential operators.

- Where’s Ducey’s mask? There is broad concern in the public health community that Arizonans aren’t heeding their advice: wear masks, social distance and avoid large groups. The No. 1 violator, they say, is Gov. Doug Ducey, the person leading the coronavirus response.

Ducey has been photographed just once wearing a mask, during President Donald Trump’s visit last month to a Honeywell plant in Phoenix.

Last week, Ducey posted images on Twitter of a buffet lunch for about 30 members of his staff, bunched around tables. Just one person was visible with a mask on.

Gerald said the governor should model the response to the coronavirus.

“The governor could provide important leadership just by modeling the behavior he’s asking of others,” Gerald said.

Banner spokeswoman Becky Armendariz said: “We cannot fight this pandemic alone, and we need the community to do its part.”

- Do not leave your home if you are ill except to receive medical care.

- Wear a mask when you’re in public near others.

- Stay six feet away from others.

- Wipe down surfaces that may be infected.

- Avoid gatherings of 10 or more people.