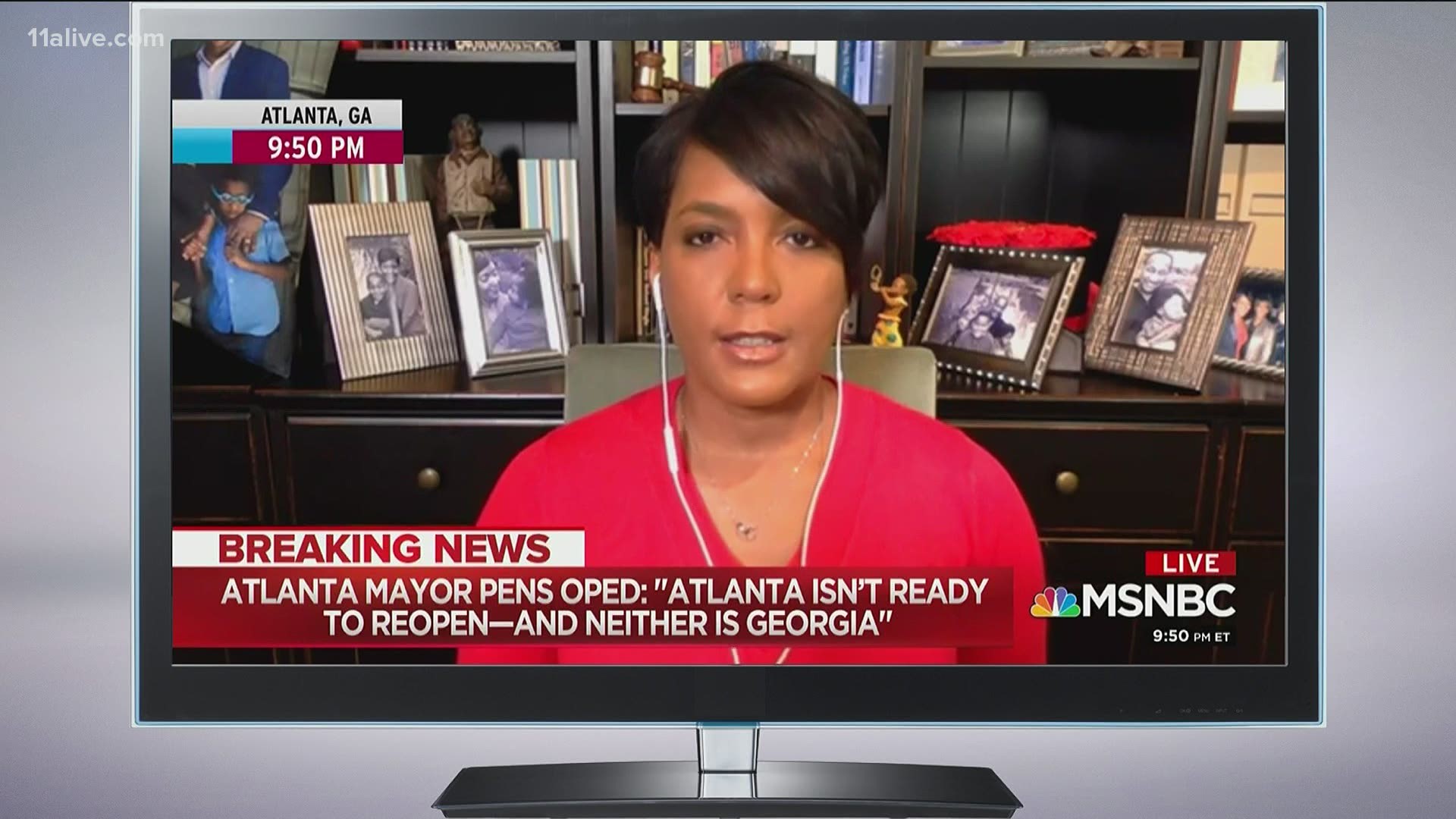 ATLANTA — Atlanta Mayor Keisha Lance Bottoms said Thursday night she was called by Gov. Brian Kemp before he announced Georgia's statewide shelter-in-place would end, but that she "didn't have any input or influence" in the call.

Appearing on "The Rachel Maddow Show" on MSNBC, the mayor said she was "completely dumbfounded that we were one of the last states to close down and yet one of the first states to open up."

Gov. Kemp announced earlier on Thursday that he would extend a public health state of emergency and a shelter-in-place for the medically fragile and elderly until June 12. For all other purposes, most of Georgia will be open after midnight, albeit with a lengthy set of requirements for businesses that wish to operate.

"The governor has said this is about the economy," Mayor Bottoms said on MSNBC. "Unfortunately, the people who will be test case if we’ve gotten it right are people who can least afford to get sick and are more likely to die."

She was asked if she had been consulted before the latest announcement; she was not last week, she has said, when Kemp announced he would begin reopening some businesses, a decision she said left her "perplexed."

Bottoms said she did get a call from the governor this time around, saying they "essentially agreed to disagree on this."

"He did not speak with me before he lifted the first set of restrictions, but I can say we did speak yesterday and we have essentially agreed to disagree on this, and he called today to let us know that he was going to move forward with lifting further restrictions," Bottoms said.

"That has changed since the first restrictions were lifted, that being said, I still didn’t have any input or influence," she continued. "We simply don’t agree on this. I continue to use my voice … to continue to encourage people to stay home."

Bottoms added that realistically, people across the state will likely go back to work because they need money and "our economy is suffering, people are facing economic hardship," she said.

But, she added that this is a time for leaders to step up and "lead our community into recovery," she said.

"Make it easier for people to stay home by making sure small business loans are getting into pockets - not just of people who have well-established banking relationships, but that barber on the corner who may not have as lengthy of a credit history," she said. "We make sure that people have food on their table. These are the things we are doing in Atlanta. These are things we need to be doing statewide, and certainly at a national level."

The financial toll of Covid-19: Beating the virus comes at a cost