ASU study: Yes, you should be wearing a face mask when you go outside

A new study published by a team from ASU's School of Mathematical and Statistical Sciences says face masks could reduce transmission of COVID-19. 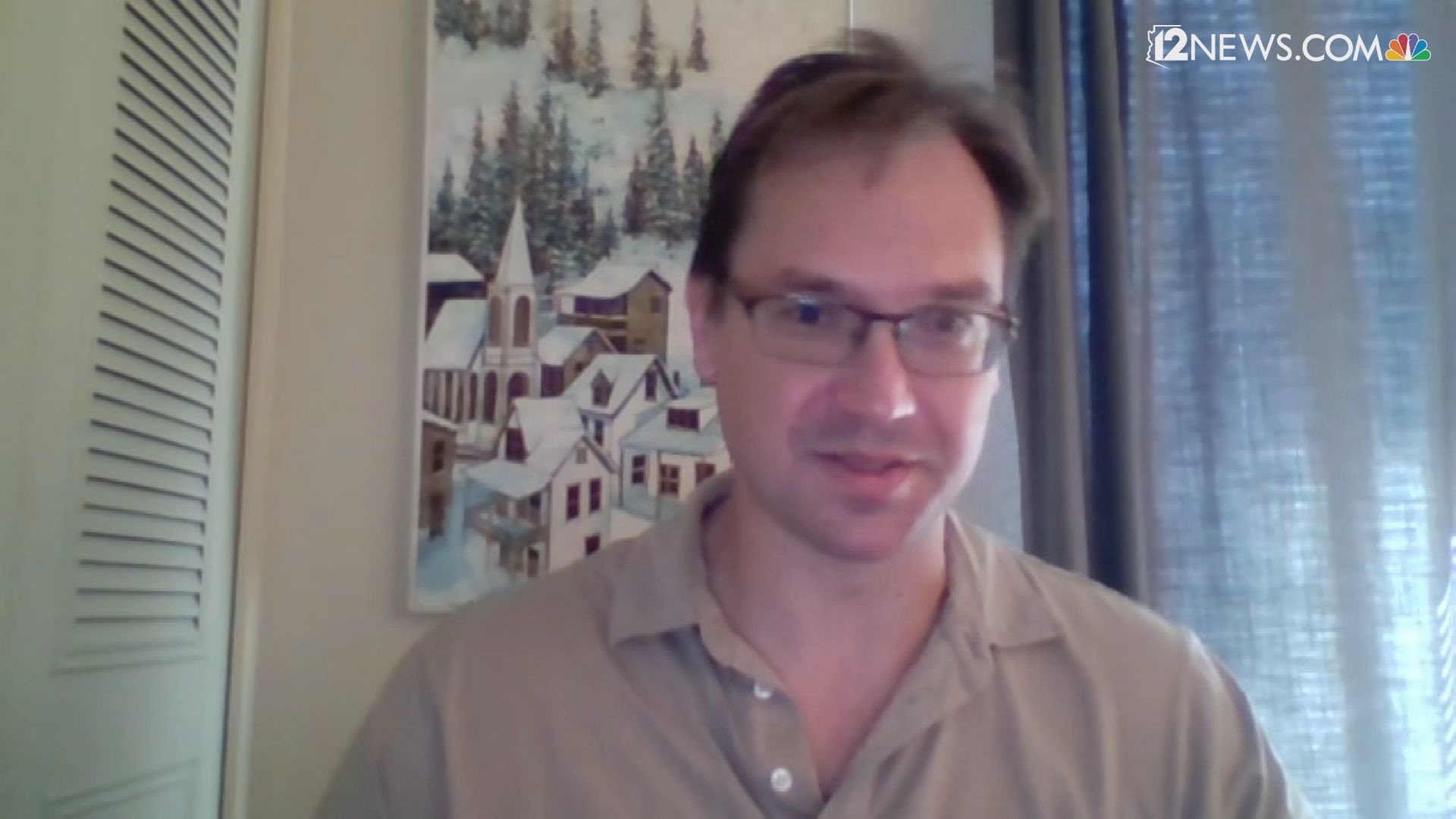 TEMPE, Ariz. — A new study from a team of researchers at Arizona State University's School of Mathematical and Statistical Sciences says that wearing any type of face mask could help reduce the transmission of COVID-19.

The study, which is titled, "To mask or not to mask: Modeling the potential for face mask use by the general public to curtail the COVID-19 pandemic," was published on April 8.

The team was led by Steffen Eikenberry, a post-doctoral Scholar at ASU, who said they used a "susceptible-infected-recovered" framework for the study.

"Basically, some of the population is susceptible to disease, some is infected, and as you recover, you gain immunity," Eikenberry said. "Some fraction of the population will be asymptomatic, some will ultimately be hospitalized and die. And so then we just took that set up and divided it and said, 'OK, the general population is going to be divided into people who habitually wear masks and those who don't habitually wear masks.'

The study specifically took a look at the COVID-19 outbreaks in Washington and New York (two states with widespread COVID-19 outbreaks) to see if the general public wearing face masks would have any effect at bringing down the number of infections, hospitalizations and deaths.

Eikenberry said those two areas were chosen because of when their outbreaks started and how much data was available. When the data came out, it showed that the general public should be wearing masks.

"Basically, the more people, the greater the fraction of people that wear masks, the more effective they are in reducing the total deaths and the peak death rate as well," Eikenberry said.

RELATED: How US guidance on wearing masks during coronavirus outbreak has evolved

The team looked at what would happen if there was widespread adoption of face masks, meaning at least 80% of people would put on a face mask anytime they went outside.

To do this, they needed to know the transmission rate of the virus, which is the number of people that a person with the virus could infect per day that they are contagious. Previous studies about the coronavirus have shown this to be between 0.5 to 1.5 people per day, but the number trends down the longer a person has the virus.

So, the study looked at the models in two ways. One being if the transmission rate remained constant, and the other being that it would vary from patient to patient over time.

For a fixed transmission rate in New York, the models found:

For a fixed transmission rate in Washington, the models found:

For a transmission rate that varies over time in New York, the models found:

For a transmission rate that varies over time in Washington, the models found:

Eikenberry also said that the sooner the general public starts wearing masks when they go outside, the better.

But, with the shortages of personal protective equipment for health care workers around the county, the more effective masks, such as N-95s, should be reserved for those on the front lines, rather than the general public.

"Given the demonstrated efficacy of medical masks in healthcare workers, and their likely superiority over cloth masks in [a 2015 University of New South Wales study] it is clearly essential that healthcare works be prioritized when it comes to the most effective medical mask supply."

For the general public, Eikenberry says that just having a mask, even if it is a homemade cloth mask, will work.

"There's a lot of uncertainty as to exactly how effective different homemade masks are," Eikenberry said. "Even if they're only, say, 20% effective at the low end of what is reasonable to assume, if most of the population is wearing them, they can still actually have a very large effect on the total number of cases (and the) total number of deaths."

Eikenberry added that wearing face masks is not the solution to the pandemic and should be combined with other preventative measures.

"It works best when social distancing things like this have been implemented and are, you know, are being observed," Eikenberry said "When you already have people social distancing, and doing things that are reducing this contact rate, if you add this in, it has a fairly large effect, compared to if people aren't doing these other things. So it actually has kind of a multiplier effect with these other measures to help you bend this curve down."

You can read the full study below.