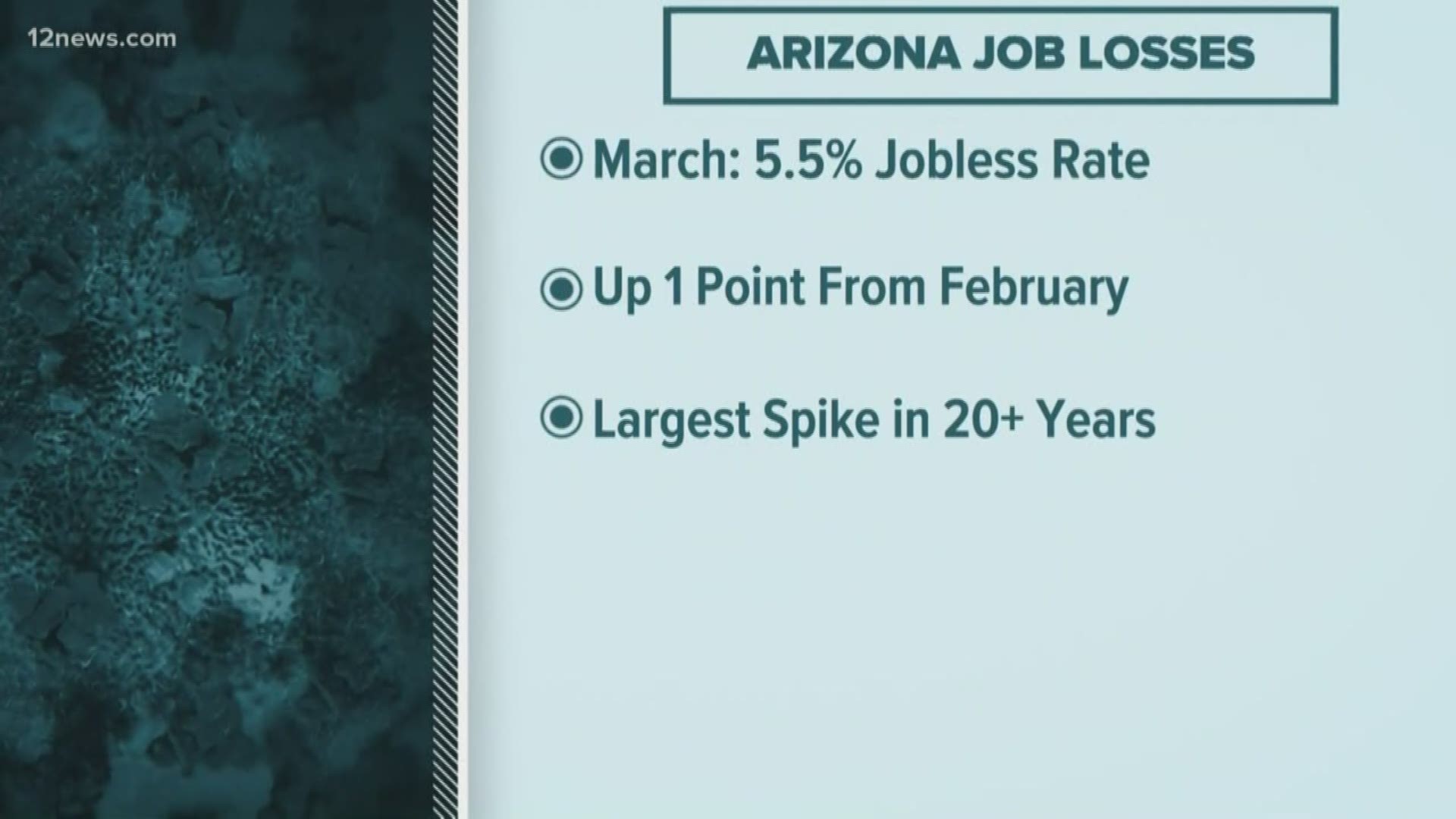 Editor's note: The above video is from an April 6 broadcast

Arizona’s unemployment rate increased to 5.5 percent in March, from 4.5 percent the month before, but the data doesn’t account for the tens of thousands of jobs eliminated in the second half of the month by coronavirus restrictions, the Arizona Office of Economic Opportunity reported Thursday.

Other takeaways from the report:

-The 1 percentage-point jump in the state jobless rate is the sharpest monthly increase in at least the last two decades.

-Women in Arizona are bearing the brunt of the job losses since March, according to a breakdown of jobless claims for the three weeks from  March 21 through April 4.

Female workers accounted for 57 percent of all new claims; they represent 48 percent of the workforce.

-Why are so many women losing their jobs? They represent a large share of the workers in the hardest hit industries. The hospitality industry - hotels and restaurants - has suffered the heaviest losses, shedding more than 40,000 employees, or about 14 percent of its workforce.

The Arizona unemployment report surveyed the week of March 8 through 14, before the massive job losses resulting from school and business closures. The report shows a net 7,400 jobs were lost from the month before.

“It’s not going to reflect all of the employment impact,” labor market analyst Doug Walls said during a teleconference with reporters.

“We are not able to determine what the actual rate might be.”

The same data-gathering issue affected the reported U.S. jobless rate for March. It jumped to 4.4 percent, from 3.5 percent in February.

But the numbers were based on a week that ended March 15, too soon to account for millions of layoffs and furloughs that have decimated the workforce.

Experts believe the current U.S. jobless rate is in the range of 12 to 15 percent.

During the Great Recession, Arizona’s unemployment rate peaked at 10.9 percent in January 2010.

Also Thursday, 5.2 million Americans filed first-time claims for unemployment benefits in the week before, for a four-week total of 22 million.

The four-week totals for jobless claims in the U.S. and Arizona have shattered previous records.

Arizona’s March number doesn’t reflect the job losses during the entire month. About 120,000 claims for unemployment benefits were filed last month by Arizonans who lost their jobs.

Job losses in April are already almost double the cuts in March.

Through the first two weeks of this month, an additional 230,000 first-time claims have been filed. Putting the two months together, 1 in 10 Arizonans have lost their jobs in just four weeks.

Gov. Doug Ducey is talking to business leaders about steps to reopen the economy on May 1.

President Donald Trump is expected to provide his guidelines to governors loosening coronavirus restrictions during a 3 p.m. news conference Thursday.