Report provides scenarios and projections from total number of people infected to patients needing ventilators as well as potential deaths from limited mitigation. 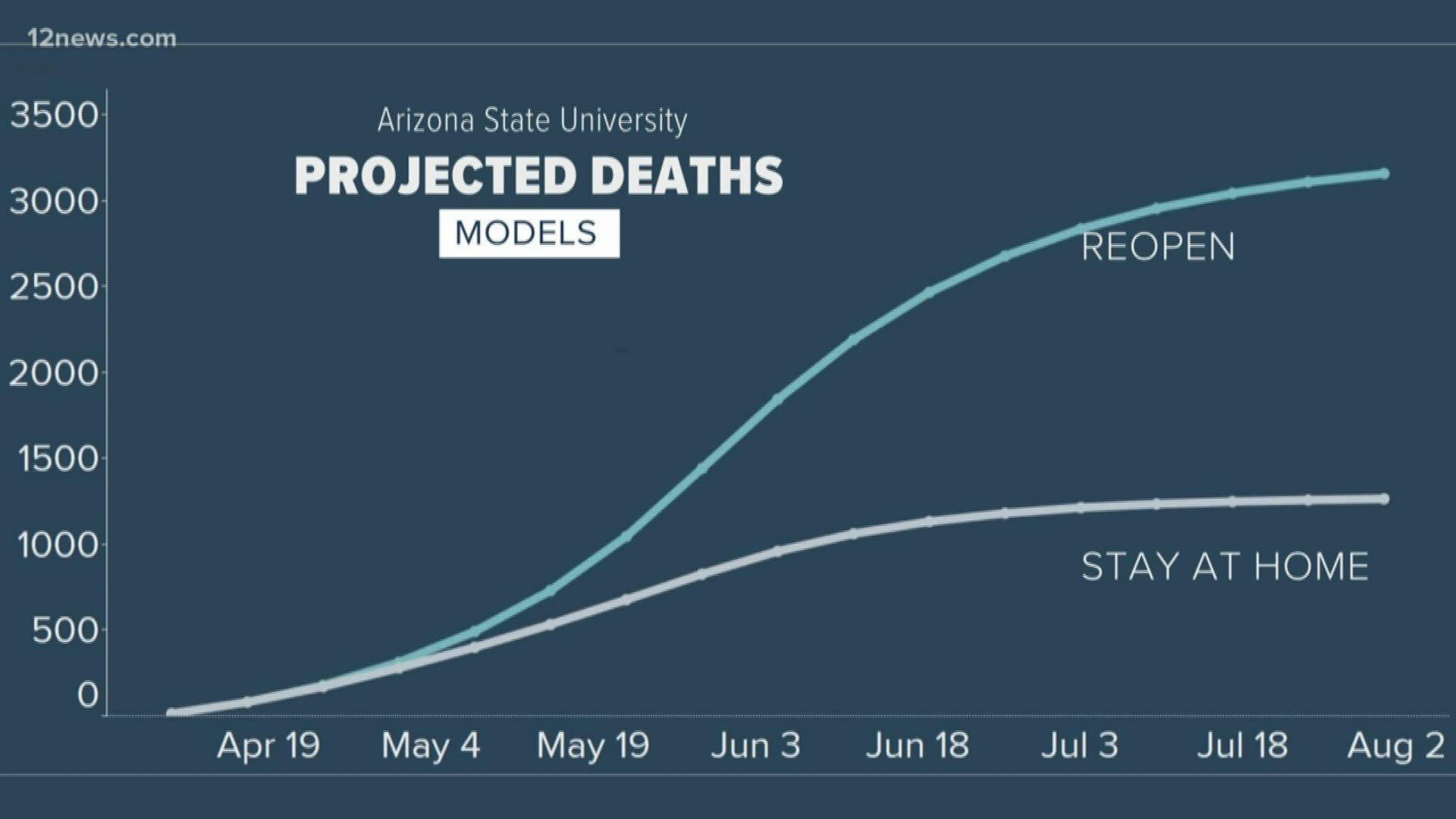 PHOENIX — A week away from the end of Governor Doug Ducey's stay-at-home order, there are still several unanswered questions about which models the state is considering for reopening Arizona.

The Arizona Department of Health Services is prioritizing the ability for the state's healthcare system to respond, reviewing specific modeling related to the anticipated hospital bed and ventilator projections.

ADHS says they did review the projections of deaths during the initial review of the draft models from the universities, but they are aware of additional models projecting deaths including the IHME model and CDC forecasting.

Arizona State University released a study on Scenarios and Projections for COVID-19 in Arizona prepared for Arizona Department of Health Services. It's a Modeling Working Group. This study is the second report and updates the current epidemiology in Arizona and provides updated estimates of future cases as of April 20.

This report provides the state with five scenarios and a range of projections from the total number of people infected with the virus to the number of patients needing a ventilator. But the sobering takeaway is the potential for thousands to die by the end of July if social distancing or "mitigation" changes too soon.

“As we go through the model, we are very focused on Arizona the models increasingly going to be able to inform decisions about whether or not we meet the criteria to open up at Maricopa county,” said Director of Program Development at Arizona State University, Dr. Timothy Lant.

All scenarios consider what Dr. Lant calls the "summer effect," which is specific to Arizona and is organic social distancing from the often hot temperatures over the summer months.

Here are the scenarios:

3. Best fit: Assumes undetected cases are 4X known cases and can transmit asymptomatically. Summer effect is modeled on May 15.  Assumes no additional mitigation, but high compliance with current social distancing orders. This scenario is the current best fit to the data.

The peak in hospitalizations will hit around mid-May, according to our model, which is dependent on summer effects originating around May 15.

“As we go through the model we are very focused on Arizona, the models increasingly going to be able to inform decisions about whether or not we meet the criteria to open up at Maricopa County."

"There’s still some scientific uncertainty around testing and around increasing affects overtime due to due to climate. So, we have scenarios that outline each one of those that we think are potential and as we start to get closer to some of the scenarios, we have will understand why we’re doing that,” said Dr. Lant.

The ASU report looks at projected COVID-19 deaths from April 8 through the end of July.

"We identify scenarios that have increased transmission due to a large number of unidentified individuals and/or have a higher rate of transmission that can sustain community spread. These estimates are conditionally predictive – meaning that if events unfold according to the assumptions of the model, they are plausible outcomes based on the known science," the report says.

"Reopening too soon would mean allowing people to go back to a situation where they're in contact with each other and the disease starts to spread significantly enough that it starts to put a strain on the healthcare system in hospitals,” said Dr. Lant.

RELATED: Arizona gets 1st peek at data used to make COVID decisions. But a lot's left out

MORE: How could reopening Arizona look?