The 7-day moving average of daily cases decreased by 75% from July 13 to Aug. 7, around the time when mask wearing was widely enforced, the study reported.

ARIZONA, USA — The average number of daily coronavirus cases in Arizona dropped by 75% after mask-wearing became widely enforced, a new study by the CDC reported.

The study measured the number of cases reported by the Arizona Department of Health Services.

The study showed a drastic drop in cases that happened between July 13 and Aug. 7, not long after preventative measures were put into practice by businesses, communities and individuals.

The study found that after state officials provided local governments with updated guidance and gave them the authority to implement mask policies on June 17, which reportedly affected 85% of Arizona's total population, cases began to see a decrease.

Specifically, the 7-day moving average of daily cases peaked from June 29 to July 2, stabilized during July 3 to 12, and subsequently decreased 75% from July 13 to Aug. 7.

The report also found that coronavirus cases increased 151% from June 1 to June 15, after the state-wide stay-at-home order ended on May 15.

"Mitigation measures, including mask mandates, that are implemented and enforced statewide appear to have been effective in decreasing the spread of COVID-19 in Arizona," the CDC study stated in its discussion section.

The report said that decreases in daily COVID-19 cases in Arizona were also observed after widespread sustained community mitigation measures that promoted social distancing, limited large gatherings, and paused operations of businesses where mask use and social distancing were difficult to maintain.

"Enhanced mitigation measures should be implemented by communities and persons to slow COVID-19 spread, particularly before a vaccine or therapeutic treatment becomes widely available," the CDC study said.

This week, Arizona has seen a rise in new COVID-19 cases which Gov. Doug Ducey said he expected as the state ramps up testing.

“The expectation should be that cases are going to rise,” Ducey said Thursday.

Valley Physician Dr. Natasha Bhuyan said the rise could be due to public fatigue and people congregating either at work or in schools.

Since returning to class, Cactus Shadows High School has had six students test positive for COVID-19 which forced 100 students to go into quarantine.

“You know our largest classrooms some of them have 35-36 students in them. You cannot socially distance in a classroom like that,” said co-president of the Cave Creek Education Association Cadi Angeli.

“It is absolutely a battle that were in right now to make sure our kids are working with us and trying to stay safe on campus.”

“As Arizonans we were able to decrease our cases and we did that together. I know we can do that again, but we have to take it seriously.”

Bhuyan thinks about battling COVID-19 in terms of the "Swiss Cheese Model." The model focuses on a collection of actions taken to prevent the spread of the virus.

Bhuyan said she wishes there was more evidence-based research as to why cases are beginning to rise in the state.

12 News reached out to the Arizona Department of Health Services to discuss the CDC report, but they respectfully declined even though one of the authors of the report said they would be willing to go on record.

You can read the full CDC study here. 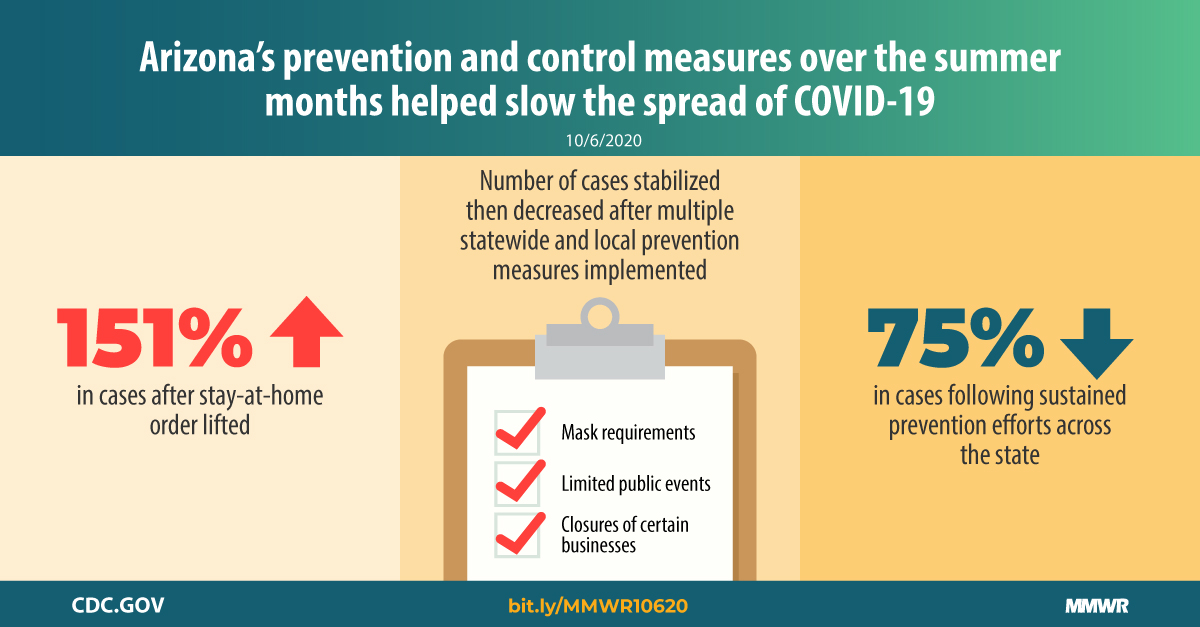