Procedures replacing human bones with 3D printed ones have been performed a few times on the East Coast but never in Arizona or anywhere in the western U.S. 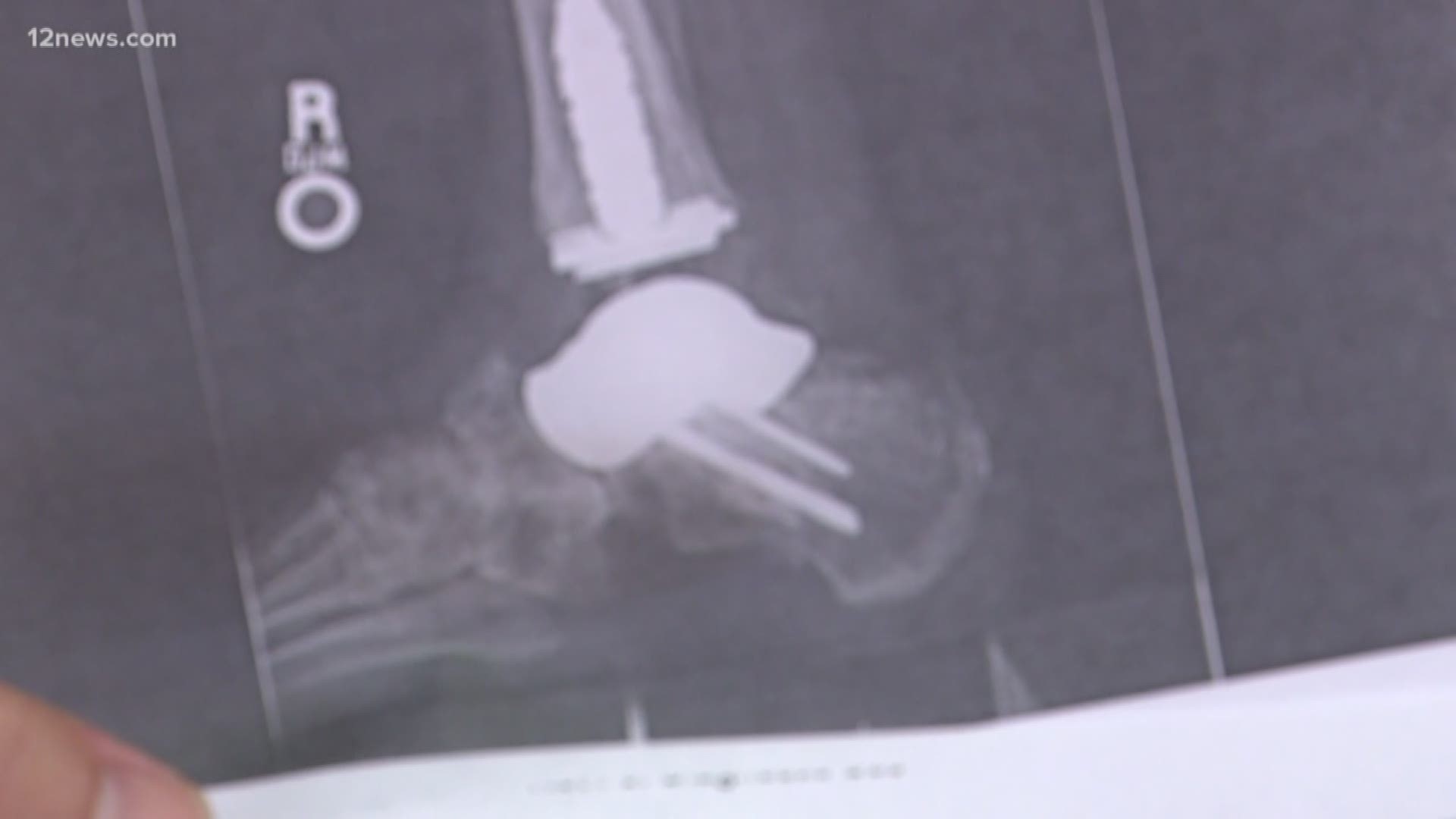 PHOENIX — A first for medical technology in Arizona, a Mesa man received a new ankle created on a 3D printer.

Elliot Munro had battled cancer all his life. From the age of 11, Munro had taken medications as part of the fight against cancer. He first noticed the side effects of the medicine on his bones in his mid-twenties: intolerable pain in his ankles.

Elliot Munro was diagnosed with osteonecrosis, a disease that breaks down the bone faster than the body can repair it.

Fast forward to October of 2018. The pain in his right ankle was more than he could bear. His doctors told him amputation was the only remedy.

That’s when Munro met with Dr. Jeff Holmes of Banner Boswell Medical Center. Dr. Holmes had been made aware of a new procedure that Munro was a perfect candidate for.

“In my mind, there was no other option,” Dr. Holmes explained. “The only other option was amputation.”

Amputation was not an option for Munro. He wanted desperately to keep his foot and play with his young children. Knowing that if the surgery failed, the result would be the loss of his foot, he felt he had nothing to lose by trying.

“This was my last chance at having a leg,” Munro recalled.

After a series of scans, the results were sent to a company that used the information to create a few options for the surgeons to use. The bone was created using measurements of Munro’s other ankle.

In it’s simplest form, the surgery would be a two-step process. The first step was removing Munro’s old, decaying Talus bone in his ankle: the part of the ankle that connects to the tibia and fibula of the lower leg.

The next step was a little more common for Dr. Holmes, attaching the new bone to the existing heel and leg bones. This is a common step in ankle replacement surgeries, something Dr. Holmes estimates he performs once a week.

The procedure using a 3D printed bone has been performed a few times on the Eastern Seaboard, but never in Arizona or anywhere in the western United States. The risk of this procedure is the unknown; there is a lack of studies to determine how this kind of replacement will hold up in the long term. It was a risk Munro and Dr. Holmes felt was worth taking.

“For me, with Elliot, I couldn’t wait that long and wait for these big studies to come out,” Dr. Holmes said, explaining the risks of the surgery. “To me, the long-term outcome for this is better, right now, than an amputation.”

Most insurance companies might view the procedure as being too new, too risky. That is a concern that Elliot Munro hopes to address.

“It’s just been a Godsend as far as technology that’s out there that very few people know about,” Munro said. “We want the world to know about this because there’s just a better solution out there and we should be using it.”

Munro says in the short-term, using 3D printed ankle bones might be more expensive than amputation, which is typically covered by most insurance providers. In the long-term, however, Munro says the cost of therapy, prosthetics and follow-up surgeries make amputation more expensive.

It’s a procedure, according to Munro, that can save insurance providers money in the long run.

While one surgery may not influence insurance and hospital decision-makers, as Munro walks pain-free out of his follow-up appointment with Dr. Holmes, he knows it’s an important first step.