Employees received an email saying they were receiving a holiday bonus. It turns out, it was just a test sent out by the company. 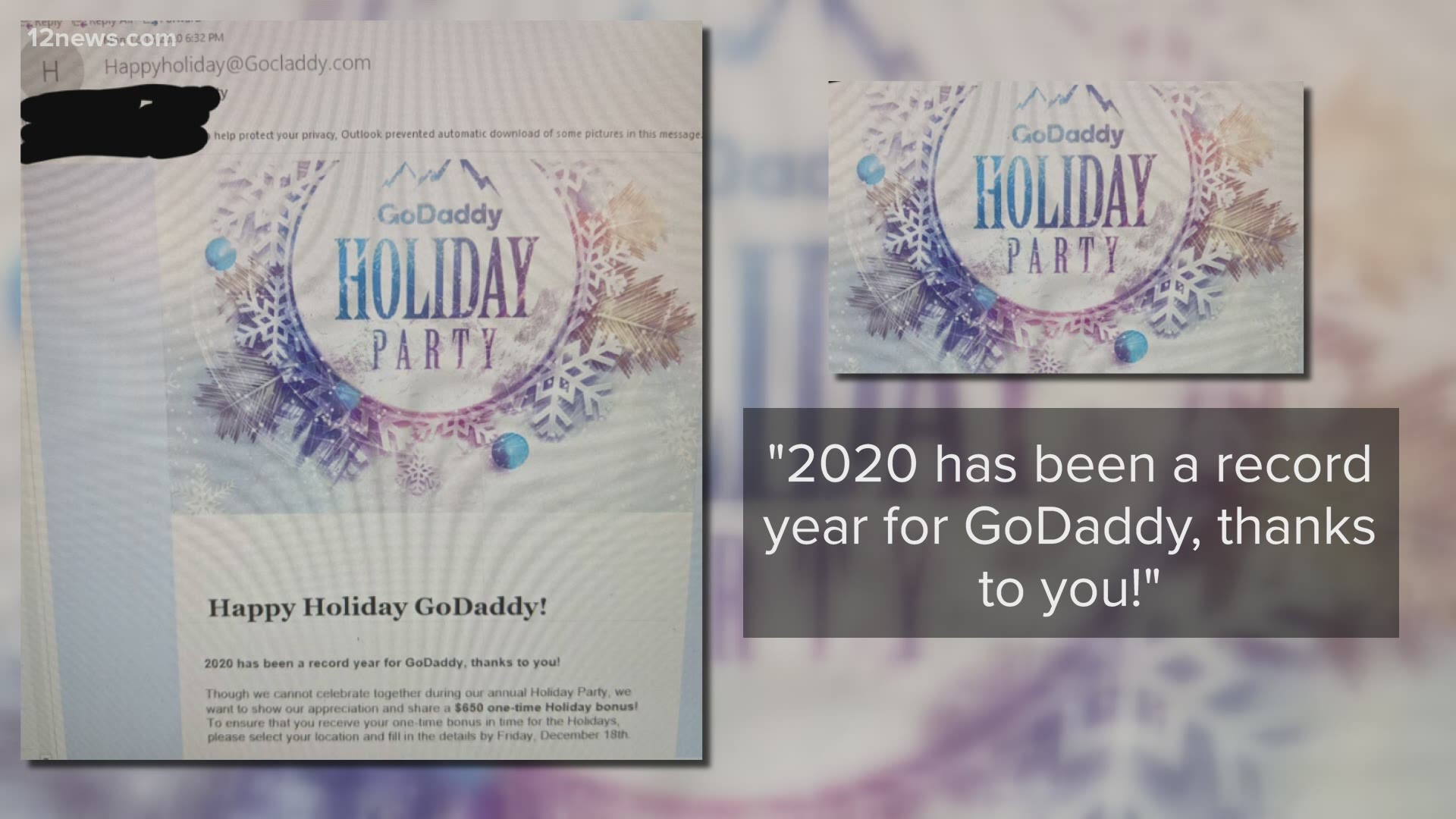 SCOTTSDALE, Ariz. — The company GoDaddy is facing backlash after employees received an email saying they were getting a holiday bonus, but it turned out to be a hoax set up by the company to test employees.

The email sent out on Dec. 14 came after employees had already been notified by the Scottsdale-based domain company that they would not be giving out holiday bonuses this year.

12 News obtained a copy of the email. It said:

"Happy Holiday GoDaddy! 2020 has been a record year for GoDaddy, thanks to you!

Though we cannot celebrate together during our annual Holiday Party, we want to show our appreciation and share a $650 one-time Holiday bonus! To ensure that you receive your one-time bonus in time for the Holidays, please select your location and fill in the details by Friday, December 18th."

The email featured a large logo at the top that said "GoDaddy Holiday Party."

The email was not true. It was intentionally sent out by the company to test employees to see if they would fall for a phishing scam.

“The line level employees in a company have always kind of been the prime targets for hackers," said Ken Colburn of Data Doctors.

Colburn tells 12 News it is important for businesses to conduct these types of tests, especially a company like GoDaddy. GoDaddy has fallen victim to data breaches and scams within the past year.

"Getting them to be really much more suspicious, that's an important task. But doing it in a way that's not going to upset the employees is equally as important," Colburn said.

The controversial email was sent out months after GoDaddy's CEO Aman Bhutani announced company-wide layoffs that impacted employees across the country including in Arizona.

Days after the email was sent out, the company hosted a town hall. Employees tell 12 News that many anonymously voiced their frustrations with the test which they described as tone deaf.

This isn't the first time a company has come under fire for issuing a controversial phishing scam test.

In September, Tribune Publishing issued a similar test that dangled a bonus in front of employees. Tribune had previously shut down newsrooms, furloughed employees and enacted pay cuts.

Tribune employees were furious and took to social media, demanding those responsible be fired. The company later apologized and called the email "misleading and insensitive."

12 News has reached out to GoDaddy for comment. So far, we have not heard back.