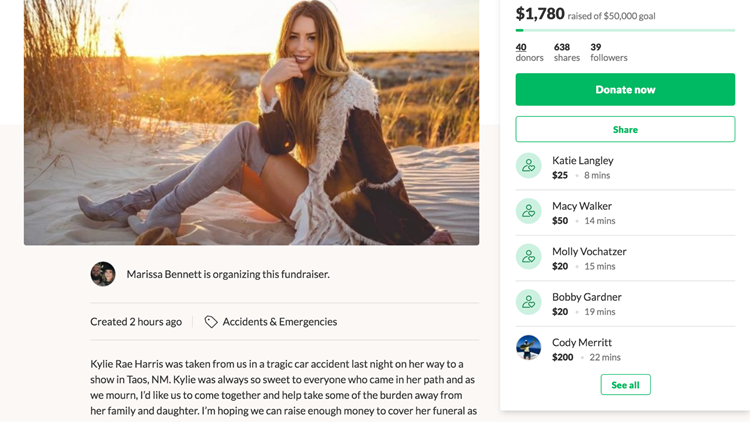 Harris was on her way to perform Thursday in the Michael Hearne’s Big Barn Dance Music Festival in Taos, N.M.

Taos County authorities confirmed two drivers — a 30-year-old woman and a 16-year-old girl — were killed. A third driver was uninjured in the Wednesday night crash on State Road 522.

Prior to the deadly crash, Harris posted on Twitter saying they were low on fuel.

A GoFundMe has been created to help raise money for funeral expenses and money for Harris' daughter's college fund. To donate click here.

Billboard released the following statement on its website Thursday:

“We are heartbroken to confirm that Kylie Rae Harris passed away in a car accident last night,” Harris’ publicist says in a statement to Billboard. “We have no further details to share, and ask for privacy for her family at this time. Everyone that knew Kylie knew how much she loved her family and, beyond that, how much she loved music. The best tribute to her unmatched enthusiasm for both is to spread as much love as you can today, and listen to music that fully inspires you.”

Country music artists also shared their condolences after hearing about the deadly crash.