Many speakers on both sides alluded to a question: Are SRO’s effective? 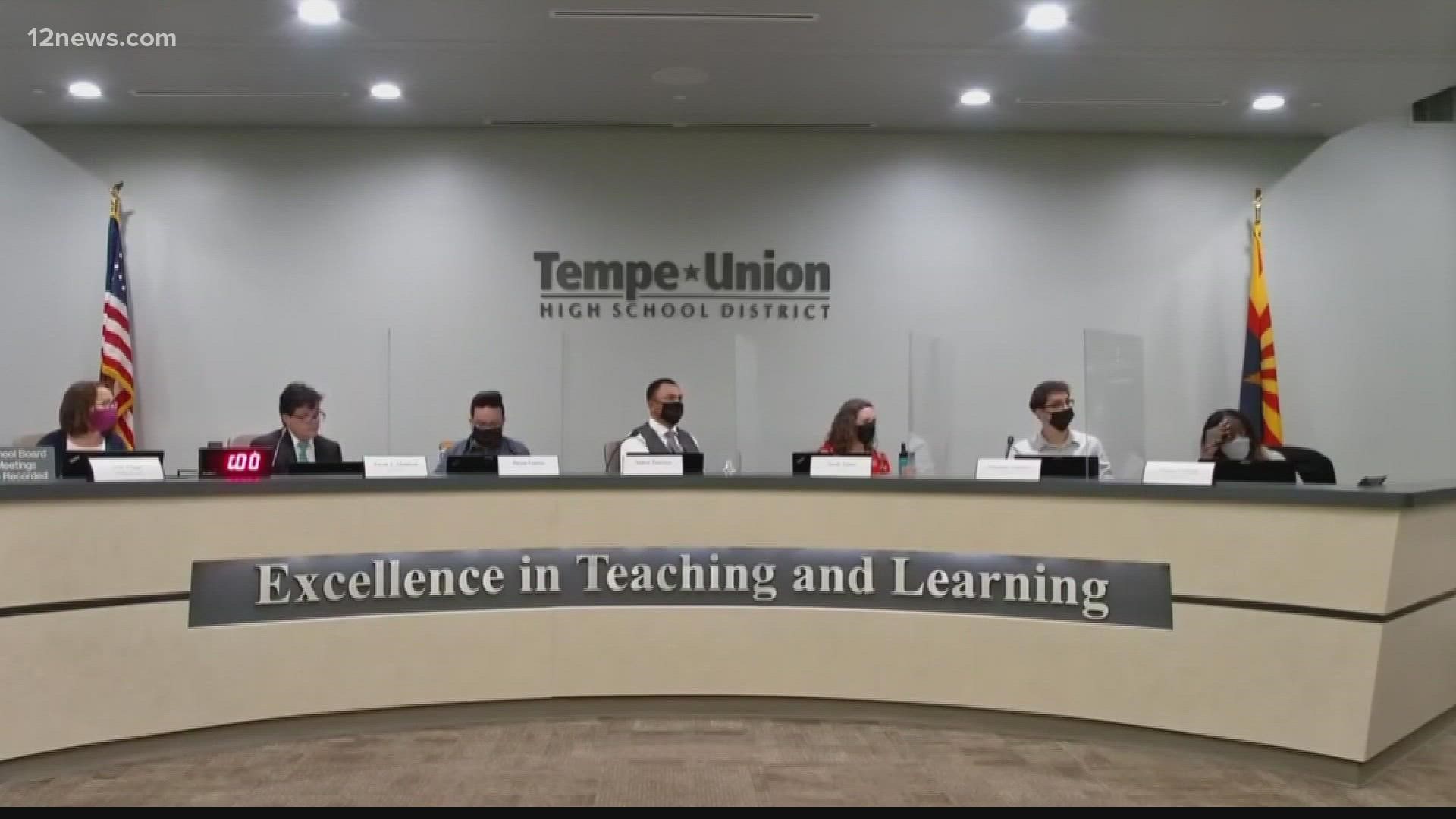 The district’s governing board decided in a 3-2 vote that the district will be developing a new school safety plan that does not include having officers on campus.

The district’s governing board said during their meeting Wednesday night they had over 40 speakers signed up to address the board regarding the topic on both sides of the issue.

“If they’re really, truly thinking about our kids they’ll put that funding towards their education, towards more counselors, towards other safety practices,” Pollett said.

Pollett said she was happy to see the resolution pass.

“Kids need to feel secure emotionally. And feel those adults around them are really there for their social and emotional well-being and not just their physical well-being,” Pollett said.

Several students in the district spoke as well, saying they wanted to see more counselors on their campuses and not SROs.

Principals of the Tempe Union’s high schools shared their minute of comment together, saying they wanted to keep the officers on campus for safety.

RELATED: Valley schools warn students not to do TikTok challenge that pushes them to steal

Tempe Police Chief Jeff Glover also attended the meeting and spoke to the board.

“We just want to make sure we’re keeping everyone safe,” Glover said.

Glover said his top concern for the schools is safety and security.

“When you have somebody stationed there, they have the ability to address issues very quickly,” Glover said. “Now we won’t have that ability. It doesn’t mean you don’t get good service, it means the service model changes.”

In response to people bringing concerns to the board regarding the presence of SROs on campus and how it impacts students’ mental health Glover said the SROs assigned in Tempe often have a passion for helping students.

“They’re not seeing the genuine interactions our school resource officers are having with many of the students I mean they’re impacting lives in a positive way,” Glover said. “Again, they’re not there for punitive reasons. They’re there to be able to create and build relationships and mentor.”

Many speakers on both sides alluded to a question: Are SROs effective?

Weiler has studied the issue of if SROs are effective. Weiler said from his research, SRO’s can be if they are given the right training, have the right temperament, and have good guidelines in the memorandum of understanding between the district or school and law enforcement.

“The current model of the SRO does overall positively contribute to the sense of a safe learning environment. However, there are situations where because of the actions of the SRO schools don’t feel safe for students,” Weiler said. “Unfortunately it’s typically marginalized students that are disproportionately victimized.

In the best of situations, Weiler said the SRO can not only provide increased safety but help in other ways on campus.

“That individual is able to serve as not only a law enforcement agent in the school building, but also as a counselor and a teacher and really do a lot of things to support children as they mature,” Weiler said.

Weiler acknowledges there have been ‘countless examples’ of challenges with SRO’s, but said there is much good they do, specifically around school safety.

“If a school district were to say, “We’re going to phase out school resource officers.’ My first question would be, ‘What are you going to replace the school safety side of school governments with?” Weiler said.

Tempe police have had SROs on Tempe campuses since 1994. The board decided to extend their agreement with Tempe Police for one more year. Typically the contract is a two-year deal.

The year agreement meets the deadline of the district implementing a new school safety plan by August 2022 that will not include SROs.

“I hope they will look at it and reconvene and give it a lot more consideration as to what they do moving forward,” Glover said.

The board also voted on whether to extend the SRO agreement with the City of Phoenix. However, it was a 2-2 tie with one abstention, so it did not pass.

“Tempe Union places tremendous value on our relationship with our community partners, including our decades-long partnerships with the City of Tempe and City of Phoenix,” a spokesperson for the district said in part of a statement to 12 News. “The conversation around policing and SROs on school campuses is an important one, and we look forward to engaging our entire community of stakeholders on this important topic in the weeks and months ahead while also remaining focused on campus safety.”

Pollett believing students will be safe with the measures in place, hoping the money will be used elsewhere to benefit students.

“It’s also important for the students’ peace of mind,” Pollett said. “I mean, we really need to listen to what these kids are saying.”