We tried to verify a claim by Gov. Doug Ducey that public school district leaders should be able to find ways to provide teachers up to a $10,000 raise next year. 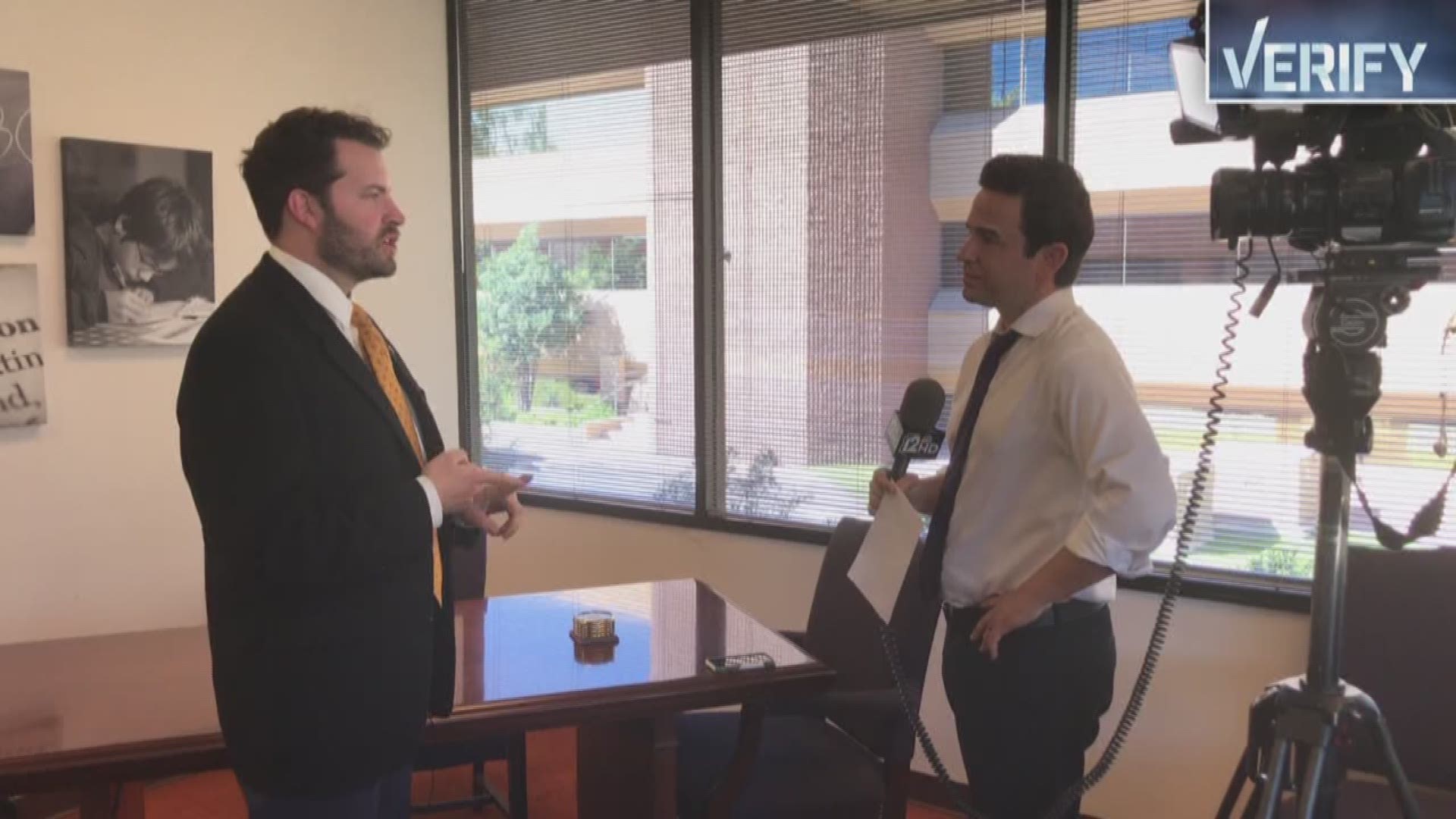 There does not appear to be evidence to support a claim made by Arizona Gov. Doug Ducey regarding public school teacher raises. A 12 News "Verify" report has determined Ducey's claim to be false.

As 12 News previously reported, Ducey said last month that a combination of existing funds and his proposed budget should allow public school district leaders to allocate raises amounting up to $10,000 for teachers.

"If you take all of this money combined, there is the potential for a $10,000 raise for each of our teachers,” Ducey said. “Now, our schools have needs in addition to that, but there are dollars there to see our teachers get raises. That's left to our principals and superintendents to do it."

A spokesperson for Ducey did not provide any data or statistics. Ducey's Senior Press Secretary Patrick Ptak  released a statement that re-iterated the governor's position that "he'd like to see district superintendents focus on teachers, first, when determining how to allocate new dollars they receive either from the state or from local taxpayers."

The two school officials interviewed for this report said Ducey's projection was unrealistic and did not reflect the growing expenses that school districts around the state face.

"We appreciate the governor's efforts to put more dollars into education in his budget," said Chris Kotterman, director of governmental relations at the Arizona Schools Boards Association.

"When you talk about the possibility of a $10,000 raise, it would have to be a very specific targeted group. It would not be available to all teachers. It would have to be a teacher in a top-10-percent achieving district, who receives a signing bonus, for example. It might be great for that targeted group. But we have a statewide problem and we need a statewide solution."

12 News also interviewed Ken Hicks, president of the Arizona Association of School Business Officials and was chosen by Ducey to serve on the governor's "Classrooms First" council created in 2014. Hicks is also finance chief of the Peoria Unified School District.

The district is projected to receive less than half that amount -- nearly $10 million this year from Prop 123 and inflation adjustments. Hicks said a more realistic projection for teacher raises in his district for the 2017-18 school year is roughly a 1 percent salary increase, though the district's budget committee has not made a recommendation yet to the school board.

Hicks said the problem facing his district and others across the state is they must shoulder new expenses that have nothing to do with teacher salaries. Those added expenses relate to higher utility rates, non-teacher minimum wage increases, employee benefit costs, technology and infrastructure, he said.

"Therese are competing interests that all compete for the same dollars (as teacher raises)," Hicks said. "We haven't received enough funds for a $10,000 raise ... We're not there but I do think there is opportunity to get there. We are on the way. We are drawing more attention to get those funds."

HIcks said he was encouraged to hear Gov. Ducey recently say he was interested in extending the Prop 301 sales tax.

The Prop 301 sales tax expires in 2021. It currently brings in about $600 million annually for the education budget, according to The Arizona Republic.