Education leaders say the "fight continues" and they will now work on a ballot proposition for November. 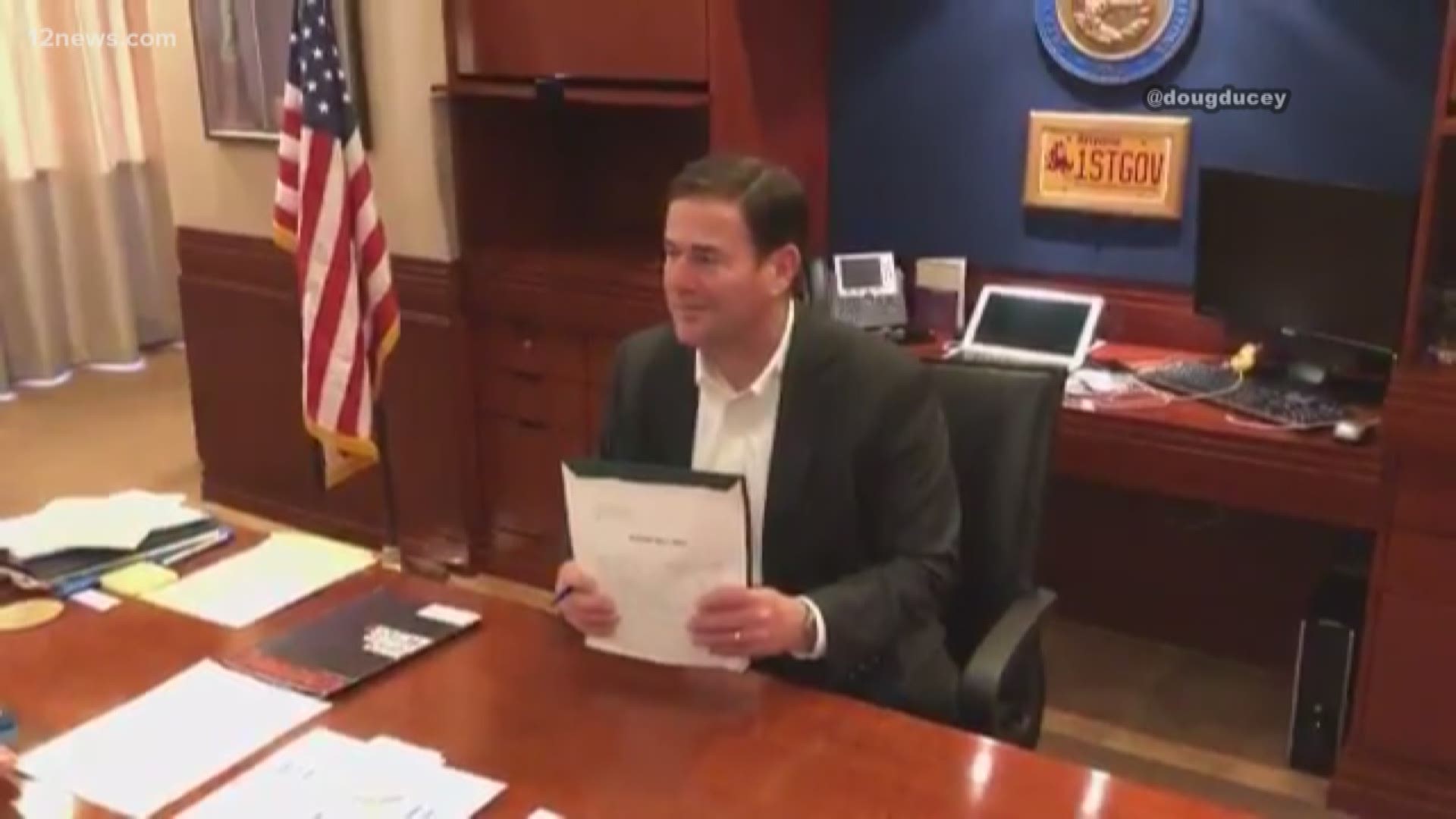 PHOENIX - On day six of the teacher walkout, the Arizona House of Representatives and Senate both passed an education budget bill which includes Gov. Doug Ducey's plan of 20 percent teacher pay raises by 2020.

The bill then went to Gov. Doug Ducey who signed it almost immediately.

"Signed," Ducey tweeted. "Teacher raises are on the way."

Education leaders confirmed to 12 News that the passing of the bill means the teacher walkout is over.

LIST: Is my school open or closed Friday for Arizona teacher walkout?

According to Gov. Ducey's plan, teachers will receive a nine percent raise in the fall and then five percent in 2019 and again in 2020. The additional one percent is a raise that was given out in 2017.

“When we started this movement, Arizona educators pledged to keep fighting for the schools their students deserve until the end, and we were true to our word. We will return to our schools, classrooms, and students knowing that we have achieved something truly historic. We should take pride in what we have accomplished, and in the movement that we have created together.

We recognize that we weren’t alone in this fight. There are far too many supporters to single out, but we are grateful for the support of parents, students, and the communities for standing with the #RedForEd movement. We also appreciate lawmakers who stood with us.

The #RedforEd fight continues. And since lawmakers aren’t getting the job done, we will. Today, educators will again rally at the Arizona Capitol. And over the next few days we will provide additional details about next steps.”

Ducey called the 20 by 2020 a "bipartisan plan" that "recognizes the hard work of our teachers and makes significant additional investments to improve K-12 education." It is part of a $10.4 billion budget plan for the entire state of Arizona.

According to Gov. Ducey's office, the education portion allocates $644.1 million for the 20 percent increase in teacher pay by 2020 and an additional $371 million to restore recession-era cuts to additional district/charter assistance over five years.

But many teachers at the Capitol Thursday morning were not happy, saying it's not enough. Many are already preparing for November. Rebecca Wilson, a teacher in Peoria with 35 fifth graders in her class, hopes more is done in the months ahead to raise funds for Arizona schools.

"I know people look at it as 'oh, look at all of this money we just got,'" she said. "But it wasn't ever about us. I'm watching my friends leaving the state that are phenomenal teachers, so that's where the raises come in, why that's important to keep people."

"It's sad that this is the way we had to go," Mendez said. "I love the initiative process but I wish we didn't have to rely on it. I wish we had a legislature that was mature and forward thinking enough to invest in our education."

"I needed to vote 'yes' on this one," Farley said. "It's $405 million in fiscal '19 alone in new money, over and above inflation enrollment growth that can be used to start to patch the damages done by the cuts over the last 10 years."

Joe Thomas said there are "a lot of promises by the governor that are not going to come true," in the plan.

A lot of what educators were asking for, according to Thomas, "is just not in this budget." He said teachers who came to the Capitol to voice their needs and plans for the classroom were "ignored."

Thomas said "the Red For Ed movement is here to stay" and they "we're not done bringing in resources."

Reductions in Arizona education spending have taken a large chunk of funds out of schools over the last 10 years. Teachers were fighting for more than just raises, including better pay for their support staff, a return to pre-recession funding levels and no more new tax cuts.

The Arizona Education Association's initial list of five demands for lawmakers at the beginning of the #RedForEd movement included a 20 percent salary increase for all teachers, bringing back funding levels for education to what Arizona saw in 2008, competitive pay for all support staff, a permanent salary with raises every year and no new tax cuts.

Gov. Ducey's plan he signed early Thursday, brings back some of the money from cuts made during the recession, adding up to around $400 million. The legislature is promising to restore the rest of that funding in five years and other cuts will stay for now.

According to previous reports done by 12 News from budget details we received, Gov. Doug Ducey's plan allows for schools to be flexible in handing out raises. There is no requirement for across-the-board 10/5/5 raises for every teacher over the next three years. 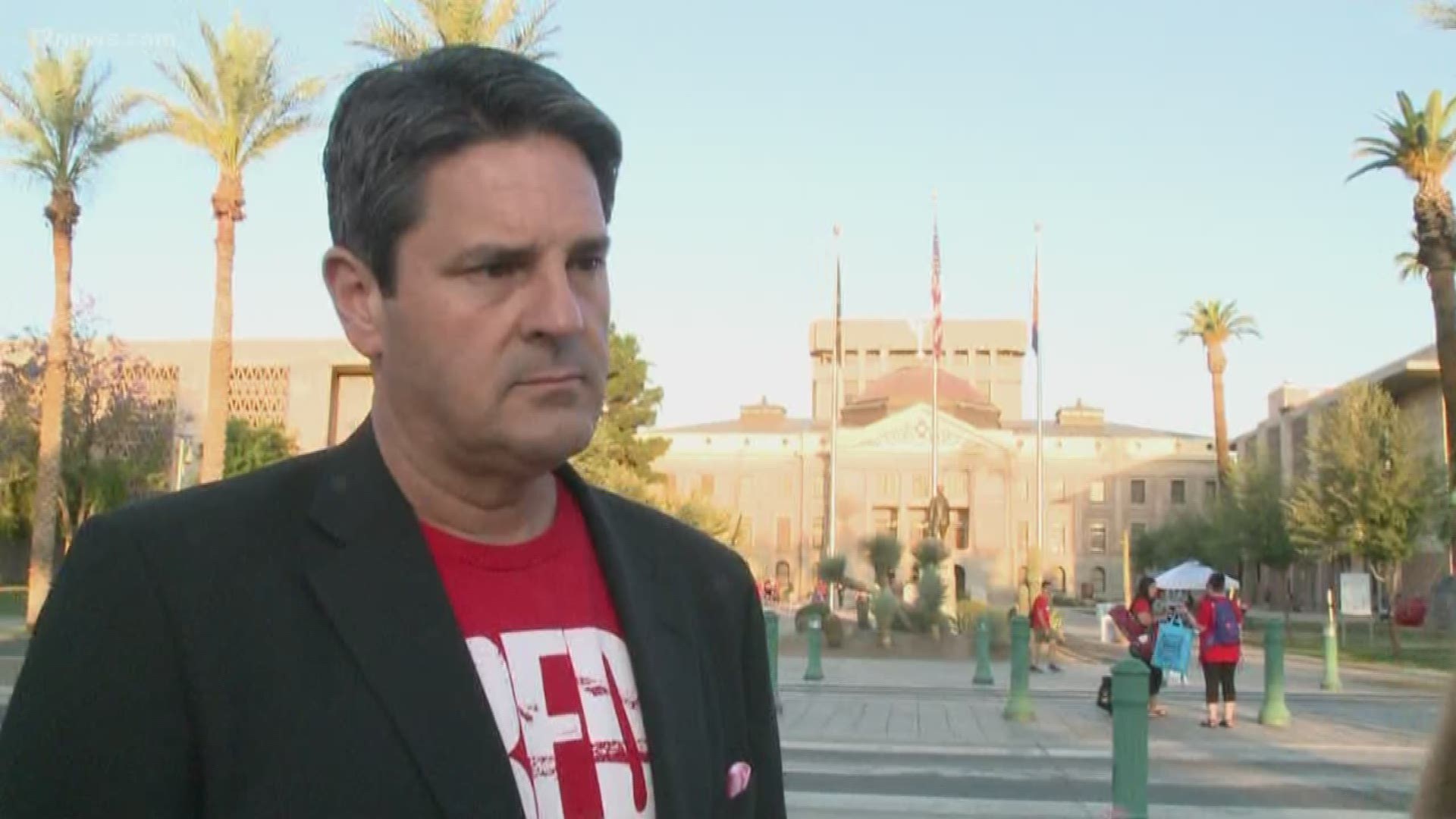 With the passing of the education budget, Arizona's Superintendent of Public Instruction Diane Douglas said she commends the governor and legislature for "working hard under difficult circumstances."

She said "many of the goals" in her State of Education address were "achieved," but added there was still "much work" that needs to be done.

"I feel we have made great strides towards the world class education system we want and that Arizona parents and students deserve,” Douglas said.

"Thank you to all," Ducey tweeted after signing the bill. "But most of all, thank you to our teachers."

Education leaders will now work on a ballot proposition, Thomas said, and let voters decide in November if they want to fund schools. In it's early stages, it aims at an income tax on high-earning residents.