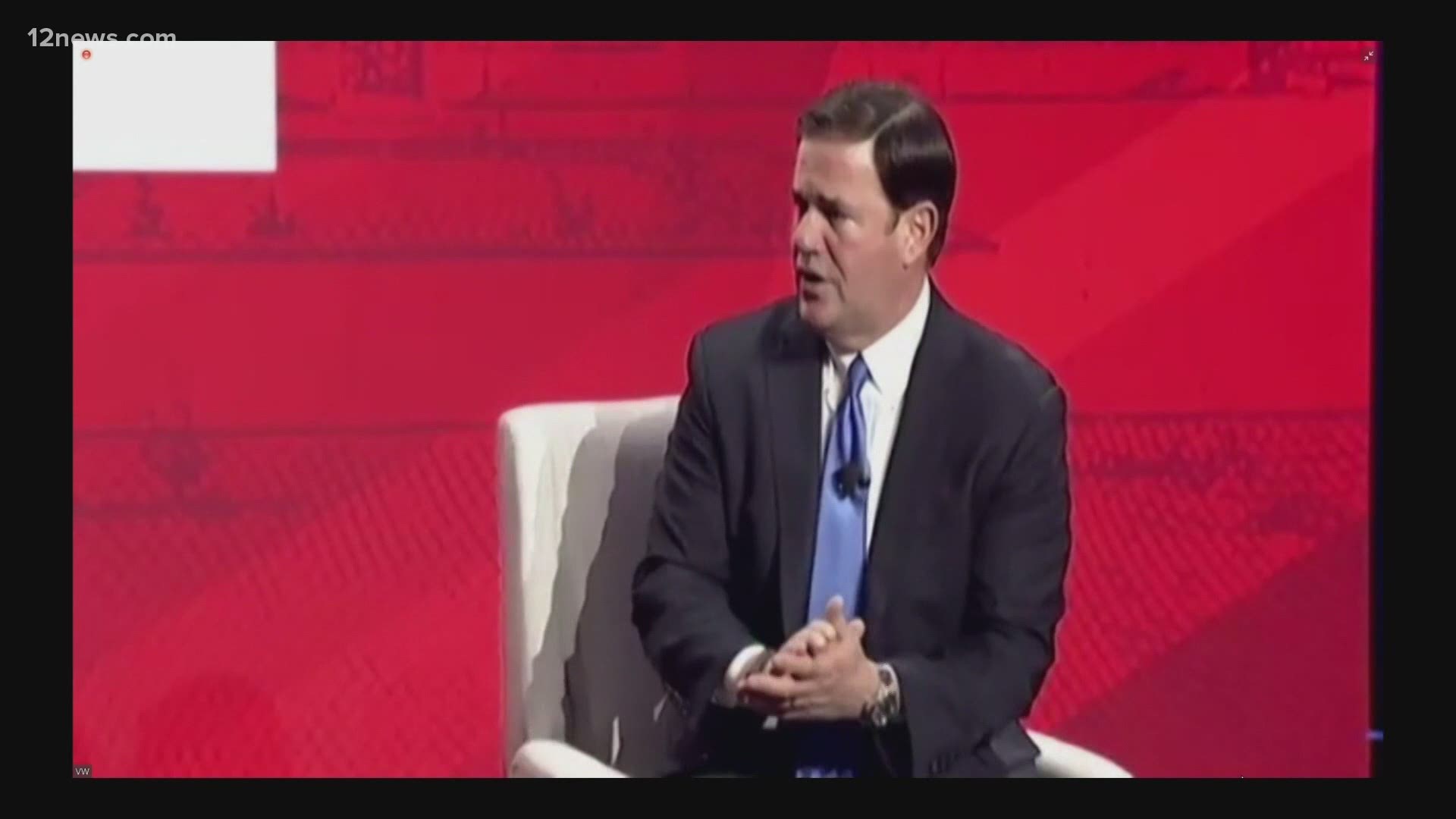 PHOENIX — Gov. Doug Ducey says he’s used the “right touch” in dealing with a pandemic that has propelled the state to worst-in-the-nation status for new COVID-19 cases.

“I do think we've been able to have the right touch so we can protect people,” the governor said Friday.

“We can also show that we’re not going to take our small business people and their employees for granted.”

Ducey's remarks came during his annual conversation with the head of the Arizona Chamber of Commerce and Industry, the state’s most powerful business group, ahead of the Legislature’s new session Monday.

The chats are typically chummy affairs between two friends and political allies. The only difference this year was that it was a virtual event without an audience.

“From the chamber’s standpoint, you've been the best governor in the country,” chamber chief executive Glenn Hamer told Ducey, the former CEO of an ice-cream chain.

During his annual State of the State speech to the Legislature at 2 p.m. Monday, the governor is expected to focus on the almost month-old vaccine rollout as a sign of hope.

Over the weekend, Arizona’s total number of coronavirus cases topped 600,000. The state's death toll surged past 10,000, with 2,000 dead since Christmas week alone.

The virus “is mowing through Arizona like a sharpened scythe,” Dr. Joe Gerald, a researcher at the University of Arizona’s Mel & Enid Zuckerman College, said in his latest modeling report.

“Fatalities are stacking up like cordwood in advance of a long winter. Barring intervention, daily cases and fatalities will double or perhaps quadruple before the outbreak collapses under the weight of natural, not vaccine-induced, immunity later this spring.”

Gerald had harsh words for Ducey:

“While Arizonans’ poor individual decisions are undoubtedly contributing to viral spread, the governor’s inaction in the face of a clear and present danger is of greater concern… He has performed more poorly compared to his prior success this summer. This latter point highlights the calculated indifference of his current response.”

Ducey has been widely criticized for abbreviating his statewide lockdown in early May, ahead of a Phoenix visit by President Donald Trump.

What followed was a summer COVID-19 surge that propelled Arizona for the first time to worst-in-the-nation for per-capita case growth.

Ducey said he was “humbled” and took steps to knock down the surge. But the governor failed to respond in the fall, amid warnings that Arizona was poised for exponential case growth after Thanksgiving that would overwhelm hospitals.

“If I saw somebody who had a better approach for Arizona I'd apply it,” Ducey told Hamer. “But we’ve done what’s right for Arizona through this.”

The state's largest hospital network, Banner Health, has been overwhelmed by the pandemic. Banner has urged another approach for weeks.

"Our predictive models indicate that (the pandemic) will only get worse."

But the governor believes he's doing the right thing, balancing Arizonans’ health and the economy.

By one measure, Ducey’s response has worked: The state is flush with cash.

Consumers are spending, according to the Legislature’s independent financial analyst, and Arizona is taking in more money than a year ago, despite dire predictions last spring.

On the other hand, many people are still hurting. The state’s jobless rate sits at an eight-year high, and the number of Arizonans collecting jobless benefits is six times what it was a year ago.