According to the National Human Trafficking Hotline, last year there were 234 trafficking cases reported in Arizona alone. 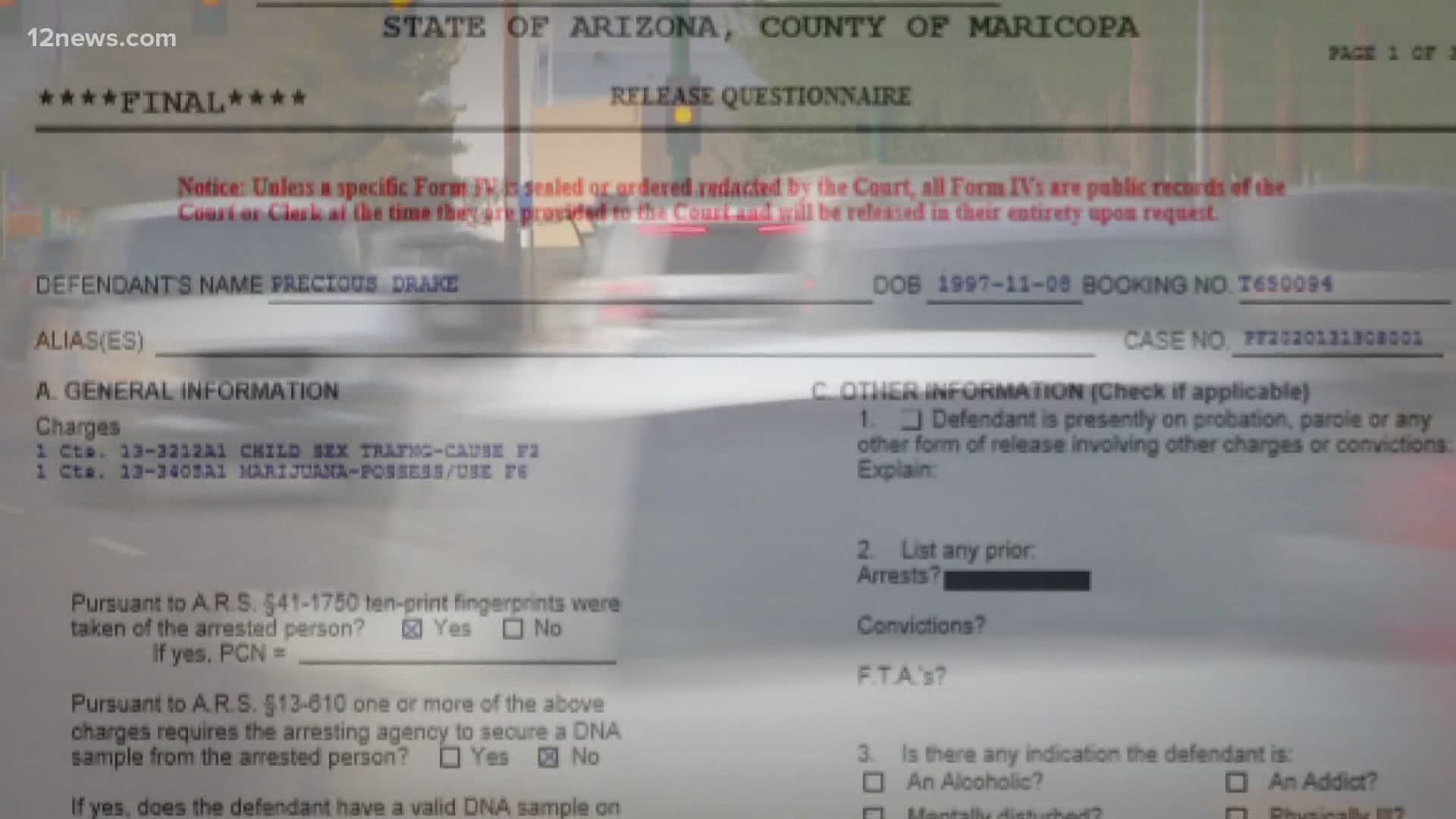 PHOENIX — Phoenix police say a woman was arrested after she tried arranging sex between a 16-year-old girl and an undercover detective.

According to court documents, it happened near 27th Avenue and Camelback Road Saturday night. Around 8 p.m., documents allege 22-year-old Precious Drake went up to a man and offered to have sex with him for $100.

That's when she called over her so-called friend, who was only 16-years-old and offered her to the man for another $100.

Drake didn't know she was propositioning an undercover detective. Cops took both Drake and the teen into custody for questioning.

They told police they traveled from Mississippi to Texas then to Arizona with the victim's boyfriend.

“We only think about trafficking when we see the movie ‘Taken’ or things like that so it doesn’t enter into our mind. The reality is trafficking happens in grade schools. It happens in elementary and high schools.”

Courtney Bollinger of StreetLightUSA, an organization that works with girls victimized or at risk of sex trafficking, says the statistics are alarming.

According to the National Human Trafficking Hotline, last year there were 234 trafficking cases reported in Arizona alone.

Bollinger says the average age of someone lured into trafficking in Arizona is 14.7. She says often times after a child runs away, all it takes is 48 hours before they are contacted by a trafficker.

“Unfortunately traffickers and pimps and groomers all know how to pick out a kiddo who is alone and afraid and does not feel loved," Bollinger said.

Bollinger says in addition to showing your children love, there are a number of things you can do to keep your kids safe including talking to them about sex trafficking.

“Talk to your children about sexual abuse. Talking to the kids about social media and the dangers of it. This one is huge. Social media is the top platform now for traffickers to find victims," Bollinger said.

Bollinger recommends parents download an app like Bark to help monitor your children's activity on their devices.

Bollinger adds police can only be in so many places at once so it's critical for the public to look out for signs. If you notice something that does not seem right, report it.

If you or someone you know has information about a trafficking situation, call the police or contact the National Human Trafficking Hotline at 1-888-373-7888.