Argument leads to two dogs stabbed in Phoenix; one dead, one recovering and learning to trust again

A dog died from its wounds while the other one survived the brutal attack and is being rehabilitated by the Arizona Humane Society. 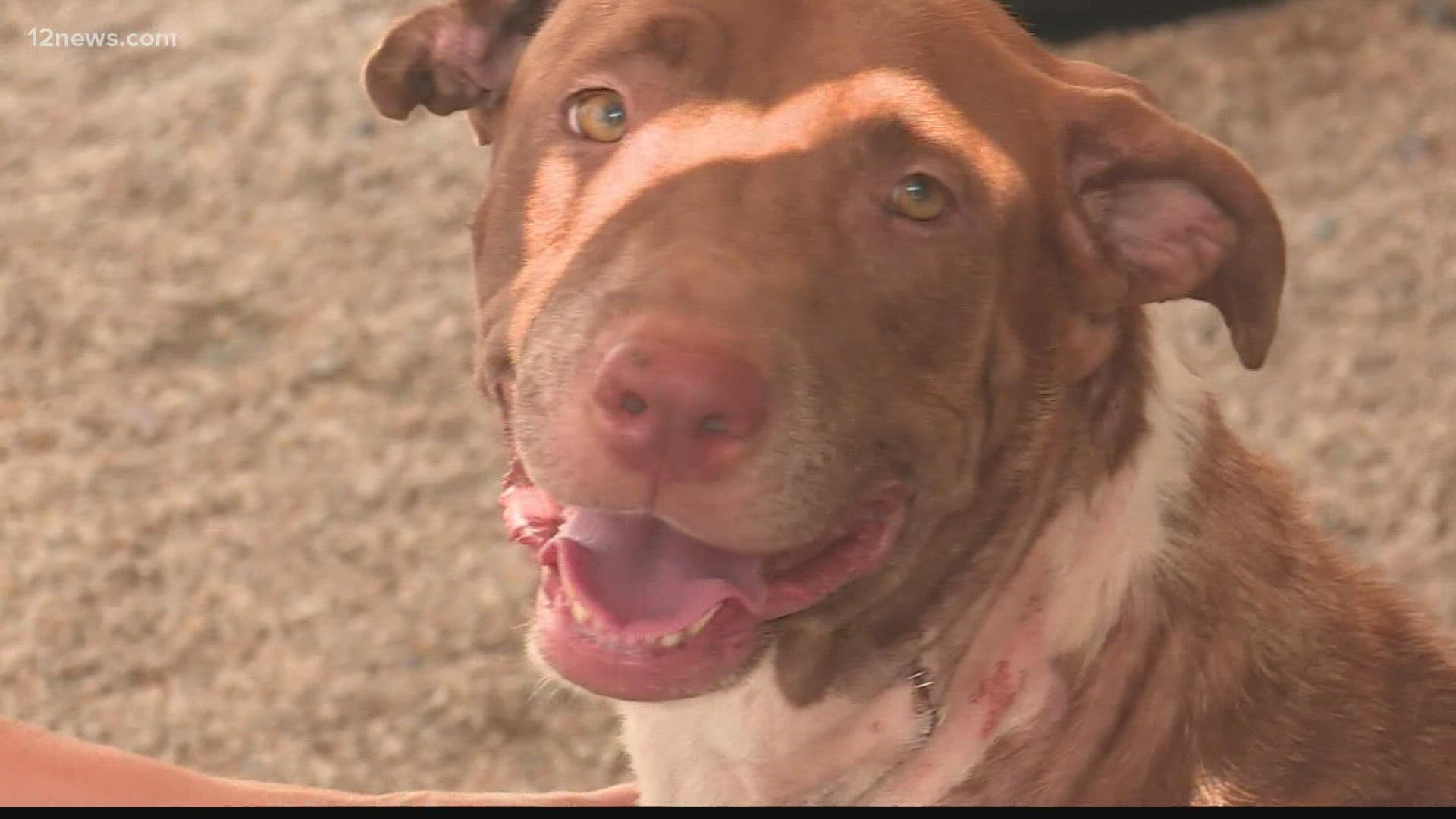 PHOENIX — It’s been a crazy and traumatic week for an American Pit Bull Terrier, who the Arizona Humane Society is calling “Mindy.”

Mindy is on the mend after suffering what AHS investigators call a brutal knife attack that claimed the life of Mindy’s sister.

“When we arrived on the scene, our Animal Investigator described it as ‘brutal’,” said Bretta Nelson of the Arizona Humane Society. “The dogs had been stabbed, there was blood everywhere, they were very lethargic.”

AHS’s Emergency Animal Medical Technicians were called to the scene on August 5, 2021, near 24th Avenue and Papago Street, after police responded to a disturbance call and found both dogs gravely wounded. The EMTs worked to save the lives of the two dogs and drove them to AHS’s Second Chance Animal Trauma Hospital.

“Sadly, one of the dogs did not make it,” said Nelson. “the other dog, Mindy, she is in the care of the Humane Society’s Trauma Hospital right now. She did have to undergo emergency surgery, to tie off one of her vessels to stop the bleeding. She also has tick fever, a lot of hair loss, and, as you can imagine, is quite timid in the shelter environment.”

But Mindy goes by another name. Until the attack, Mindy was known to her owners as “Tres P.”

“She’s very loving but very protective,” said Tres P’s - or Mindy’s - owner, Renee Udave. “But she is just completely loving, she just wags her tail. But, if you are out of the yard and she’s in the yard, then she becomes more of, I guess, the aggressive type.”

On that Thursday, according to Udave, an acquaintance of Udave, Feliciana Garcia, came to Udave’s home, demanding to see one of Udave’s relatives. Garcia unravels the chain that held the gate to Udave’s front yard closed, and entered Udave’s property, armed with a knife.

As Udave and Garcia argued, the chaos and excitement were too much for Tres P (Mindy) and her sister, Shady. The two dogs ran from the house to the front yard to see what was going on.

With all the commotion, Tres P and Shady barked and, as dogs sometimes do, started to fight with each other in the confusion. Udave says before she knew it, Garcia was stabbing the two dogs with her knife. A friend had to keep Udave from intervening and potentially getting stabbed herself.

“[Garcia] came in with the intentions of hurting someone and my dogs just foiled her plan,” said Udave.

Mindy has spent the past week healing from stab wounds to her neck and learning to trust people again. Bretta Nelson said chicken and hot dog treats are helping in that area. As are back scratches; Mindy loves back scratches.

“There’s so much we can learn as humans about dogs,” said Nelson. “How they handle things and how they bounce back and their ability to trust and love again.”

The road to rebuilding her trust in humans will be a little more complicated than treats and scratches for Mindy. Soon, Mindy will stay with a foster family, who will have the hard work of rebuilding that trust and showing Mindy that some humans are, indeed, worth loving.

Feliciana Garcia is now facing two counts of Animal Cruelty charges, each a class 5 felony. Each charge could mean anywhere between a half of a year to two and a half years in prison if Garcia is convicted.

To report animal abuse or neglect, people are encouraged to call their local police department or the Humane Society's dispatch team at 602-997-7585 ext. 2073.