The Buckeye Police Department has submitted charges against the former school district employees to the Maricopa County Attorney's Office. 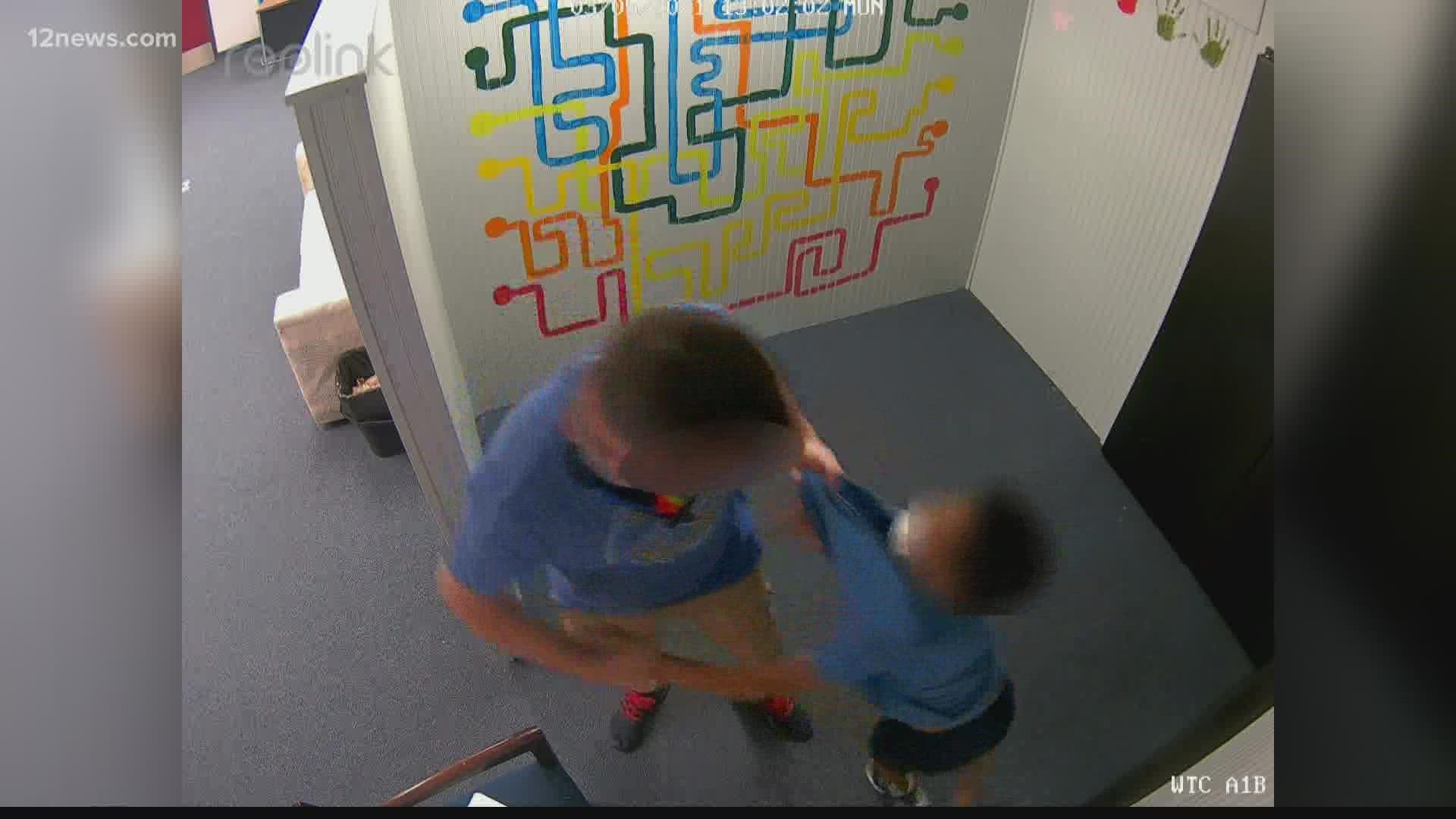 BUCKEYE, Ariz. — Video and documents released to 12 News by Buckeye Police Department are showing what caused two now-former Litchfield Elementary School District employees to end up under investigation by police for mishandling students.

One incident reported in early May

In early May, documents from Buckeye Police Department's investigation show a parent reported to White Tanks Learning Center that their child had come home hurt.

The documents said the parent believed their son was mishandled by a paraprofessional at White Tanks, leading school and district administration to call in Buckeye police.

In body-worn camera footage, a detective for the department responds to the school where staff shows him a clip of the paraprofessional interacting with a student.

12 News is not naming the paraprofessional because he's not facing any charges currently.

In the video, the paraprofessional is seen in what the school calls the "safe area" with a student.

Documents from Buckeye police said the student knocked over a chair, and the paraprofessional, "grabs (the student) with both hands from the top right corner and forcefully throws him into the lower right corner which is padded."

The documents said the paraprofessional made other moves as well to 'throw' the student into the padded corner again.

"You can see one hand down, so he's holding him by the back of the neck," an administrator said.

"Is that against your guys' policy? How he's being treated? What you can physically see?" the detective asked the administrators.

"Yeah, that absolutely would not be okay," one administrator replied.

Investigative documents show the school district found several other incidents involving not just the paraprofessional, but other staff as well.

Brian Beery, a former special education teacher in the district is seen in several of the videos interacting with students in the "safe area".

One video shows the interaction 12 News reported on in September with JP "Ace" Crane.

"He was tugging my arm," Crane said. "He did slam me against the wall. It was cushioned but it did kind of hurt."

White Tanks Learning Center has both special and alternative education programs. According to the documents, all staff members involved with students are trained on de-escalation and control holds.

However, Buckeye police noted in their reports the incidents the district found are, "not consistent with that training and are not a part of the CPI holds."

Other incidents were also documented on the surveillance video included the paraprofessional and other staff.

RELATED: 'It did kind of hurt': Former Litchfield Park teacher gave up teaching certificates after 'multiple' instances of excessive force with students

According to the documents, Beery resigned from Litchfield Elementary School District.

A district spokesperson told 12 News Beery had worked in the district since 2017.

Documents from the Arizona State Board of Education show the "multiple incidents of excessive force on students" led the board to accept Beery's voluntary surrender of his teaching certificates in August.

Beery has not responded to 12 News's requests for comment.

The paraprofessional was terminated from his job at White Tanks, according to police records.

His attorney tells 12 News they do not comment on open cases.

On police body camera footage, the paraprofessional does talk with the detective who was called to the school about the first incident.

"I've been here for two years and after a certain amount of time, things started to get to me I guess," the paraprofessional said.

"So was it more like frustration? Did you feel frustrated?" the detective asked the paraprofessional.

"Honestly, yeah, I let it get the best of me," the paraprofessional said.

Another staff member seen in the videos was also written a letter of reprimand according to police records.

The Maricopa County Attorney's Office tells 12 News they're still reviewing the cases against Beery and the paraprofessional on whether to bring charges or not.