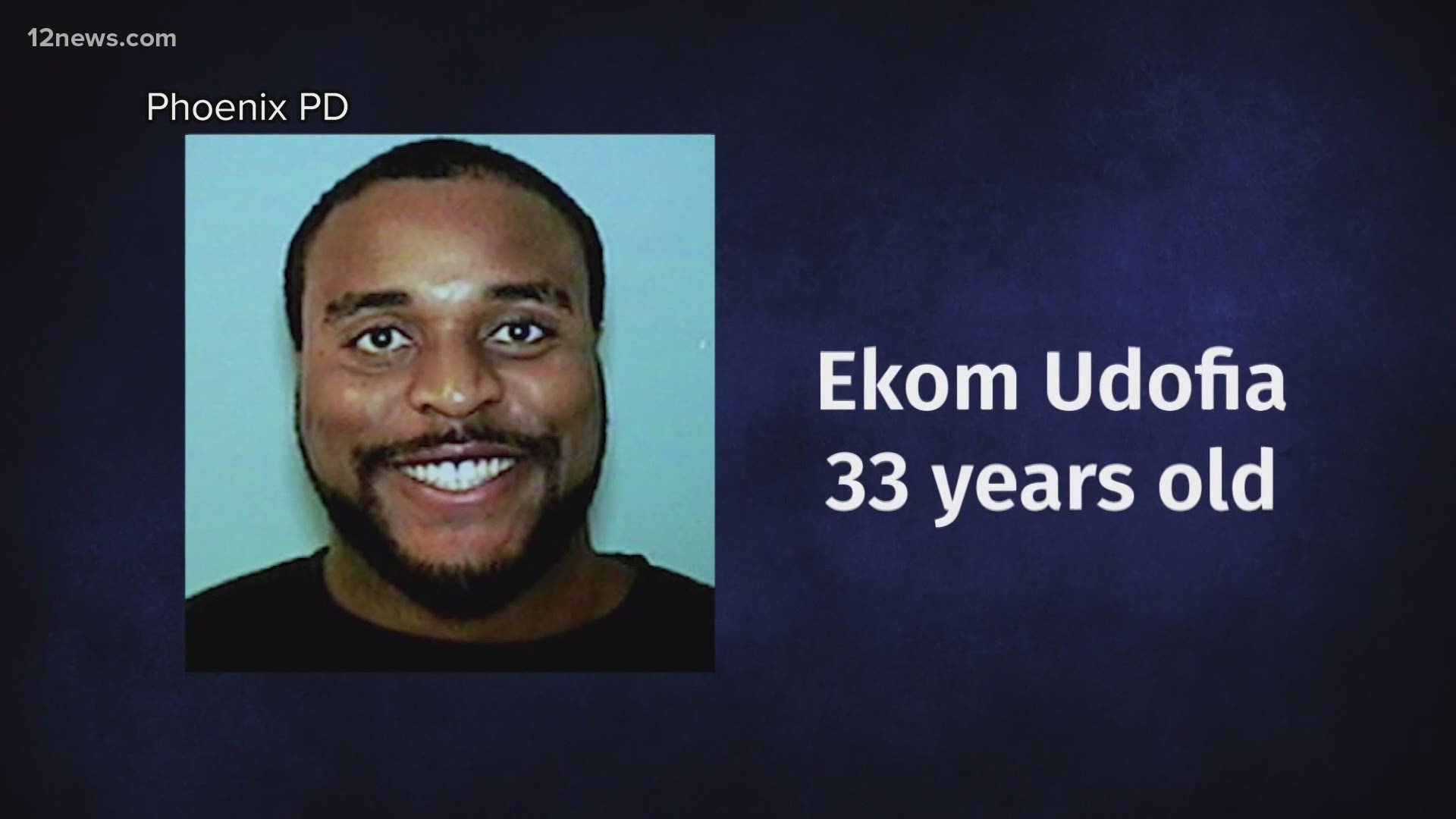 The edited video released on Monday showed the shooting of 33-year-old Ekom Udofia near Interstate 17 and Indian School Road on Nov. 30.

Officers responded to 911 calls of a man standing in the middle of the street, acting bizarrely and possibly under the influence of drugs.

When officers arrived, they found Udofia in the street holding a gun.

Police say Udofia refused to cooperate with officers and walked towards them with the weapon in hand.

“Please drop the gun,” an officer can be heard saying in the video. “Do not make me shoot you. I got to shoot him.”

“Do it,” another officer said as a hail of gunfire erupted.

“At some point when he gains ground on you, you are going to fire a shot,” said Robert Ivy, a former New Mexico Police officer who looked at the body camera footage for 12 News.

The video below was edited by the Phoenix Police Department and contains graphic content. Viewer discretion is advised.

Udofia immediately fell to the ground in the video as officers continued to yell orders for him to drop the weapon, but police say he refused to let go.

When more officers arrived, Udofia was shot by bean bag rounds from a shotgun and was shot again when police say he raised the gun towards them.

“From what I saw on the video, he’s still armed, he still has it in his hand,” Ivy said.

Police continued to shoot Udofia with pepper balls until a K9 United was used to arrest him.

The weapon turned out to be a BB gun.

Officers gave Udofia medical treatment after the shooting, but he died at the hospital.

Ivy said the shooting seemed to be justified from his analysis.

“It was a tragic, tragic story for everyone involved. It should not have ended this way,” Andy Anderson, a former Phoenix police officer, said.

Udofia’s life was one of potential.

He was an all-American football player at Chaparral. A top recruit, who went to Stanford.

But his attempts to have a successful NFL career never caught on.

In 2019, he pleaded guilty to indecent exposure, assault and unlawful flight from the law.

“It’s my understanding that either the family or the friends indicated that the individual had some had mental issues," Anderson said.

Anderson said, overall, society needs to better address mental health issues to prevent shootings. He said the time for intervention is earlier than dealing with it at 2 a.m. in a life and death situation.

“This is a society issue, this is far larger than law enforcement. This is an issue that we as a community and nation need to deal with, It should not end up at 2 o'clock in the middle of the street.” Anderson said.

We reached out to the family, but they have legal counsel and have no comment.

Four officers were involved in the shooting. None of them were hurt.

The incident is still under investigation.