New recordings of Chad and Lori Daybell come to light in the first day of hearings against the Idaho doomsday author connected to two dead kids with ties to Arizona. 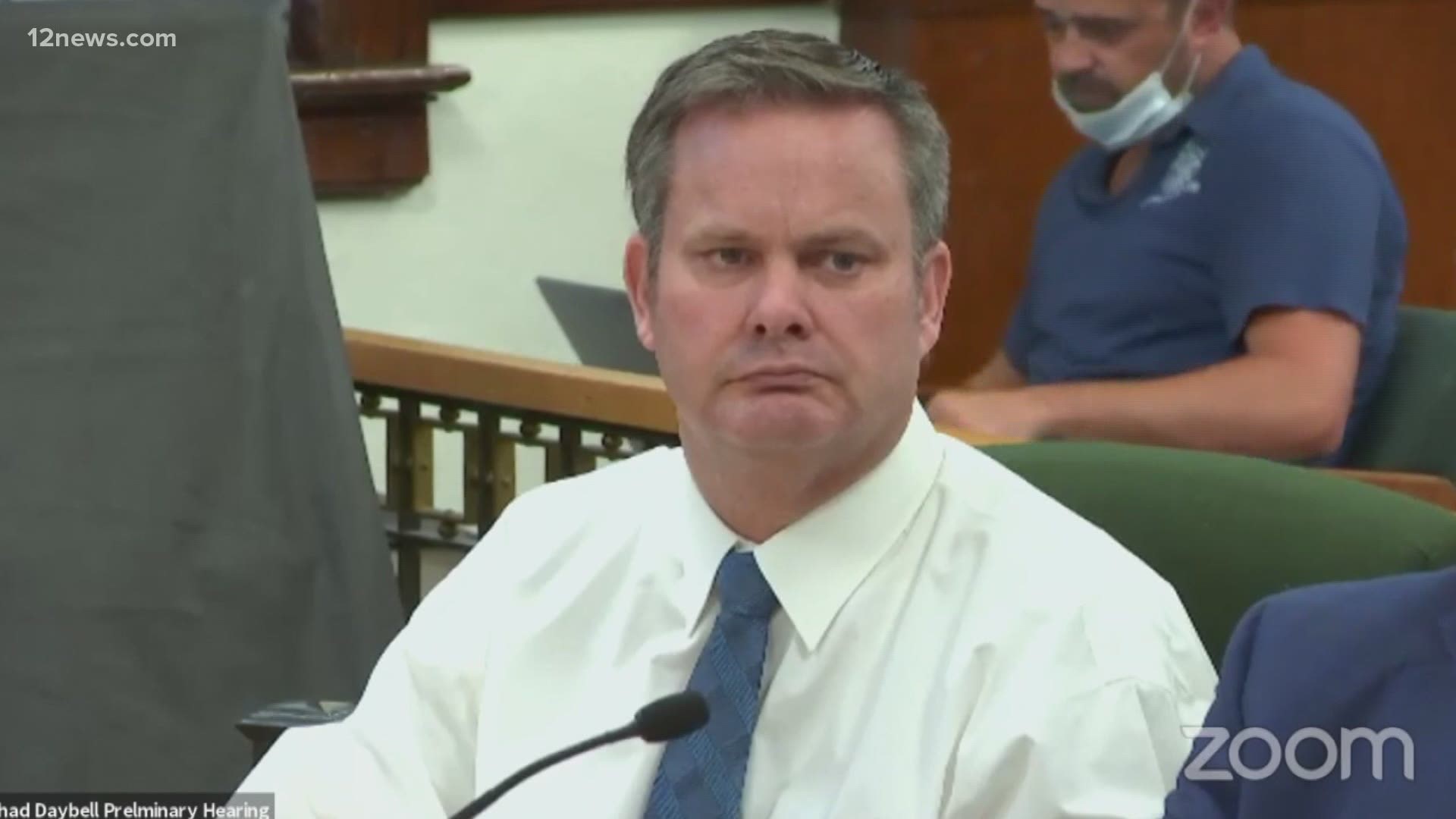 On Monday, witnesses took the stand for the first time in the case against Chad Daybell.

Daybell was arrested back in June after his wife's children, Joshua "JJ" Vallow and Tylee Ryan, were found buried in his backyard in Idaho.

Their mother, Lori Vallow Daybell, has been behind bars since March after she was arrested for their disappearance.

A lot of this case started to unravel in Arizona, where Lori and the children were living before court records show her moving them to Idaho in September 2019.

The first witness called by the prosecution was Rexburg Police Detective Ray Hermosillo.

He went on to testify that he tracked the couple to Hawaii, where Lori was eventually arrested.  He was also on the Daybell property in June when investigators found Tylee and JJ's bodies.

"From the hundreds of pictures and videos I’d seen over the past 8 months," he tells the court."I recognized him as the same little boy that was lying on the table."

Hermosillo tells the court that JJ was wearing red pajamas and wrapped in a blanket and bound heavily with duct tape before he was buried in plastic bags.

He explains that some of Tylee's remains were charred.

A lot of this testimony is tearful for JJ's grandparents, Kay and Larry Woodcock. They were the first to alert police that they hadn't heard from JJ, which prompted the first welfare check back in November 2019.

At this time, both Chad and Lori are facing felony charges for conspiracy and concealing evidence.

At one point during the hearing, the state introduces a body-camera video from Rexburg Police, from Nov. 26, 2019, when they first try and do a welfare check on JJ.  You can hear Lori telling police that JJ is with her friend, Melanie Gibb, in Arizona. We'll get back to her in a minute.

You can also hear Lori tell police that one of her brothers is out to kill her and that other family members, including Kay Woodcock, are causing her trouble.

Kay is the sister of Lori's former husband Charles Vallow.  Charles was killed by Lori's brother, Alex Cox, at his home in Chandler back in July 2019.  Cox claimed self-defense. The case is still under investigation.

Back in court, Kay shakes her head in disbelief listening to the recording of Lori.

"I’ve raised all of my kids," Lori says in the recording.  "I’ve done everything I’m supposed to do. Everyone is causing me trouble right now."

Lori goes on to explain to the police that she moved to Rexburg in September and that her daughter Tylee is a student at BYU-Idaho.

Throughout the day, the court heard from other officers with Rexburg Police, as well as the Dean of Students from BYU-Idaho who testified they had no record of Tylee Ryan being a student.

Investigators also set the stage for how they used cell phone records from Lori's brother, Alex Cox, to lead them to the location of the children's bodies in Chad's backyard.  Cox died in December at his home in Gilbert.  The Maricopa County Medical Examiner ruled it a natural death, but Gilbert Police still say they're investigating.

Chad's lawyer points out that just because a device is somewhere, doesn't mean a person is somewhere.

The last witness of the day was Melanie Gibb, a close friend of Lori and Chad's.  In November, when Lori told police that JJ was with Melanie Gibb, Gibb says she got a call from Chad later in the day.

"He said 'Hi Melanie.  This is Chad. The Rexburg Police are going to call you. Don’t pick up."

Gibb tells the court at this point in time, she thought JJ was with Kay Woodcock because Lori told her that's where he was.  Gibb says that Lori told her she dropped JJ off at the airport to stay with Kay and that she told Kay she had breast cancer and needed help with JJ.

Gibb says that Lori also called her after Chad did, and asked Melanie to tell police that JJ was with her.  Gibb says Lori asked her to take a picture of other children to try and make it seem like she was with JJ.  Gibb said she didn't return the calls from Rexburg Police that day, but she did talk to Gilbert Police in Arizona, who was also investigating the children's disappearance.

When asked what she told Gilbert Police, Gibb said she originally told them that JJ had been with her previously but he was back with Lori as a way to steer the investigation back to Rexburg.  She later admitted this wasn't true.

"Lori was misleading and Lori was manipulating me or trying to convince that he and she were in danger and because of our friendship - I thought I had really no idea if this could be true or not," Gibb testifies. "And I was very perplexed. Very troubled. I didn’t know what to do. I was trying to reconcile all these feelings I had."

Gibb says she would later go on to confront Chad and Lori in a phone conversation on December 8th, 2019, she would record and turn over to police.

In the call, which was played in court Monday, Gibb asks multiple times about JJ's whereabouts.

"He is safe and happy," Lori replies.

Lori and Chad go on to tell Melanie over the phone that they can't reveal where JJ is for his own safety.

"And keep you protected and keep everybody else protected," adds Chad.

The call lasts about 21 minutes before dropping out.  Melanie continues to ask questions as she and Lori discuss religious influence in the case.

Records say that Chad and Lori follow dark religious beliefs that could be at the center of this case.  Court documents accuse Chad of being a doomsday cult leader and that he and Lori were preparing for the ends of times.  Documents say they also believe that people could be "light" or "dark" and that some people turn to zombies.  In one record from earlier this year, Lori says that her children are "zombies" that "might need to die."

"I believe you have been very deceived by Satan," Gibb tells Lori in their recorded phone conversation. "I believe that he has tricked you. I don’t believe what you’re doing is correct. I just don’t."

Gibb goes on to talk to Lori about her relationship with Chad. Lori and Chad married after JJ and Tylee disappeared.  Their marriage was also weeks after Chad's first wife, Tammy Daybell died in their Idaho home.  Investigators are still investigating her death, which is considered suspicious.

"It’s just not true," Chad tells Gibb over the phone. "My own children were there. They testified Tammy had been getting weaker and sick and I begged her to go to the doctor because she just - her heart was failing her. She was physically falling apart she needed a doctor. She just passed away. That’s how it happened."

Before the phone call stops, Lori and Gibb talk more about faith and friendship, with Gibb expressing all her concerns to Lori.

"My salvation is not in trouble at all and I think you should check that with the Lord again," Lori defends.

Gibb will be back in court Tuesday morning for cross-examination from Chad Daybell's attorney.