The trooper admitted to threatening to kill his ex-wife's fiancé, violating a protective order and using a Taser on a puppy. 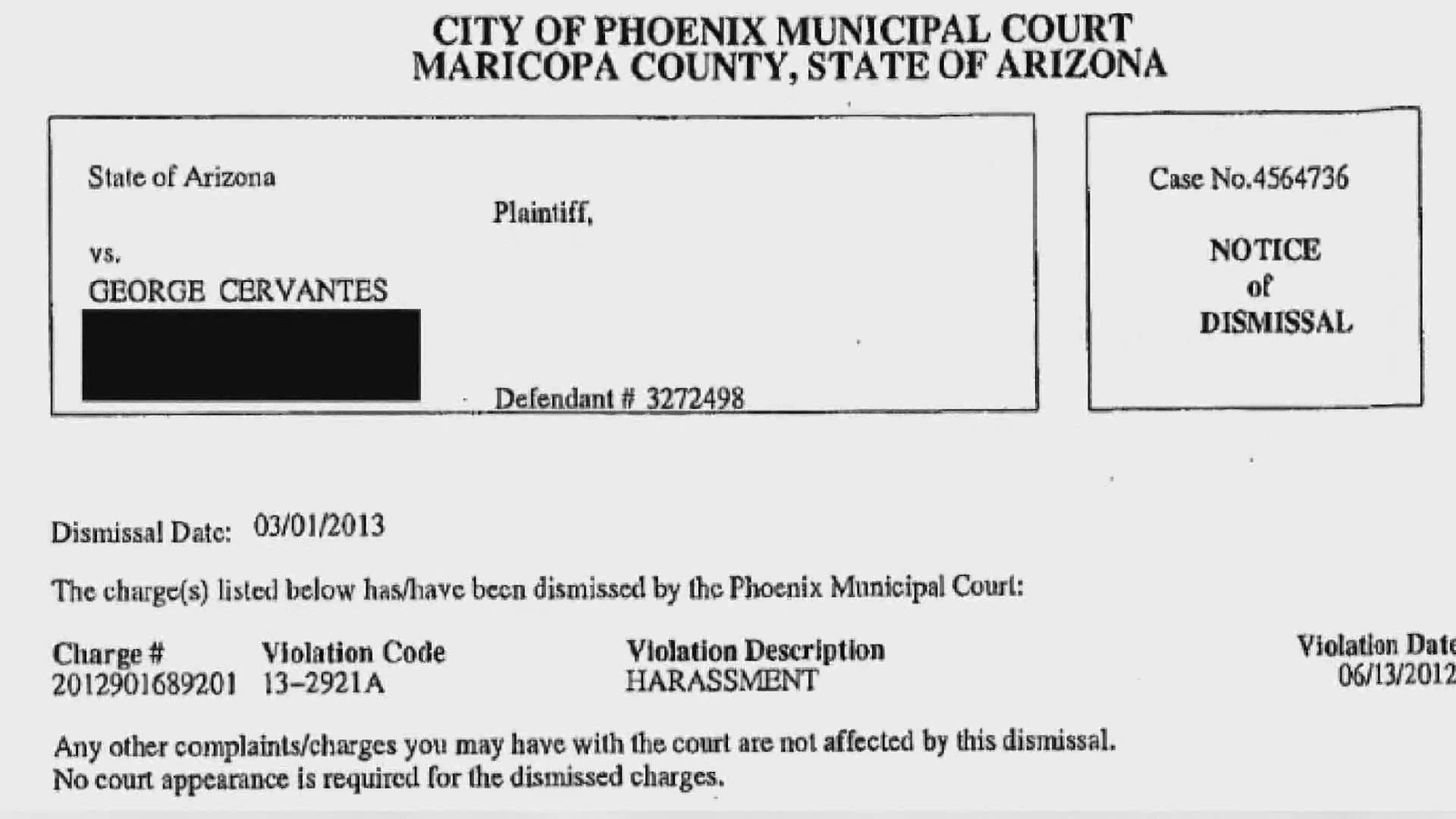 PHOENIX — George Cervantes, the state trooper who shot Dion Johnson as Johnson was passed out in a car along a north Valley freeway in May, had a long history of incidents where he brushed up against the law, according to a police report released Thursday evening.

DPS released a 367-page internal affairs report on the Trooper who shot Dion Johnson on Thursday in which the trooper was reprimanded for several incidents including harassment and using his taser to discipline a puppy. The report described other incidents, including one in which a Valley police officer asked the Maricopa County Attorney's Office to file intimidation and harassment charges against Cervantes.

Cervantes was the officer who found Johnson passed out in his car parked near Loop 101 and Tatum on Memorial Day. Police say Cervantes reached into the drive-side window possibly to take the keys away or remove a gun in the car when a struggle broke out.

Cervantes ended up fatally shooting Johnson during the struggle, and Johnson's family has repeatedly demanded transparency during the investigation.

Among the incidents in the report:

Cervantes used his patrol car to leave a threatening letter on his ex’s car. Investigators say Cervantes used the department printer to print a note that read: "I see you. I know where you live.”

The victim reported the note and believed someone was stalking her. After an investigation by Phoenix and Peoria police, it was discovered the note was left by Cervantes who said it was meant to be a joke.

“I allowed my emotions, impulsiveness and other underlining issues I had, that I was not aware of until this incident impaired my decision of leaving an identifiable note,” he said.

Cervantes was charged with harassment and was ordered not to contact the victim’s children. However, the report says Cervantes texted her son "I'm breaking the law right now to text you," and he was disciplined for insubordination.

Cervantes is disciplined for inefficiency, insubordination and misuse of state property. He admitted to using his department-issued Taser several times to discipline his then-girlfriend's puppy after it dug holes in the backyard, according to the report.

When confronted by his supervisor, Cervantes said he was frustrated that other disciplinary methods weren’t working and believed it would be the “most quick and easiest” method to train it.

“Had she stated for me to not use my Taser on the dog, I would not have used it a second time,” Cervantes said in the report. “In my opinion, Phoenix PD was attempting to build a case with whatever information they deemed fit. I could have easily denied these allegations with no evidence to either deny or confirm other than my own admittance. I’m asking for leniency in return for my honesty."

The report noted a turbulent relationship between Cervantes and his ex-girlfriend who was not identified. The relationship ended after five years, and Cervantes argued it influenced his actions.

He was also accused of confronting his ex-wife’s fiance’ during a custody exchange of their 4-year-old daughter and saying “you have some (expletive) balls to come here.”

He also admitted to police that he told the fiance’ “Do you realize I carry a gun every day? Do you realize that I could but a bullet in your brain anytime I want to?”

He also told investigators that he had told his ex-wife that if he ever met her fiancé, he “would not be responsible for his actions.”

A Goodyear police officer forwarded his investigative report to the Maricopa County Attorney's Office asking that Cervantes be charged with harassment and intimidation, a Class 1 misdemeanor.

Cervantes was suspended without pay for 80 hours for all the incidents.

In his defense, Cervantes said, “I have served my country proudly as a soldier in the U.S. Army for 20 years, in those 20 years, I had one blemish in my record early in my career as a young private. I was able to adapt and overcome that one incident and continued to serve and retire.”

“In my opinion, I believe I understand duty, commitment, honor, selfless service and pride better than most individuals.”

The full report can be read here.