Chansley, an Arizona native, became one of the most recognizable faces of the Jan. 6 insurrection at the U.S. Capitol. But he is also well known in Phoenix. 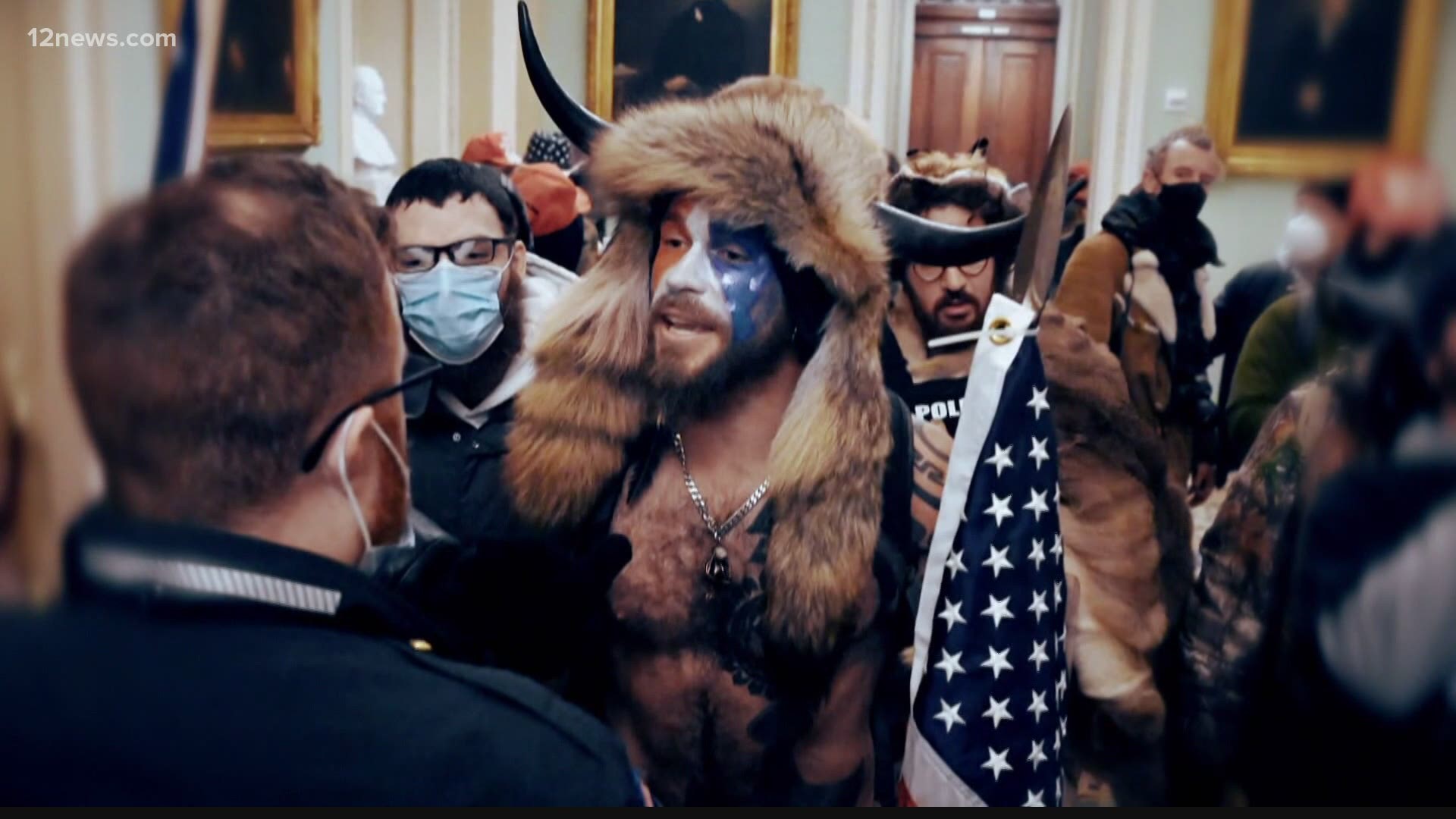 COLORADO, USA — Jacob Chansley, or the "QAnon Shaman",  will remain behind bars after another effort to get him released fell short.

Chansley, an Arizona native, became one of the most recognizable faces of the Jan. 6 insurrection at the U.S. Capitol. But he is also well known in Phoenix for attending protests and rallies wearing distinctive buffalo horned head garb, face paint and tattoos.

He is also usually carrying a sign that says “Q sent me.”

Chansley was captured on video making his way to the Senate Dais and writing a threatening note to Vice President Mike Pence.

Since turning himself into the FBI in Phoenix, Chansley has remained behind bars, charged with multiple misdemeanors.

This week the latest attempt to get him released before his court date failed.

To get out, his lawyers had to prove two things. First, that he wasn’t a danger to people. Second, that he was not a flight risk.

Prosecutors used the fact that Chansley carried around a flag with a spearhead attached to the top as part of the reason Chansley was a danger to others.

Chansley’s attorney argued that the spearhead was zip-tied on, and could never be used as a weapon. He also said that his client was not a flight risk because his family all lives in Arizona, he has no passport and he does not speak any other language.

In court documents denying the defendant's request, the judge seemed much more skeptical of the argument that Chansley would not be a flight risk if released.

The judge pointed out that Chansley already made a trip across the country, may be able to raise large amounts of money off his fame, and had a mother who has repeatedly said to media outlets that she believed her son did nothing wrong.

“They want to send a message to others that someone famous like this is not going to get away with it,” Scott Halverson, a Valley Civil Rights Attorney said.

At the end of his testimony, Chansley’s attorney brought up a concern that he believed his client’s mental health was deteriorating after spending 150 days in solitary confinement.

“It's well documented that solitary confinement with no human contact can take a toll,” Halverson said.

Halverson said that the time spent in solitary is unusual but not unheard of. Especially if they are trying to keep a person safe from other inmates.

But in the end, the judge denied the argument, keeping the man who became the face of one of America’s darkest days, behind bars.