An MCSO deputy who pulled his gun on a cyclist while working security in Scottsdale is now the subject of an internal investigation. 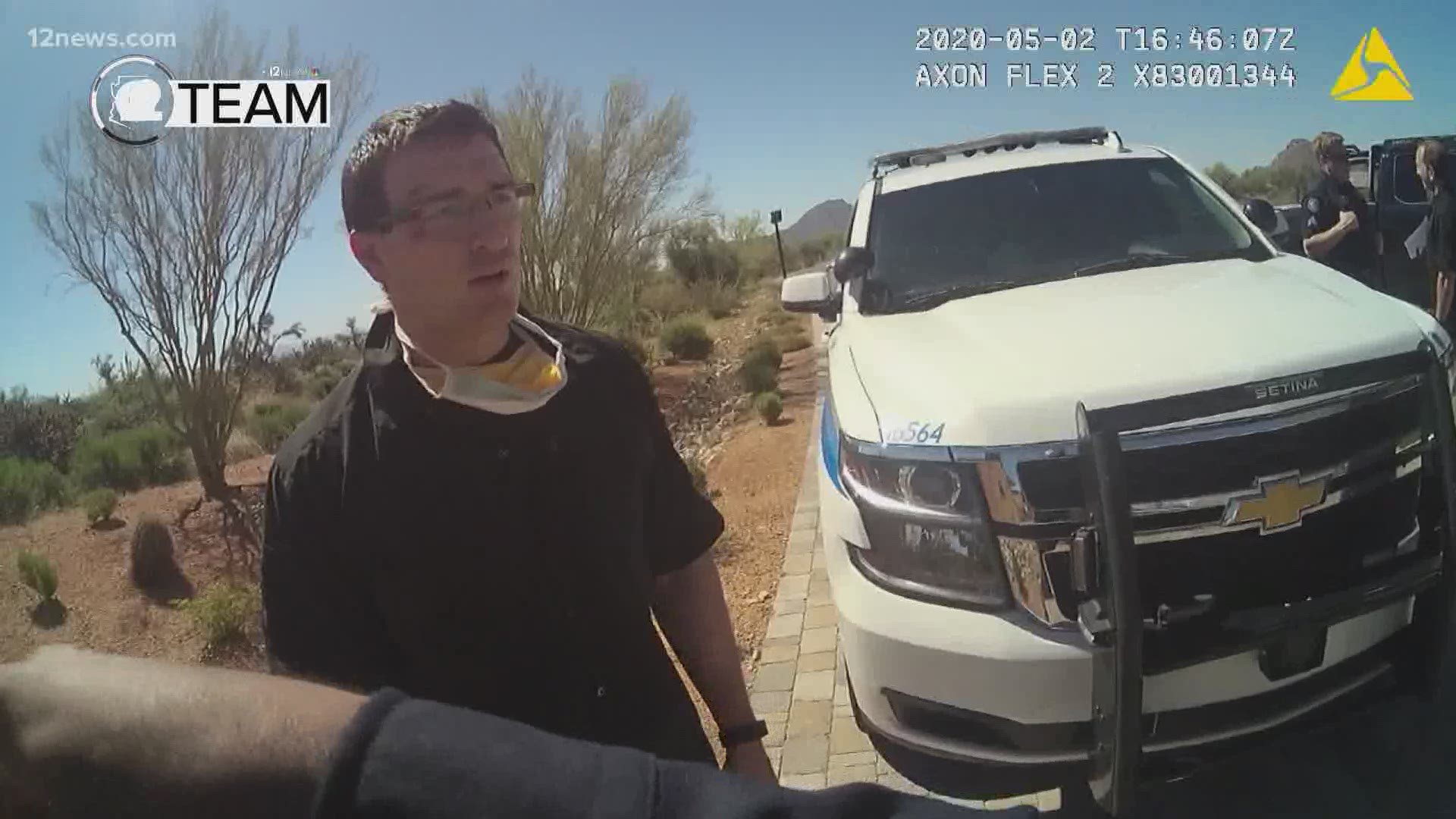 SCOTTSDALE, Ariz. — A Maricopa County Sheriff's deputy working an off-duty security job pulled his weapon on a cyclist during a confrontation on May, 12 News has learned.

Deputy Collin Seagraves has been with MCSO since 2011, and he was off-duty, working as a private security guard near Scottsdale National Golf Club when the incident happened.

Roger Bracken, a financial advisor, was riding his bike on the afternoon of May 2, when, he admits, he trespassed on private property.

"There used to be a little dirt trail that cut right across there to the trail system," Bracken said in a Zoom interview. "That's what I was trying to get to."

Bracken eventually encountered two security guards who were telling him to stop. Video provided by the City of Scottsdale shows Bracken turn around the guard station and begins to ride off the property. That's when Seagraves, who Bracken has already passed once on his bike, stands in the middle of the asphalt driveway.

"I'm trying to leave the premises. He's not going to do anything," Bracken recalls. "I'm trying to go around him to tell him that I'm leaving the property. He grabs me as I'm going by him, pulls me off of the bike. Now, remember, I'm in spandex and bicycle clips -- no outfit to get into any kind of a scuffle with."

In an interview seen on Scottsdale PD's body-worn camera video, provided to 12 News by Bracken's attorney, Seagraves says Bracken rode his bike directly at him. Seagraves claimed in a police report, provided by the Scottsdale Police Department, that Bracken leaped off of his bicycle to attack Seagraves.

What is not in dispute is what happens next. Bracken ends up on top of and behind Seagraves. Seagraves pulls his weapon.

According to Seagraves during his police interview, Seagraves was in serious danger from Bracken.

"As soon as he started slipping his arm around my neck, I put my gun in his chest to get him to calm down."

Bracken says he was never a threat to Seagraves and that he was the one in danger.

"I was waiting for the other security guard to get there," Bracken recalls. "I thought I've got an out-of-control security guard here. I need the other guy to help me. I was just holding him. If I wanted to hurt him, I would've jumped off and started swinging."

The other security guard, identified in the Scottsdale police report as Jason Siri, can be seen running toward the scuffle.

"He's like, 'Sir: you've got a gun in your stomach, and you're wrestling with a Maricopa County Sheriff['s deputy],'" Bracken remembers Siri saying. "What's scary to me is I was that close to [Seagraves] just pulling that trigger."

Bracken now stands accused of assault as well as trespassing. A plea agreement sent to Bracken by the City of Scottsdale requires Bracken to spend ten days in jail and pay Seagraves nearly $30,000 in restitution. A trial has been set for August 17th in Scottsdale City Court.

Bracken's attorney, Colin O'Sullivan, believes the charges should go the other way.

"We feel that Deputy Seagraves should be criminally charged from his actions in this case, and yet here we have Mr. Bracken facing an assault charge," O'Sullivan said.

Reached by phone, Deputy Seagraves said he could not comment on the incident.

12 News contacted MCSO and has learned that the department has begun an internal investigation into Seagraves's actions during the incident. MCSO would not comment further. But department policies state that an off-duty deputy should only pull his weapon if witnessing a felony or a serious misdemeanor.

12 News sent the video to an independent law enforcement consultant to examine. We asked if the deputy's use of force was consistent with best practices, as taught by departments around the Valley.

Stanley Kephart has nearly 40 years of law enforcement experience in three states. He agrees with the deputy’s decision to pull his weapon.

Kephart’s assessment of the video is that Bracken used his bike as a weapon, riding directly at Deputy Seagraves and putting him in danger as a result.

“Look at the video. My hands do not leave the handlebars,” Bracken said. “There’s no way I jumped on him. Why would I do that?”