Officers at the scene called the woman "looney toons" and an officer instructed other police officers to "CYA," or "cover your a**," in paperwork. 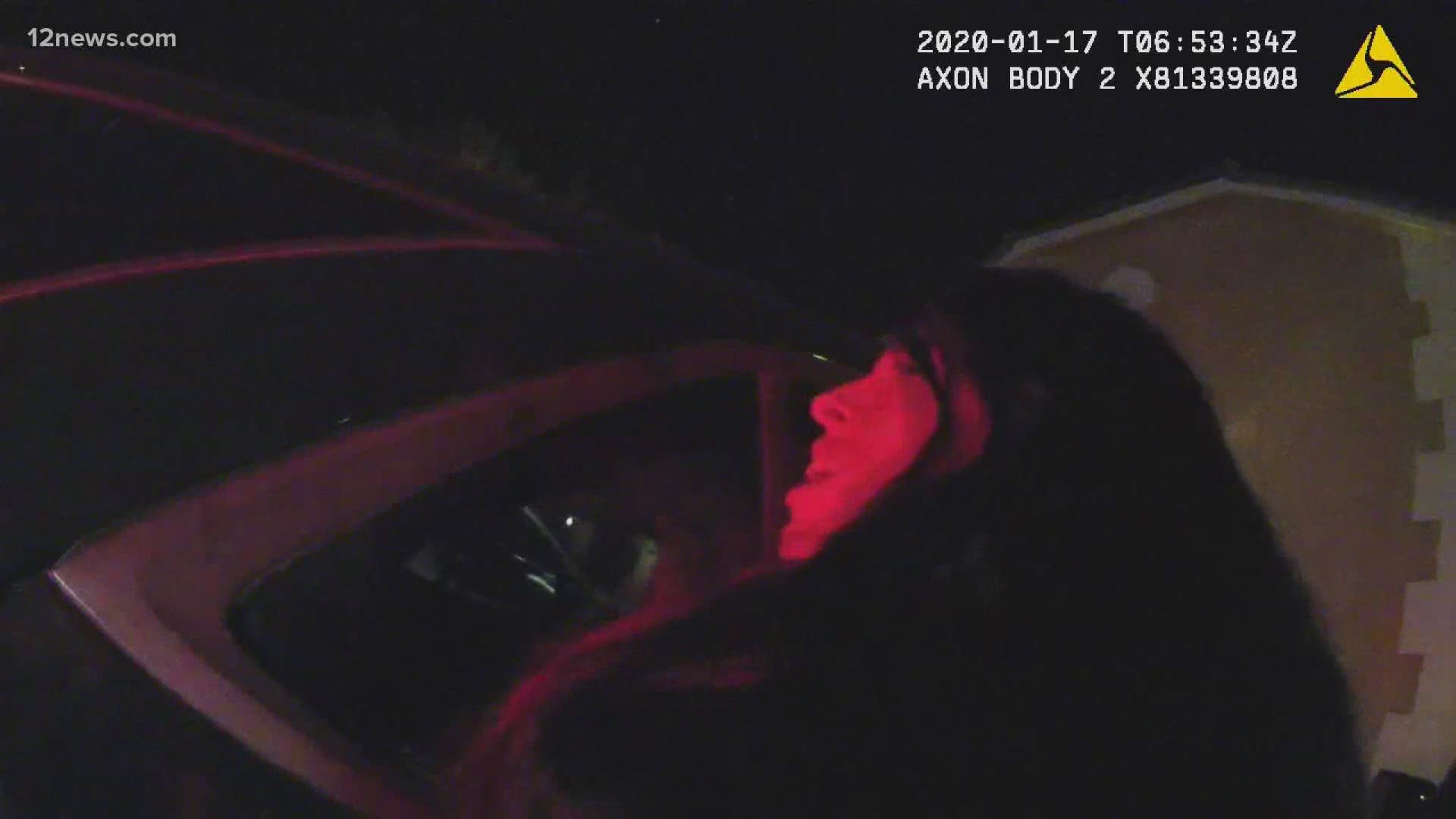 PHOENIX — A Phoenix police officer is being accused of misconduct after forcefully handcuffing a woman and shoving her against a car during a traffic stop, recently obtained body camera footage shows.

The officer, Michael McGillis, pulled over the woman, 23-year-old Mariah Valenzuela, for allegedly traveling the wrong way on a Phoenix road.

McGillis's body camera footage proceeds to show a confrontation between the two, which resulted in a head wound and "abrasions" to Valenzuela.

The footage shows McGillis pulling over Valenzuela in a parking lot and both of them exiting their cars in January 2020. The officer asks for her license, to which she responds that it isn't on her. McGillis then asks if she as any identification on her.

"Why am I getting pulled over?" Valenzuela asked in response after turning to her car. McGillis did not answer.

Valenzuela asks that question again repeatedly, with no answer from McGillis. Eventually, he tells her to put her arms behind her back, and a confrontation ensues.

Bodycam footage shows McGillis on top of her, handcuffing her, as she is screaming. Valenzuela’s lawyer says the cop barely gave her a chance.

"She asked, 'Why are you stopping me?' and he demands ID and when she doesn’t produce it...he goes and takes her and slams on the ground," lawyer James Palestini said.

The officer tells Valenzuela that he is arresting her for failing to show identification, a misdemeanor. She said that her identification is in her car and asks if she can get it.

The Phoenix Police Department said in a recent statement that officers reportedly never found identification in the car. They also said that "Valenzuela immediately became uncooperative" and resisted the arrest by pulling away and not placing her hands behind her back.

Footage shows the officer eventually pick Valenzuela up from off of the ground, tells her to stop arguing, and pushes her against the side of a parked car.

"Why don't you act like a young lady?" McGillis said to her.

"Officer McGillis pushed her against her car to stop her from resisting again," the Phoenix Police Department said in a statement.

Valenzuela was taken to a police car after numerous other officers arrived on the scene of the traffic violation.

In police reports Valenzuela’s lawyer gave to 12 News, she admits to having a drink and smoking marijuana that day. Valenzuela has a medical marijuana card and took a breathalyzer test.

Injuries on her were reported from the incident, including a "head gash" that one officer said "may need a stitch." The incident report completed by Phoenix police only lists her injuries as "abrasions."

Body camera video showed other officers at the scene calling Valenzuela "looney toons," an officer taking pictures of Valenzuela's abrasions joking about "taking a selfie," and an officer instructing other police officers to "CYA" or "cover your a**" in paperwork.

"It's stupid," one officer said to McGillis in a conversation about wearing body cams.