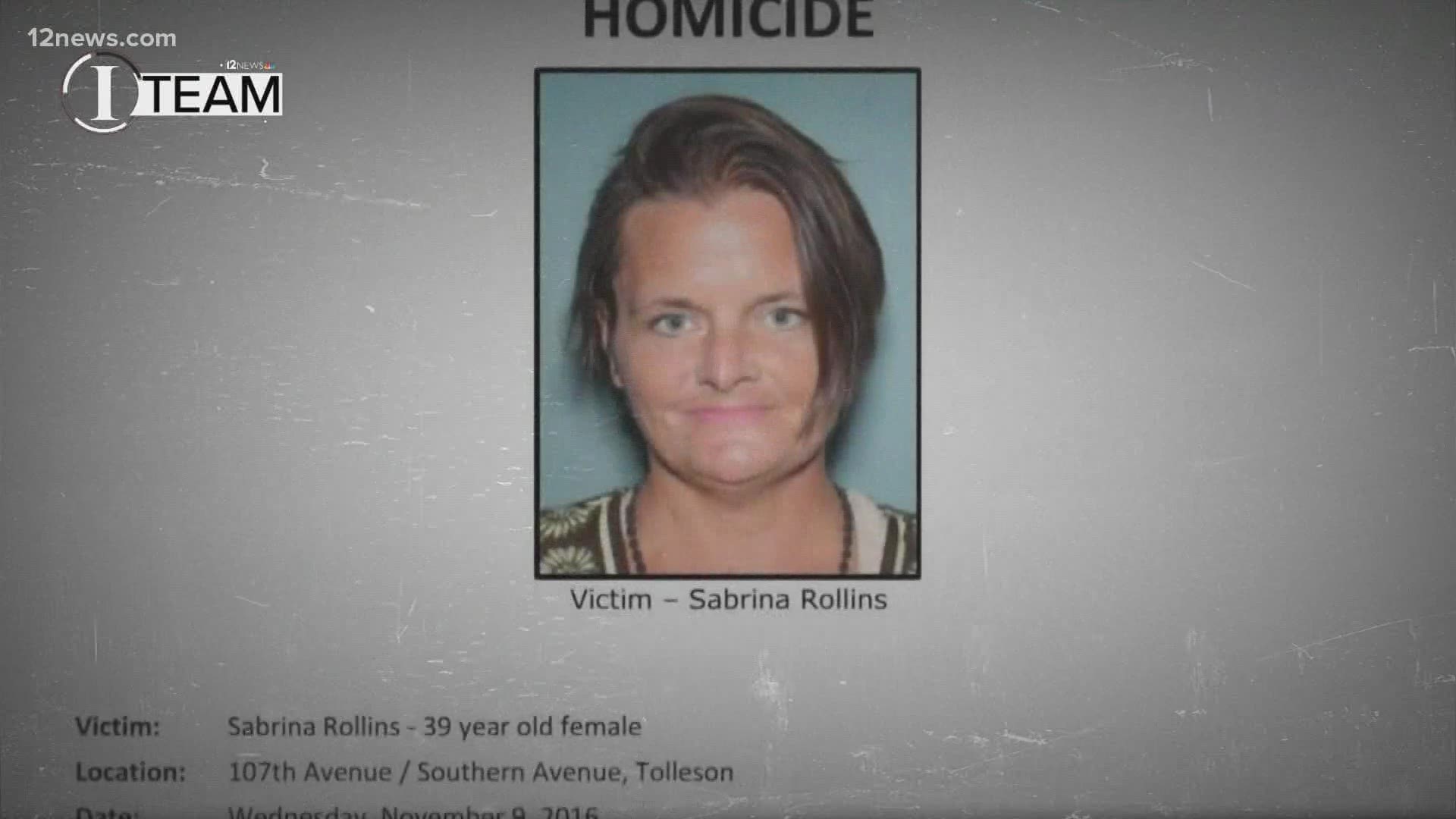 TOLLESON, Ariz. — For nearly four years, the death of Sabrina Rollins has been unsolved. But not any more thanks to familial DNA.

Foul play was clear from the start, according to a Maricopa County Sheriff's Office report.

Just before 7:30 a.m. on November 9, 2016, deputies were called to the area of 107th and Southern Avenues in Tolleson after someone found a body. It was 39-year-old Sabrina Rollins and she was wearing only socks and shoes and her head was on a concrete barrier.

She had been shot to death.

The body was identified as Rollins using her fingerprints. She had been released from the Lower Buckeye Jail just two days before her death.

Officers performed a sexual assault kit and submitted it to the Department of Public Safety's crime lab. A male DNA profile was found, but they weren't able to tie anyone to the murder at that time.

“In most cases, this is the law enforcement agency is submitting a cold case so the case is older so this is the last stop," said Vince Figarelli, the laboratory superintendent of the DPS crime lab.

Because they were at a dead-end, in April 2019, after talking with MCSO, the crime lab conducted a familial DNA search in the database that contains DNA samples of people arrested in Arizona and convicted offenders.

“We do a search of a database of convicted offenders and arrestees and we are looking for a relative of the perpetrator in that database," Figarelli said.

They got a hit.

In November 2019, the lab gave the results of the search to MCSO. The DNA showed a tie to a 29-year-old woman who served time in jail. Investigators started to look at her male relatives and focused in on her father, 60-year-old Tony Reed.

When contacted by detectives, Reed denied any involvement in Rollins' death, saying he may have been working on a fishing boat in Alaska at the time, but could not remember due to a stroke. 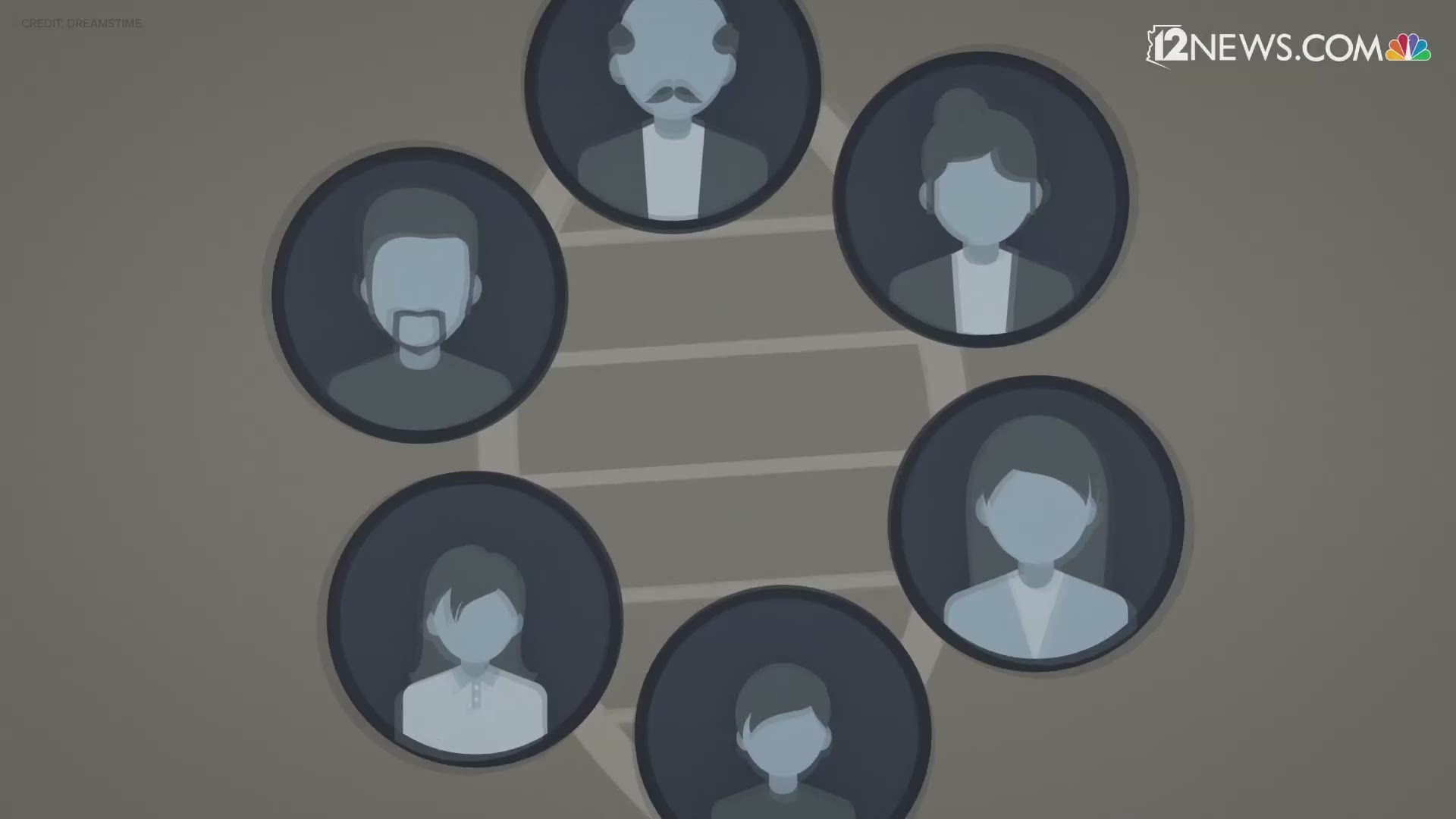 On March 2nd, MCSO was able to get a search warrant for a DNA sample, which was served two days later. The DNA test results came back on April 23, showing that Reed's DNA matched the DNA in the sexual assault kit.

Reed was arrested on April 24 and has been charged with second-degree murder.

“We’ve done about 15 cases and we’ve had a success rate of about 30 percent," Figarelli said.

The DPS crime lab is the only lab that does familial DNA searching in the state and they started back in 2017.

“It’s a labor-intensive technique. We do maybe twelve a year, ten to twelve or fifteen a year at the most and it’s expensive. It costs about $10,000 per case to do," Figarelli said.

But the cost has proved to be worth it in many cases.

In January, the Coconino County Sheriff's Office arrested David Louis Slade for two sexual assaults that happened nearly 20 years ago in Flagstaff and Utah. Both of the victims were young women and they were attacked in their own homes. Now, their alleged perpetrator is in custody.

RELATED: DNA ties man to sexual assaults that happened more than a decade ago, detectives say

The first time familial DNA ever led to an arrest in Arizona was in one of the Valley's most high-profile murders, Allison Feldman. Three years after her death in Scottsdale, police arrested her alleged killer after linking DNA collected at her crime scene to the suspect's brother who was already in prison.

Opponents are critical of giving law enforcement access to this kind of data which may be why Arizona is one of only twelve states using familial DNA.

Experts believe this high-tech tracking can lead to more crimes being solved and safer communities.

“The more samples that are in there, the more chances you have of getting a familial DNA hit," Figarelli said.